Before they were royal: The life of the Duchess of Cambridge 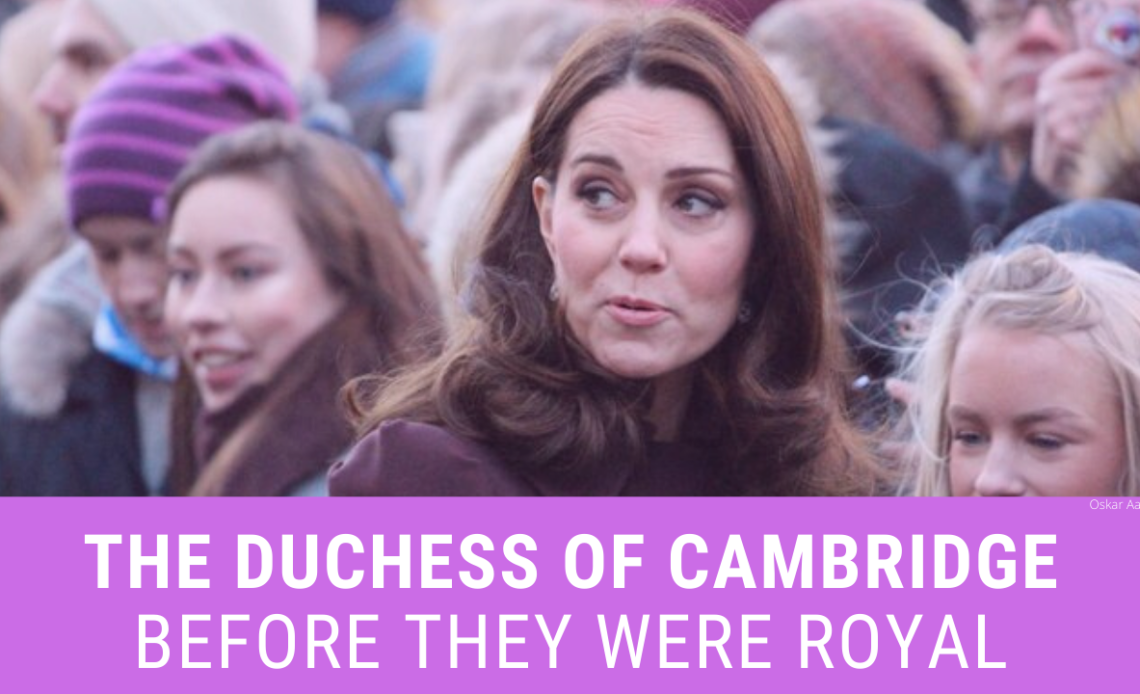 She’s the future queen consort, a mother of three – including a future king – and one of the most famous women in the world. But back in 1982, the future Duchess of Cambridge was just another baby in the nursery at Royal Berkshire Hospital.

Catherine Elizabeth Middleton was born in Reading, England, on 9 January 1982, the first child of Carole and Michael Middleton. A baby sister, Philippa (Pippa) came along a year later, and brother James was born in 1987.

Her parents met while working for British Airways, although Carole quit her job as a flight attendant when she was pregnant with Catherine. Carole came from a working-class background, a descendant of coal miners and the daughter of a builder. Michael’s relations from Leeds, on the other hand, attended the finest public schools and had ties to royalty.

Although Michael had a trust fund, the young couple wasn’t wealthy. Most of Mr Middleton’s money was earmarked to use for his children’s education. They lived in a modest but charming Victorian cottage in the Berkshire village of Bradfield, and Catherine experienced a happy and relaxed childhood there.

The Middletons moved to Amman, Jordan, in May 1984 for Michael’s job as a flight dispatcher with British Airways. Catherine attended an English nursery school there, and the family enjoyed exploring the region until they moved back to Berkshire in 1986.

The Middletons lived a fairly average life, but that started to change in 1987 when Carole founded Party Pieces, a mail-order party supply company. The business exploded quickly and the massive success of Party Pieces in years to come helped to change Catherine’s trajectory in life. But first, she was off to school.

Catherine was enrolled at St Andrew’s School, a co-ed preparatory school in Pangbourne. Sporty Catherine thrived there, excelling at activities such as hockey, tennis, swimming, rounders, and netball. She was the leading goal scorer for the hockey team and held the school high jump record of 1.50 m, which as of her return visit to St Andrew’s in 2012, remained unbroken.

Catherine, who was nicknamed “Squeak,” was a proud member of her local Brownie troop. She also enjoyed playing the flute and piano, singing, and performing in theatre, playing roles such as Eliza Doolittle in “My Fair Lady.” She loved St Andrew’s so much that Catherine recounted, on her 2012 trip to the school, that she’d told her mum she wanted to be a teacher there when she grew up.

1995 was a year of change for Catherine. Party Pieces continued to prosper and the family upgraded to a large home in the picturesque village of Bucklebury, while Catherine moved on to posh girls’ boarding school Downe House.

The environment at Downe House was utterly different from her happy times at St Andrew’s School. As a “day girl” who didn’t board there, Catherine never formed strong bonds with the other students. After experiencing severe bullying for two terms, her parents – now millionaires – moved Catherine to co-ed Marlborough College, one of the most exclusive schools in the country.

This time, it went more smoothly. Catherine was well-liked at the Wiltshire-based school, where she attended as a boarder. She achieved excellent A-level results in biology, chemistry, and art, and like many U.K. students, chose to take a gap year before university.

In September 2000, Catherine headed to Florence, Italy, where she studied at The British Institute. Eighteen-year-old Catherine attended lectures on the Renaissance and took Italian lessons in a 15th-century palazzo. Living amongst the city’s world-famous art and architecture gave Catherine plenty of material to fuel her passion for photography, and also to learn more about art history, which she’d go on to study at university.

She chose to travel to Chile for the second part of her gap year, taking part as a volunteer for Raleigh International. Her activities there included wilderness trekking, assisting British and Chilean scientists with analysing marine life, and helping to construct a new fire station. Ironically, Prince William attended the same programme shortly before her, with the two missing each other by just weeks. She rounded out her gap year by rowing on a Round The World Challenge boat in the Solent.

In September 2001, she started her first year at the University of St Andrews in Fife, Scotland. It was here that she met Prince William.

As fate would have it, Catherine wound up living in the same dormitory as William. The pair shared some mutual friends from her time at Marlborough College, and as art history majors (later, William would change to geography) they were in some of the same courses. They’d take runs before breakfast and spent time swimming and studying together, but the relationship was platonic and Catherine began dating an older student, Rupert Finch.

It wasn’t until Catherine famously appeared in a see-through dress in a 2002 student fashion show that William seemed to take notice of her romantically. But Catherine was still dating her boyfriend, and after William allegedly tried to kiss her that night, she rejected his advances. It wasn’t until Rupert Finch graduated and the future duchess was invited to share a flat with William and some friends that things changed.

During their second year, William and Catherine became a couple. But they were discreet, keen to avoid the press attention.

In 2004, the pair was outed after they were photographed on a ski trip together in Switzerland. By that summer, Catherine and William had taken a break, but they were back on by Christmas. The couple lived together at school in relative privacy until their 2005 graduation.

She went on to work for her family’s company, Party Pieces, and also worked as an accessories buyer for the British retailer Jigsaw.

Navigating the minefield of being a royal girlfriend was difficult, especially without the protection from press intrusion they were given at university. But unlike William’s mother, Diana, Princess of Wales, Catherine was given a leg up. William made sure she had access to the royal press office and was given tips on how to deal with paparazzi. She was also given her own protection officer.

With all signs pointing to an engagement, bookies were setting odds and giftware companies started working on royal wedding souvenirs. But it was not to be – at least not yet.

Prince William felt pressured and thought he was too young to get married, plus he wanted to focus on his military career. And after embarrassing photos of William partying with other girls were published, Catherine had enough. The two publicly called it quits around Easter 2007, only to reunite for good later that summer.

Secure in their relationship, Catherine stood by William’s side as he trained to become a Royal Air Force pilot. In June 2010, the couple moved in together near RAF Valley in Anglesey, Wales.

Finally, in the autumn of 2010, Catherine was “Waity Katie” no more. Almost a decade after they first met, William proposed to her on a romantic holiday in Kenya.

On 16 November 2010, the engagement of Prince William to Miss Catherine Middleton was announced. Their wedding took place on 29 April 2011 at Westminster Abbey, and she was given the title Duchess of Cambridge.

Now a mother to Prince George, Princess Charlotte, and Prince Louis, and wife to the second-in-line to the British throne, Catherine’s life has changed greatly. However, she has been able to tie her personal interests into her work with the Royal Family.

Tapping into her love of sport, art history, and her true concern for children’s mental health and wellness, she has been able to take on patronages such as the National Portrait Gallery, All England Lawn Tennis and Croquet Club, and Action for Children.

Whether it’s jogging with a pushchair in Kensington Gardens or popping into her favourite pub near Bucklebury, Catherine has retained the same down-to-earth personality as the young girl nicknamed “Squeak.”