Who is Black Rod – The Queen’s representative in Parliament? 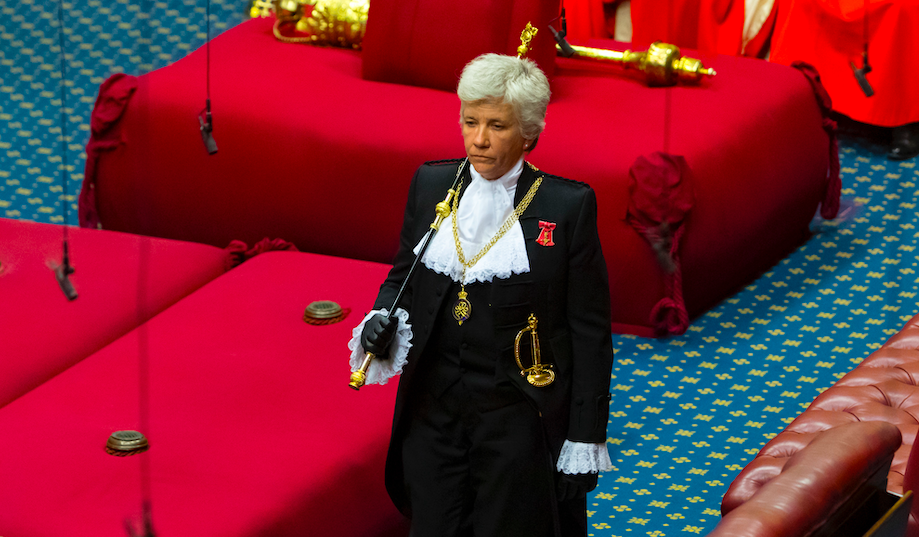 The Lady Usher of the Black Rod is a Royal Household member. She is appointed by the Crown by Letters Patent under the Great Seal of the Order of the Garter.

Black Rod, as she is known, is the Chief Lady Usher to the Sovereign and an officer of the Order of the Garter.

The primary duties take place at the Palace of Westminster where she is Serjeant at Arms in attendance upon the Lord Chancellor. She is accountable for discipline and security in the House of Lords.

Black Rod also executes ceremonial and other duties, and in 1971, the offices of Black Rod and Serjeant at Arms were merged.

The office of Usher can be traced back to around 1348. The first holder of record was William Whitehorse, who is cited in Letters Patent of 1361. Duties at that time were to bear his rod before the King and the Companions of the Order of the Garter during feast day processions as well as guard the doors during meetings.

Black Rod is still an officer of the Order of the Garter today and takes part in investitures and installations of new companions at the annual ceremony held in Windsor.

If one has watched a State opening of Parliament, then one is familiar with Black Rod dressed in in her black cutaway tunic, knee breeches, silk stockings, buckled shoes and white lace jabot (fancy ruffle) with her sword at her side.

She is a key figure in the State Opening of Parliament at the beginning of new sessions. She carries the ebony rod in her right hand, for which his title originated. At the top of the rod is a gold lion with its shield bearing Edward VII’s royal cypher and topped with a crown.

On the opening day of Parliament, Black Rod is sent off by Her Majesty to order the attendance of the Commons in the House of Lords. Upon her arrival at the Commons, the door is abruptly shut in her face representing the significant independence of the Commons from the Crown.

Watch in this clip: pic.twitter.com/uitSpPXu6f

She will then knock three times with her rod and is let in. On entering the Chamber, she proceeds to the middle of the House to the Speaker’s chair.

She makes three obeisance’s and then states: “Mr Speaker, The Queen commands this Honourable House to attend Her Majesty immediately in the House of Peers.”

The Speaker and the Commons will then be escorted by Black Rod to the House of Lords to listen to Her Majesty’s speech, which officially opens Parliament.

Black Rod is also Secretary to the Lord Great Chamberlain. She is, therefore, accountable for specific ceremonial duties and preparations for State occasions.

She also takes part in presenting new peers and is in charge of admittance of strangers. He employs the doorkeepers and, if, by chance, a case for contempt arises he executes the Orders of the House

The current Lady Usher of the Black Rod is Sarah Clarke who was appointed to the role in 2018.

Clarke is the first ever woman to hold the post in the 650-year history of the role. All of the previous 60 or so office holders were afforded the title of Gentleman Usher of the Black Rod.

Until Ms Clarke’s appointment, all of the previous Black Rods have been retired, senior military officers; but this is not a requirement of the job. The most important background for candidates is an extensive past in event management.

Sarah Clarke was previously the Championships Director at the All England Lawn Tennis Club, where she was in charge of organising and managing Wimbledon.

She had also held roles at four Olympic Games, the London Marathon and UK Sport.