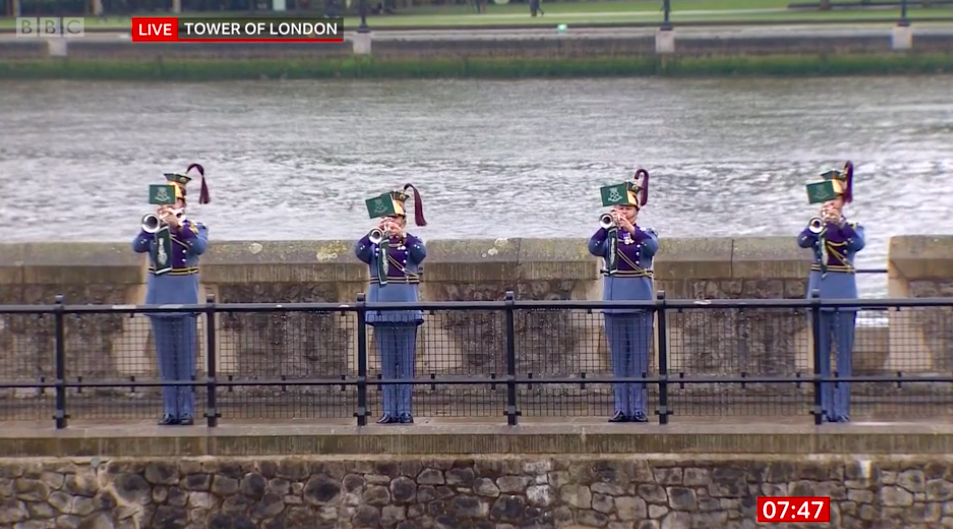 Trumpeters from The Band of The Royal Yeomanry played a very royal salute before the Tower of London’s Ravenmaster read out the name of their new female raven on BBC Breakfast. The votes are in, and the baby girl raven is to be called Branwen.

Four raven chicks were born at the Tower of London this spring, with one male and one female remaining at the Tower. Edgar, the male chick, was named after Edgar Allan Poe, author of The Raven, and the Tower held an online contest to name the female chick.

Ravenmaster Chris Skaife came up with a shortlist of names for the public to vote on during the #NameOurRaven competition, all “drawn from history, mythology, and famous tales from the Tower’s past.” Along with Branwen, the choices were Matilda, Brontë, Winifred, and Florence.

The BBC’s Carol Kirkwood asked if Skaife was happy with the name, to which he replied: “That is absolutely brilliant, yeah, I mean fantastic. She was the queen of ravens, queen of white ravens, queen of beauty and love. The raven with the green band over there Branwen, she’s all that and more.”

Branwen joins eight other resident ravens, including Edgar, Jubilee, Harris, Gripp, Rocky, Erin, Poppy and Georgie. Charles II is believed to be the first monarch to give special protection to the ravens of the Tower, after hearing the legend that the Tower of London will fall along with the Crown itself if the ravens ever leave.

When the population dropped to a single raven, Winston Churchill ordered the flock to be increased to a minimum of six at all times. Branwen and Edgar’s arrival means the Tower now has a healthy surplus of ravens, which is good news following a recent tragedy.

Merlina, one of the Tower of London’s ravens, disappeared earlier this year and is now assumed to be dead. “Merlina was our undisputed ruler of the roost, queen of the Tower ravens,” a statement read. “She will be greatly missed by her fellow ravens, the Ravenmaster, and all of us in the Tower community.”

Visitors to the Tower of London, which reopened today following the UK’s change in COVID-19 rules, can now see the ravens up close and personal again as they roam the fortress’s walls.