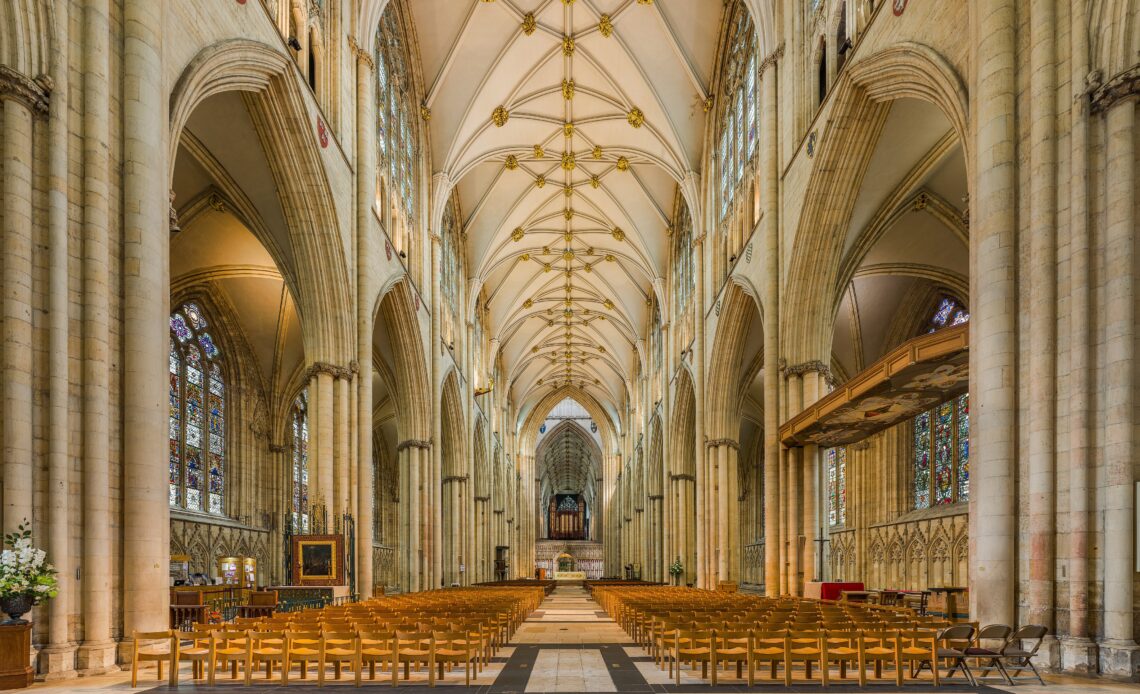 It’s one of the oldest churches in Britain the seat of one of England’s most important clerics yet the famous York Minster is a rare venue for royal weddings. Just two major regal marriages have taken place at this ancient church in almost 1,000 years.

The most recent took place sixty years ago. On June 8th 1961, the Duke of Kent married Katharine Worsley there in front of royalty from across Europe. The Minster was chosen for the ceremony as the bride had been born and raised in Yorkshire. She had met her husband to be, a cousin of The Queen, while he served with the Army at Catterick in Yorkshire.

Katharine walked down the aisle on the arm of her father. Sir William Worsley, followed by her bridesmaids including Princess Anne. The marriage was conducted by the then Archbishop of York, Michael Ramsey, with royal guests led by The Queen. Following the service, the couple headed to the family home of the new Duchess of Kent, Hovingham Hall, for a reception.

The royal wedding of the Duke and Duchess of Kent was the first at York Minister in over six hundred years. In the early 14th century, the church hosted its only other regal marriage and it would more than make its mark on history.

On January 24th 1328, the new King of England, Edward III, married Philippa of Hainault at York. The couple had been wed by proxy in Valenciennes three months earlier at a turbulent time for the young monarch.

Edward had become King in January 1327 at the age of fourteen when his mother, Queen Isabella, helped overthrow his father, Edward II. Isabella had de facto control of her son’s realm alongside her lover, Roger Mortimer. The marriage with Philippa was part of their plans to shore up power by creating strong ties with continental allies. The newlyweds began married life in a court riven by power struggles. In October 1330, just months after the birth of their first son, Edward III seized control of his kingdom and Philippa would go on to play a significant role in her husband’s personal rule.

York Minster is a rare royal wedding venue but the two marriages that have taken place there have had important places in the development of the monarchy at different times in its history.

You can read more about royal brides, royal weddings and romances in a new book by Royal Central. Royal Weddings: A Collection is available as an ebook and a paperback via Amazon.