Which royals are buried at the Crypt at Laeken? 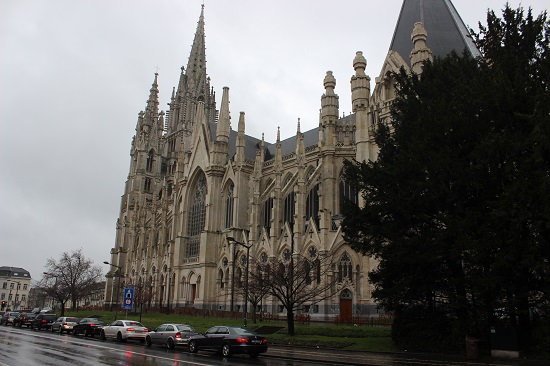 The Royal Crypt at Laeken (near Brussels) in Belgium is the final resting place of the Belgian royals. It is inside the Église Notre-Dame and was built in memory of Queen Louise of Belgium (born Louise of Orléans), who was the second wife of King Leopold I – who had previously been married to Princess Charlotte of Wales. The shared tomb of Louise and Leopold is the central point of the crypt.

Smaller alcoves are for Prince Charles, Count of Flanders (regent from 1944 until 1950), Marie of Hohenzollern-Sigmaringen, Countess of Flanders, her husband Prince Philippe, Count of Flanders and their eldest son Prince Baudouin (elder brother of King Albert I).

The tragic Empress Carlota of Mexico (born a Princess of Belgium) lies side by side with her elder brother Louis Philippe – who died before his first birthday – and Prince Leopold Emmanuel of Liechtenstein – the stillborn or short-lived son of Princess Margaretha of Luxembourg (herself a daughter of Princess Joséphine-Charlotte of Belgium) and Prince Nikolaus of Liechtenstein.

Prince Alexandre of Belgium – the half-brother of King Baudouin and King Albert II of Belgium – and Prince Leopold, Duke of Brabant – the only son of King Leopold II and his wife, Marie Henriette of Austria – were also buried there.

If you’re ever in the area, the crypt and the church are well worth a visit. Don’t forget to also visit the garden on the other side of the street, which is dedicated to Queen Astrid and has a lovely statue of the Queen who was taken way too young.