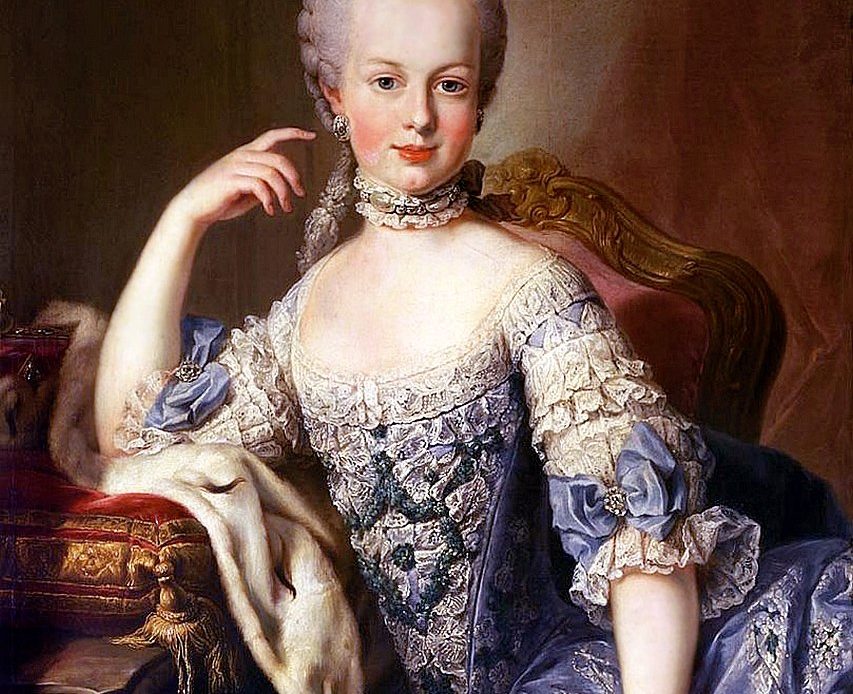 On 21 April 1770, a procession passed by the imperial summer palace of Schönbrunn, consisting of 21 state coaches, followed by 36 fine carriages, with a total of 450 horses and an accompanying personal suite of some 257 people. This was the beginning of a two and a half week journey for the future Marie Antoinette, already French Dauphine by proxy, from Vienna to Versailles.

She was the eventual embodiment of the Austrian half of the Treaty of Versailles, signed just a year after her birth, on 1 May 1756. This treaty, the result of an extraordinary volte-face in European foreign policy with the rapprochement of Austria and France, was helped by the political stance that Austria’s arch-enemy, Prussia, had taken with England. Because of the claims asserted by Frederick II on Silesia – a Hapsburg birthright – the subsequent invasion by Prussia of Maria Theresia’s dominions resulted in what became known as the War of the Austrian Succession, prompted through the sudden death of Maria Theresia’s father, the Holy Roman Emperor Charles VI in 1740.

Charles VI had made desperate attempts to get the European Great Powers to recognise his daughter Maria Theresia as his rightful heir because of his lack of any surviving male offspring. Indeed, the so-called ‘Pragmatic Sanction’ of 1713 was proclaimed by Charles VI four years before the birth of Maria Theresia, probably in an attempt to address the possible eventuality of his having daughters as the only children to succeed him.

The eleventh daughter of Maria Theresia and her fifteenth surviving child, Archduchess Maria Antonia Josepha Johanna, was known within the imperial family as ‘Antoine’. The diminutive of her name draws important attention to the French blood that flowed through her veins, her father Francis Stephen having been a Duke of Lorraine, though he was forced to renounce the duchy as part of the negotiations that eventually enabled him to marry the Archduchess Maria Theresia, receiving the grand Duchy of Tuscany instead by way of compensation.

The Lorraine connection – deeply significant for a future Queen of France – was rendered lesser by the fact that Lorraine was an independent adjoining principality and that consequently, any prince of Lorraine was not viewed in the same way as was a royal prince of France, or French duke. Thus, the way that the future Marie Antoinette’s ancestry was regarded was pre-set in French minds before her arrival, where she was known at the anti-Austrian French court as “L’Autrichienne”.

The sense of her being the daughter of Lorraine – a ‘foreign’, adjoining principality, meant that this underlined the sense of her being an “outsider” in French royal terms and thus unequal to its exacting demands of pedigree and etiquette. This, despite the fact that her blood-line included the second wife of ‘Monsieur’ – the younger brother of Louis XIV – the Orleans Palatine-born princess known popularly as ‘Liselotte’, her paternal great-grandmother. Francis Stephen, elected Holy Roman Emperor in his own right, spoke French as his only language throughout his life. Marie Antoinette’s own French would only ultimately improve with her hasty re-education, which sought to make good the gaps that for a future Queen of France, would desperately need to be filled, now it was clear she had been chosen. By the time that Marie Antoinette set out for France, her command of French was relatively fluent.

Had there been any other available archduchesses among Maria Theresia’s daughters, it would seem likely that any one of them could have been chosen. For when Marie Antoinette’s elder sister Josepha, intended for the royal throne of Naples, died suddenly of smallpox in 1767 she was simply substituted by her next sister, Maria Carolina, who did indeed travel to Naples and became the Neopolitan queen instead. Whatever the private loss to their mother, the Empress, marriage politics simply did not allow for personal emotion and the importance of these alliances meant that they were made to be upheld – so the name of one archduchess was simply replaced by another.

It was the equivalent of one name being ‘rubbed out’ and another inserted in its place. In Marie Antoinette’s own case however, there was no other archduchess available left from which to choose, as Maria Carolina – also briefly floated for the French marriage – was now in Naples, since 1768. Marie Antoinette was her mother’s youngest surviving daughter – and in 1770, she was aged fifteen.

Marie Antoinette’s wedding – “per procurationem” – took place at the Hapsburg Court Church of St Augustin, within the great Hofburg Palace’s Augustine Wing, on 19 April 1770, at six o’clock in the evening. Naturally, it was a proxy wedding as her bridegroom, the Dauphin Louis-Auguste, was awaiting her instead in France, and so, he was represented by Marie Antoinette’s brother, the Archduke Ferdinand, at the altar. The royal couple would not meet until Marie Antoinette arrived at Compiegne, where the marriage, already celebrated by proxy in Vienna, would enable the two to finally meet for the first time.

The choice of the St Augustin Church was an appropriate one – Marie Antoinette had been christened there, and it was also here that Maria Theresia had married Francis Stephen in 1736. It remained the favourite court Church of the Hapsburg family well into the next century – other important imperial marriages took place here, including that of Napolean Bonaparte to the Austrian Archduchess, Marie Louise, as well as most famously, that of Emperor Franz Josef I to Princess Elisabeth in Bavaria.

There is no record of Marie Antoinette’s marriage in the church today, nor is the altar the original one – instead, the church contains a huge memorial by the sculptor Antonio Canova to her eldest sister, the Archduchess Marie Christine, who was the exception amongst her sisters of being her mother’s favourite, a fact which enabled her in turn, to marry as an additional exception, the husband of her choice, Prince Albert of Saxe-Teschen. This was the cause of understandable embitterment to her other sisters that did marry, who were forced, for better or worse, to contract treaty marriages for the ultimate benefit of the State.

The imperial procession departed from Vienna at nine o’clock in the morning on 21 April 1770, and the famous long neck of Marie Antoinette, was reported by the son of her wet-nurse Joseph Weber, as “craning” out of the windows of her carriage to look again and again at the sight of the summer palace of Schönbrunn. The Marquis de Durfort had brought with him the two carriages which would transport Marie Antoinette personally to France – one decorated in crimson, the other in blue.

The distressing leave-taking scene is in some ways reminiscent of Mary, Queen of Scots’s fabled farewell to France, clinging to the part of the ship closest to the French coast as she sailed for Scotland – Mary, Queen of Scots being another figure in Marie Antoinette’s distant ancestry – yet these farewells were not supposed to mean return. As Antonia Fraser points out in her book, Love and Louis XIV, using the words of Louis XIV to the future Queen Marie-Luise of Spain, when she left for Madrid – “Farewell, for ever…” – meant that to return would ultimately mean royal failure. She was accompanied by Prince Starhemberg – Maria Theresia’s chief chamberlain, the Princess of Paar – her Mistress of the Court (Obersthofmeisterin), her ladies-in-waiting and maids-of-honour, together with chamberlains and whole accompanying court retinue, plus staff and servants. These included secretaries, lackeys, cooks and even more obscurely named servants, such as a sugar-inspector.

The procession had its afore-planned route, which had been worked out well in advance, to meet the necessary needs of both the practical and the ceremonial. Horses had to be ready at their posts to be changed when the procession met them en route. En route stops meant fireworks, music, triumphal arches, receptions, theatrical performances. In short, it was a justly apt preparation in more ways than one, for the court of Versailles, from where Marie Antoinette would write a mere two months after her arrival, “I put on my rouge… in front of all the whole world.”

Bells rang when the procession entered; canons were fired. Invariably for such a huge retinue, it was necessary to find places to stop overnight, which could accommodate the Dauphine as well as her suite, ladies-in-waiting and attendants. Often, monasteries and castles appear to have been chosen, as they represented places equal in size as well as importance which could be deemed worthy of receiving en route both an Austrian Archduchess as well as a future French Queen. As such, the roads had to be made passable, streets improved and food and fine cutlery sourced in enough quantity as would be needed.

Marie Antoinette’s journey would cross much of the Holy Roman Empire, of which her father had been Emperor in his lifetime, her mother being Holy Roman Empress also, albeit by marriage. Crucially, she would then be handed over formally to France as its future Dauphine, but this time in order to ‘become’ fully French, thereafter entering Strasbourg and then her father’s former duchy of Lorraine. Many of the cities and towns through which she passed would count the passing of her procession through them as a high point in their cultural history.

You can read all about those stops in the next installment of Elizabeth Jane Timms’ telling of the journey that took Marie Antoinette to France here on Royal Central.