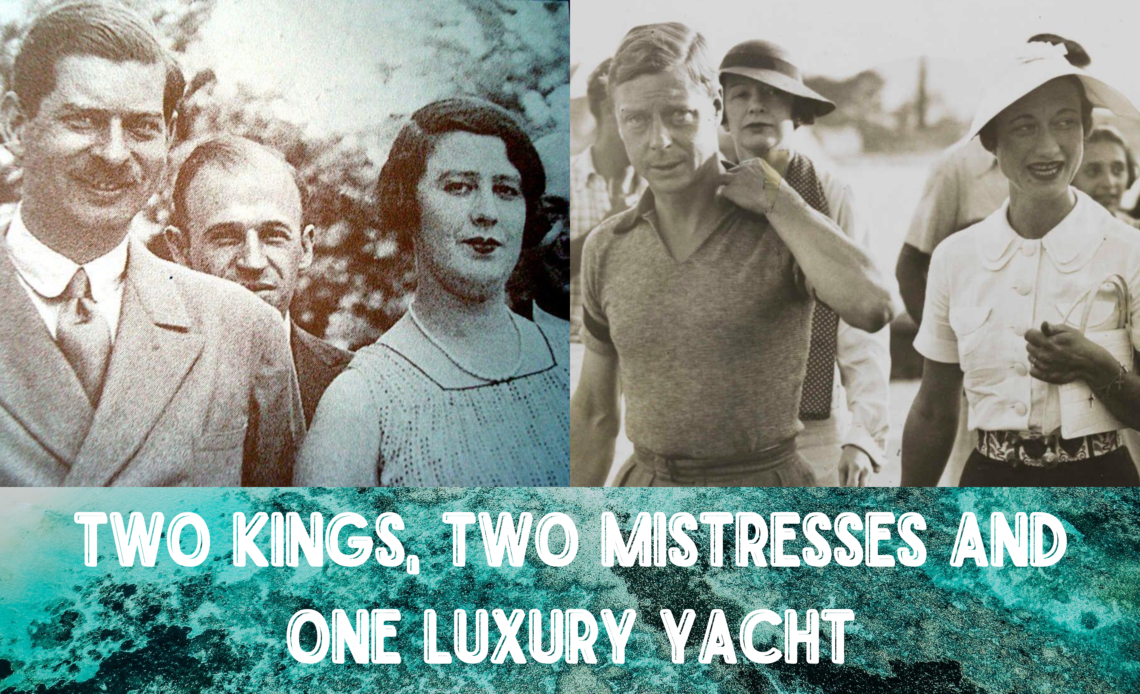 In 1937 King Carol II of Romania bought a luxury yacht called Nahlin, which he renamed Luceafarul (The Evening Star) and embarked on a romantic cruise with his mistress, Elena Lupescu. At the time, Elena, who was also known by the names of Lupeasca, Magda, and Duduia, had been Carol’s mistress for over twelve years.

Crown Prince Carol had married Princess Elena of Greece in March 1921, but very soon it became clear that they were a bad match. Known for his sexual promiscuity, Carol, apparently met Magda, a middle-class woman and daughter of an assimilated Jewish pharmacist, in 1923 when she was in her early twenties. She was already married to an army officer and was the mistress of a navy officer, but in their official narrative, the beginning of their affair falls on February 14 1925. Aware that he could never marry her because, according to Romania’s Constitution, royals could only marry royals from other countries, Crown Prince Carol left Romania in November 1925, and on December 28 he renounced his succession to the throne. It was his second abdication after, in 1918, he had renounced his rights for another woman, Zizi Lambrino, with whom he fathered a child. The marriage was immediately annulled by the Romanian Royal Family, and the child never was accepted.

Between 1925 and 1930, Crown Prince Carol and Elena Lupescu lived in a succession of places where they surrounded themselves with controversial industrial magnates and adventurers under the vigilant eyes of the spies sent by Romania’s government. From Italy, they moved to France, and then, in April 1928, they arrived in the country of birth of Carol’s mother – Great Britain. The British public was, of course, interested in the love story of a foreign monarch, and the two runaways, who weren’t known for their shyness, obliged. They proudly strutted around at various mondain occasions that culminated with their grandiose appearance at the theatre, where they were welcomed with thunderous greetings and cheers, and where Magda could show off her furs and jewellery. Their popularity was short-lived, however, after Scotland Yard discovered that the former prince, now a civilian called Carol Caraiman, was manufacturing political manifestoes in a cellar, plotting to make a comeback to Romania. Carol and his mistress were expelled from Great Britain to the utmost embarrassment of his mother, Queen Marie, former Princess of Edinburgh.

In 1930, Carol Caraiman returned to Romania, which, following the death of King Ferdinand in 1927 and the enthronization of little Prince Michael, who was barely five years old, was led by a Regency of three individuals. He dethroned his son, proclaimed himself king, and continued to live with a woman that everybody hated. By then, he had divorced Princess Elena of Greece and was hoping that he could modify the Constitution and marry his lover. Of course, that was easier said than done, especially considering the anti-Semitic climate of the time. They defied everybody and, by 1937, that woman was showing herself in public and at official events.

When King Carol II bought the Nahlin in 1937, his relative, Edward VIII, who was a year younger than him, was no longer king. Like Carol in 1925, he renounced the throne for a married woman, a woman who had many things in common with Carol’s lover. Both Wallis Simpson and Elena Lupescu were spoken about in very harsh terms by Palace courtiers—described as not only flirtatious, but almost as prostitutes, and the attribute most used in relation to them was vulgar. If one looks today at photos of the two women, one notices a common air, in spite of the dissimilarity of their features, maybe because of their silhouettes and fashion style. It must have been written in the stars that they would be somehow connected to the sea and the art of sailing because Wallis’s first husband was, like Magda’s lover when she met Crown Prince Carol, a navy officer, and her second husband, Ernest, to whom she was married when she met King Edward, a ship broker.

It was on the Nahlin that the fate of Great Britain was decided when King Edward VIII chose to take his mistress with him in the summer of 1936 on a tour of Eastern Europe on the Adriatic to visit countries that were either Nazi sympathizers or dictatorial regimes: in Greece, they met with King George who had just proclaimed a military dictatorship; in Hungary, Admiral Horthy gave the couple a royal welcome, and so did President Ataturk of Turkey, while in Yugoslavia, the official motorcade is said to have frightened the local peasants, scattering them away with its dangerous speed.

For diplomatic reasons, King Edward had decided to use the Nahlin rather than the royal yacht Victoria and Albert. The yacht, built in 1930 in Glasgow at the order of the richest aristocrat of the time, Lady Henrietta Yule, was truly luxurious. It boasted six guestrooms with bathrooms, an office, a ladies’ sitting room, a gym and a library, from where the king removed several shelves of books and replaced them with alcohol. When King Carol II bought the yacht a year later for £120,000, he was no doubt aware of its past, and sentimental as he was—yes, he was both sentimental and sexually promiscuous—liked to imagine that the karma of the love story between another king and his mistress may rub off on him and his own lover.

In 1938 King Carol II took Magda with him on a holiday cruise, and on this “love boat”—as some called it—he fell to his knees before her and swore her eternal love—or so she claims, and who are we to doubt it? Two years later, King Carol abdicated under the pressure of the fascist Iron Guard, leaving the country in the hands of his 18-year-old son, Crown Prince Mihai (Michael), and in January 1948, King Mihai too was forced to leave the country by the Soviet-backed Communist regime. The yacht was appropriated by the Minister of Culture and transformed into a floating restaurant until the anti-Communist revolution in 1989, when the yacht embarked on a new odyssey, going through several owners until, back in Great Britain, it began a process of restoration. In 2010, entirely restored, it was recommissioned again as the Nahlin and registered again in Glasgow. The love boat has returned to its origin. As for the two couples, contrary to all predictions, they appear to have lived (more or less) happily ever after.