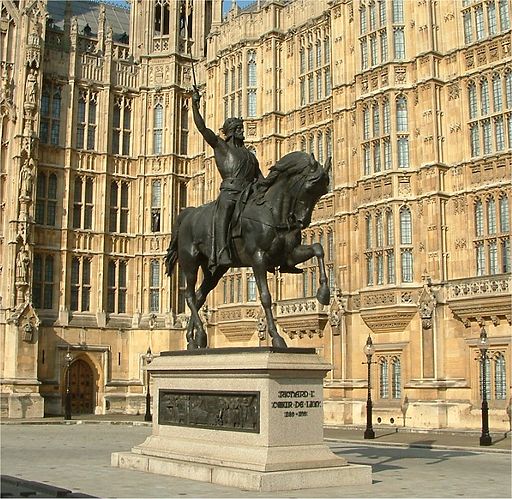 He spent little time in England but one very famous king’s emblem is now on the lips of millions in the country he ruled but rarely visited. Football fans across the land are singing ‘Three Lions on a Shirt’ and it’s all thanks to Richard I.

Appropriately known as Lionheart, Richard was the first English king to put a hat trick of lions on his coat of arms and his choice became the standard royal standard.He ruled England between 1189 and 1199 and by the final stages of his reign, the three lions were firmly in place on the Great Seal. Even though he died with no children the following year, his choice of emblem lived on.

He collected his menagerie of menace through accidents of ancestry. His great grandfather, Henry I, used a single golden lion as an emblem for the first part of his reign. When he married for a second time, he adopted a lion from the family crest of his new bride, Adeliza of Louvain. Two lions doesn’t have quite the same ring, though.

Fast forward a few decades and Richard was getting ready to choose an emblem of his own. He was the son of King Henry II of England and Eleanor of Aquitaine and his powerhouse of a mother also had a lion on her own family coat of arms. So Richard added a third lion to his personal crest and suddenly, we’re singing.

The three lions proved so popular that they reigned supreme on the English royal arms for over a century until Edward III added in some French lilies. But despite alterations and additions ever since, the three lions have always remained an integral part of the arms.

They ended up on England shirts when the Football Association was looking for an emblem for the kit its players would wear at international games in the late 19th century. They settled on the three lions and presumably gained royal permission (as this was 1879, that must mean that Queen Victoria was somewhat amused at the idea).

Look closely and you’ll see the lions have company with more royal links. There are also ten Tudor roses on the badge worn proudly by England’s footballers but, for some reason, the floral motif has never been as famous.

And so, as Wembley welcomes England for their biggest game in almost six decades, it’s the cry of three lions that will echo in the London air. Let’s hope football is slightly keener to come home than Richard I, the King of England who spent less than a year in his realm but whose lasting legacy is a crest that now unites millions of people in hopes and dreams.