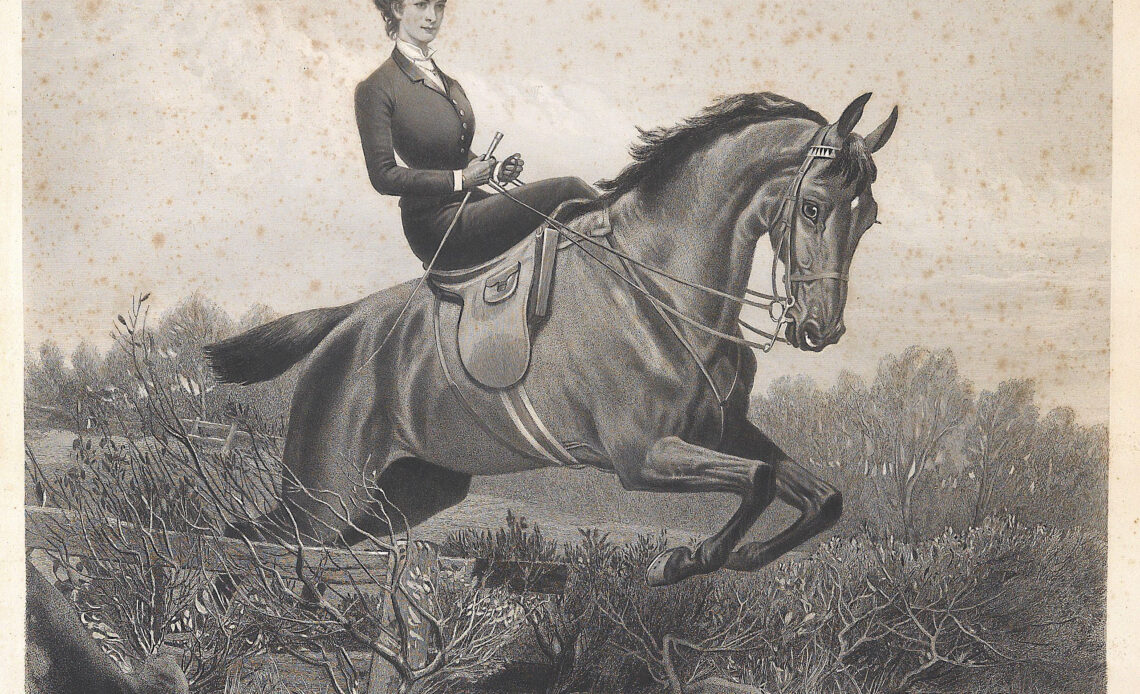 The spectacular beauty of the Empress Elisabeth of Austria (1837-1898) was a reputation which, once created, had to be determinedly maintained. This was only achieved through rigorous beauty and exercise regimes, which she adopted as her personal discipline. The Empress, who would go on to become what was probably the most brilliant horsewoman of nineteenth-century Europe, was often stitched into her riding habit, to emphasise her small waist – said to have remained at 50 centimetres for the rest of her life. Her one-time favourite niece, Countess Marie Larisch, would remember her beautiful aunt much later, in her memoirs, confirming that ‘her costume looked as if it had been moulded to her’.

Most untypically for a woman of her time, royal or otherwise, Elisabeth was passionately interested in physical exercise and incorporated it into her daily timetable. The Empress’s regular hunger cures and fitness programmes were undertaken to ensure that her figure remained slim; this has, in turn, become part of Elisabeth’s own mythology. True also, was the fact that she adored pastries and confectionary and had a particular liking for candied violets, supplied by the former court purveyor for sweetmeats, A. Gerstner on the Kärntnerstrasse, in Vienna’s first district. Indeed, on the very day before her assassination in Geneva, she visited a favourite pastry shop.

Elisabeth’s love of sport and exercise was something which belonged to her childhood in her native Bavaria, but it became also an exercise to challenge her imperial role and the rigid constraints of court etiquette. She enjoyed fencing and swimming and her fast marches – in all weathers – became legendary. Elisabeth weighed herself sometimes up to three times each day, writing each weight down in a book. Her height was 173 centimetres, her weight reportedly somewhere between 45 and 46 kilos, never exceeding 50. One of the statues in the Hofburg enables us to fully appreciate Elisabeth’s physicality, as it was sculpted according to Elisabeth’s recorded measurements. One of the weighing scales which she may have used is now preserved at the Hofburg. Her alleged hip measurement of 62 to 65 centimetres may, however, be inaccurate (Brigitte Hamann, The Reluctant Empress, p. 127, Alfred A. Knopf, 1986).

Countess Marie Larisch – whose memoirs are a record of both self-defence and betrayal – wrote down private details about the Empress’s daily regimes, which were published in 1913 – in Berlin as Meine Vergangenheit by Fontane and in English as My Past by Eveleigh Nash. She also wrote a book entitled Kaiserin Elisabeth und ich [Empress Elisabeth and I], later published in Leipzig in 1935 by Goten-Verlag Herbert Eisentraut. According to her in My Past, ‘Elisabeth was always laced into her corsets, a proceeding which sometimes took quite an hour. Her silk stockings came from the London firm of Swears and Wells, and in those pre-suspender days, the Empress attached them by ribbons to her corset… A passion for walking for four or five hours winter and summer alike was part of her daily life, and Elisabeth could even do nine or ten hours at a stretch without being fatigued…’ (Countess Marie Larisch, My Past, pp. 78-9, London, Eveleigh Nash, 1913).

Grace’s Guide lists Swears and Wells at 192 Regent St, London; they were outfitters and suppliers in particular, of hosiery and gloves (today the premises of a sportswear shop). In keeping with her beauty regime, the Empress apparently “often slept with wet towels round her waist in order to keep its proportions slender” and slept on an iron bedstead in her bedroom in the Hofburg, lying flat without a single pillow in the belief that it somehow, maintained her figure.

The beauty cult of Elisabeth bloomed fully in the 1860s and created its own legend, which the F. X. Winterhalter portraits have helped to perpetuate. Prior to her engagement to Emperor Franz Josef, her mother Ludovika, Duchess in Bavaria had worried that she might not even find a suitable groom, writing in April 1853 to her sister, Queen Marie of Saxony: “True, she’s pretty because she is very young and animated, but she has no single pretty feature” (cit., Hamann, p. 4).

Before the betrothal took place that August, the enraptured Emperor confided to his mother, Archduchess Sophie: “How sweet Sisi is… what a magnificent crown of hair frames her face! What lovely, soft eyes she has, and lips like strawberries” (cit., Ibid, 13). Far from just attracting a merely suitable groom, Elisabeth became engaged to royal Europe’s most eligible bachelor.

Particularly remarkable in this physical regime were Elisabeth’s gymnastic exercises. In this as in so much else, the Empress was at odds with the gendered role of any woman of her century, let alone her rank. Typically, Elisabeth rebelled against the confines of such stereotypes and deliberated provoked the disapproval of the Viennese court, thereby reasserting the free spirit of her Bavarian girlhood and youth. Elisabeth’s beautiful sister, Marie Sophie, ex-Queen of Naples, behaved likewise, by swimming naked and smoking in public. The Viennese court was deeply shocked when it learnt that Elisabeth had installed gymnastic apparatus in her Dressing Room at the Hofburg, giving it the dual purpose by which it is still known today – the Empress’s famousToilette- und Turnzimmer [The Dressing and Exercise Room].

Elisabeth’s day at the Hofburg would begin in this room, as early as six o’clock in the morning in the winter, with minor exercise before breakfast. Historic photographs of this room made in 1899 – the year after her assassination – show her gymnastic equipment still in situ, recording its appearance for posterity. The walls of this room were decorated with pictures of her dogs and photographs of her family, including her beloved fourth daughter, Archduchess Marie Valerie, and a portrait of the poet Heinrich Heine, whom the Empress greatly admired. Elisabeth’s rings have survived, together with her wall bars and high bar. She used these, and dumbbells – as she said – en passant, with an actual gymnasium built in the Hofburg for more rigorous physical training overlooking the Schauflergasse, between Elisabeth’s own Amalienburg Wing and the (since demolished) Court Hospital.

All this shows us Elisabeth’s almost pitiful determination to maintain an iron grip on her body and so to hope force off the natural signs of ageing, supposedly damaging the reputation for beauty she had so worked so hard to earn. It is clear that with her extraordinary beauty came an extraordinary pressure to keep it so. For in her fifties, Elisabeth was recorded by Countess Larisch as having remarked: “As soon as I feel myself aging, I shall retire from the world altogether… perhaps later, I shall always wear a veil, and even those closest to me will no longer see my face.” Sadly, this became the case.

After the age of thirty, Elisabeth refused to be photographed, and the few pictures that do survive are snapshots for which the Empress did not pose. In later years, her fans and parasols became the means for the shy Empress to escape the curious gazes of onlookers. With the tragedy at Mayerling in 1889 and the death of her only son, Crown Prince Rudolf, the Empress took to wearing nothing but black, distributed her jewellery and became a veiled shadow, wandering restlessly about the world. It is one of the tragedies of Empress Elisabeth that the beauty which enabled her personal liberation and confidence became its own kind of torture. The Empress became a prisoner of her own beauty myth, whose cult she had herself helped to establish.

One eyewitness of her famous gymnastic endeavours was her devoted Greek reader, Constantin Christomanos, who faithfully wrote down everything she said. His account of Elisabeth on New Year’s Day 1892 retains something of the astonishment of what he saw that morning at the Hofburg: “At the open door between the salon and her boudoir, ropes, bars, and rings were installed. When I saw her, she was just raising herself on the handrings. She wore a black silk dress with a long train, hemmed with magnificent black ostrich feathers. I had never before seen her so imposing. Hanging on the ropes, she made a fantastic impression, like a creature somewhere between snake and bird’” (cit., Hamann, p. 139).

The Empress seems to have taken pleasure in the impression she made, remarking only that “if the archduchesses knew that I did my exercises in this dress, they would turn to stone” (cit., Ibid, 140). Unlike the Prussian princess Marie, Queen of Bavaria, who designed a special outfit for her mountain exercise with matching trousers underneath, the Empress clearly considered a morning dress acceptable for minor exercise en passant. Equally possible is that the Empress may have simply preferred to stay in her morning dress on the occasion in 1892, to save changing.

Today, the park at Schönbrunn Palace is one of the most popular places for the Viennese in which to jog. Typically, the Empress preferred those parts of the park which the public disliked but admired the triumphal, Classical Gloriette. The park in its own way helps to keep alive the tradition of Elisabeth’s physical regime. In Schönbrunn, she had a spiral staircase installed in her study, to enable her to flee the palace unobserved. We must suppose that the park represented for her, an escape from perceived confinement.

The obsession with physical movement was in itself symbolic also, of her internal restlessness. Whether it was walking or travelling, the Empress was on the move, rarely anywhere for long. This makes for me, at least, the 1873 luxury court railway carriage ensemble – constructed for Elisabeth in Prague-Smichov and preserved in Vienna’s Technisches Museum – symbolic of Elisabeth, unlike any other. Needless to say, it was beautifully appointed.

It was, however, not simply to fulfil her own aims for beauty, but because for her, it surely achieved those words ascribed to Confucius: ‘Der Weg ist das Ziel.’ [‘The journey is the destination’]. The rest of this phrase is also highly appropriate to Elisabeth: ‘Wenn das Ziel fern ist, ist der Weg lang’ [‘And if the destination is far-distant, then the journey is long’].