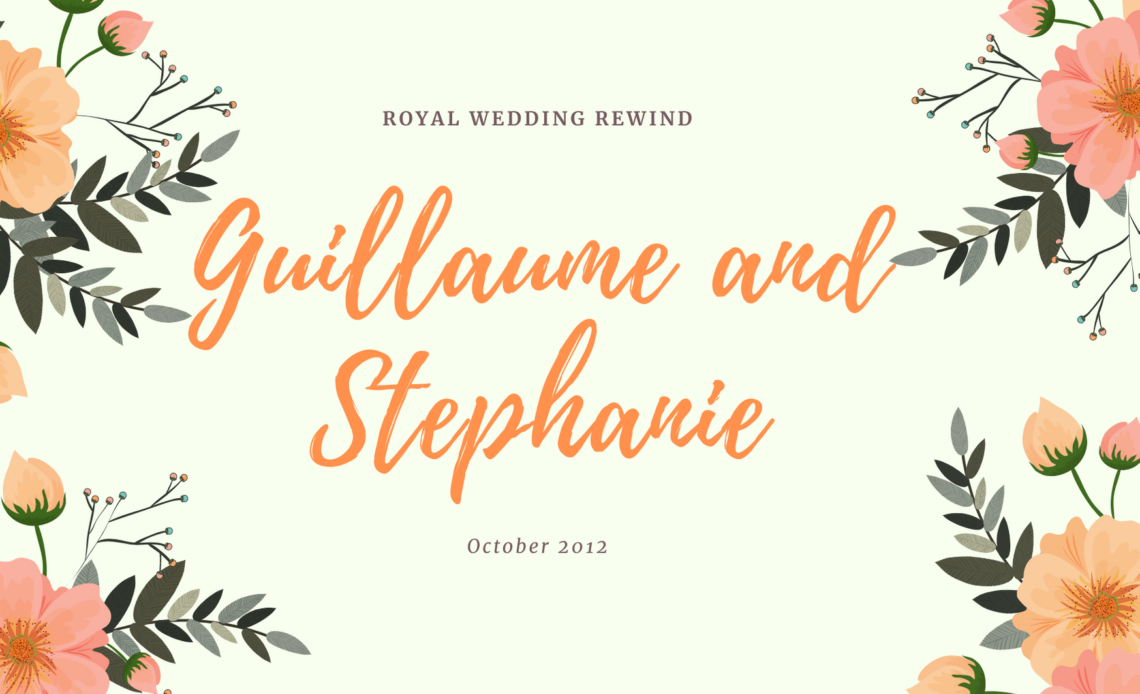 The couple, who announced their engagement on 26 April 2012, tied the knot at Luxembourg City Hall where the then Mayor of Luxembourg City, Xavier Bettel, conducted the ceremony which was attended by the couple’s immediate families and members of the government. Wearing her long, blonde hair on her shoulders, the bride (then 28) sported a cream Chanel suit with pearl earrings while the groom (aged 30) wore a dark suit and a blue-red-and-white striped tie. A gala dinner followed at the Grand Ducal Palace.

A day later the Catholic religious service took place at the Cathedral of Notre-Dame of Luxembourg in the presence of the couple’s families and many European and non-European royal families, ruling and non-ruling. Among the guests were Princess Lalla Salma of Morocco and the then-Crown Prince of Japan, all brought to Notre-Dame Cathedral in a minibus. The United Kingdom was represented by the Earl and the Countess of Wessex, the latter wearing a black-and-white dress with printed horses.

Stéphanie’s hair was done in an elegant updo and she wore the Lannoy tiara. She also wore her late mother’s engagement ring; her mother died just two months before the nuptials and the ceremony began with a minute of silence in her honour. Her wedding gown, designed by Elie Saab, was made of ivory lace, embroidered with what appeared to be silver thread leaves. It had three-quarter length sleeves and a long train. Her veil, made of ivory silk tulle, was carried by six cute, blue-dressed pages and bridesmaids and she carried a bouquet of white orchids.

The bridal attendants included the Hereditary Grand Duke’s nephew, Prince Gabriel, as a page boy and Guilluame’s younger sister, Princess Alexandra as a bridesmaid. The Hereditary Grand Duchess’s nieces and nephew also served as bridesmaids and pageboy. Stéphanie was walked down the aisle by her eldest brother, Count Jehan.

The ceremony was officiated by Cardinal Jean-Claude Hollerich, Archbishop of Luxembourg, who would go on to conduct the baptism of the couple’s first child, Prince Charles Jean Philippe Joseph Marie Guillaume (b. 10 May 2020) almost exactly eight years later, on 19 September 2020.

Prince Charles was baptised at the Abbey of St. Maurice de Clervaux, surrounded by his closest relatives, who wore masks when they entered the Abbey, as did the clergy. His godmother was Stéphanie’s sister, Gaëlle, and his godfather was Prince Louis, one of Guillaume’s brothers. The little prince is second in line to the throne of Luxembourg and is expected to one day succeed as Grand Duke.