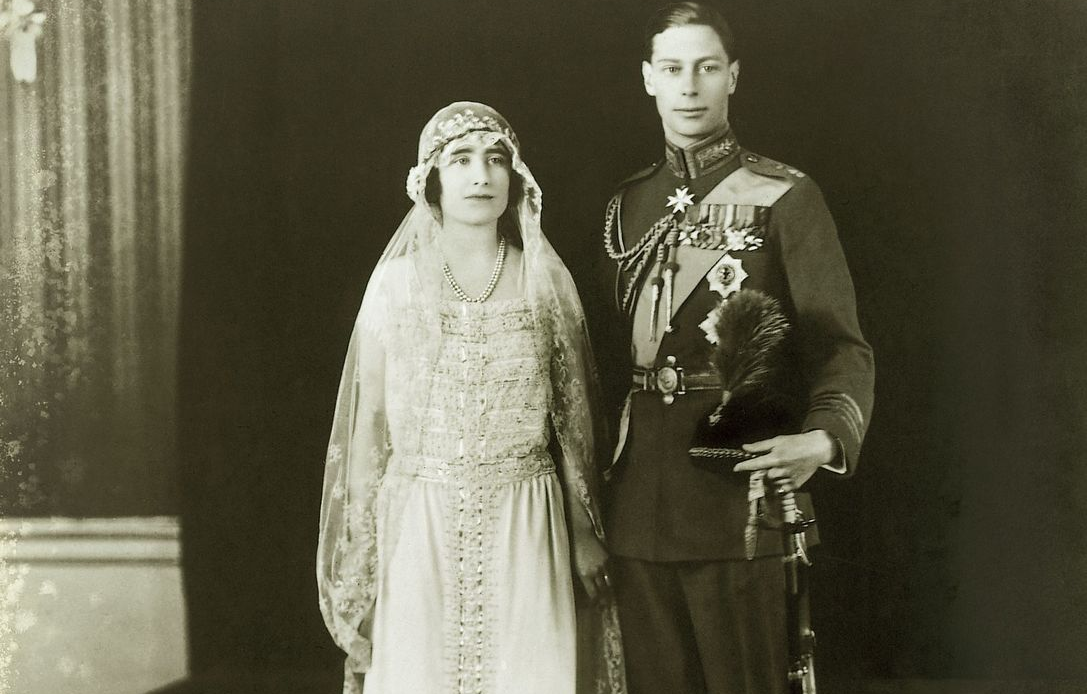 It was a wedding that changed the course of royal history. When Albert, Duke of York married Lady Elizabeth Bowes-Lyon on April 26th 1923 at Westminster Abbey, a partnership that would prove vital to the very survival of the British Monarchy was cemented. The couple, and those watching as they wed, had no idea of just how significant the day would prove to be. For this turned out to be a monarchical marriage and the wedding of not just a Duke and Duchess but of a king and his consort, of George VI and his Queen Elizabeth.

At the time, it was seen very differently. Albert, known to his family as Bertie, was second in line to the throne. But there was every expectation that his dashing elder brother, Edward, Prince of Wales, would soon follow him down the aisle and produce a nursery of royal babies to push Bertie down the succession. The groom’s father, King George V, was also concerned about the political and economic situation in Britain and decided against publicly funded street decorations or building extra seating platforms in Westminster Abbey, as had happened when his daughter, Mary, had wed the year before. But schoolchildren were given the day off while the Navy prepared to fire salutes in honour of the couple.

And the bride and groom were popular figures. While Bertie’s shy and gentle character had brought him support, it was his fiancee who was winning hearts. Lady Elizabeth Bowes-Lyon, daughter of the Earl and Countess of Strathearn, had turned her royal suitor down twice before agreeing to become his wife. But almost as soon as their engagement was announced, she began to charm a public ready for a new royal star. In the days before her wedding, she attended countless receptions and events in her honour, acquiring more fans as she went about it. By the morning of her wedding, huge crowds had gathered to cheer her on her way to the Abbey.

Not even the persistent spring showers put people off. The routes around Buckingham Palace, Westminster Abbey and the bride’s family home at Bruton Street in Mayfair were packed. And they enjoyed a very regal display. For not only was the newly renamed House of Windsor out in force, there were plenty of European royals for the crowds to cheer. King Haakon VII and Queen Maud of Norway, uncle and aunt to the groom, were joined by King Alfonso XIII and Queen Ena of Spain as well as Queen Marie of Romania. The King and Queen of Denmark and the King and Queen of the Hellenes could also be found in the congregation which numbered almost 1,800.

The groom arrived in the dress uniform of the newly formed RAF with his older brother, called David by his family, acting as his best man. The bride travelled from Bruton Street to the Abbey in a landau accompanied by her father who walked her down the aisle with a group of eight bridesmaids in attendance. The ceremony was conducted by the Archbishop of Canterbury, Randall Thomas Davidson, and the Archbishop of York, Cosmo Lang, with the bride making her entrance to the hymn, Lead Us, Heavenly Father, Lead Us.

Elizabeth had chosen an ivory gown by Madame Seymour-Handley of Bond Street. It was more a nod to popular fashion than traditional royal wedding gowns, featuring a dropped waist and discreet train. The dress was made from chiffon moire and featured embroidery in gold with beads and pearls. Her veil, of point de Flandres lace, was lent to her by Queen Mary and held in place with flowers including white roses for the House of York, heather in tribute to her family’s Scottish heritage and myrtle leaves, a traditional addition for all royal brides since the reign of Queen Victoria. She carried a bouquet of white roses but famously stopped to lay them on the Tomb of the Unknown Soldier as she arrived at the Abbey.

Following the ceremony, the new Duke and Duchess of York rode through the cheering crowds to Buckingham Palace where they enjoyed a wedding breakfast featuring salmon, lamb and a strawberry pudding named for the bride. There was also a balcony appearance before they left for honeymoon through a packed courtyard where more friends and family had gathered to see them off.

Their honeymoon would take them to Polesden Lacey in Surrey as well as Elizabeth’s beloved Glamis Castle. Those heady days were seen then as a precursor to a life of royal duty that would slowly change as the focus of the family fell on the Prince of Wales. However, history tells a different story. Bertie’s elder brother was still unmarried when he became King Edward VIII and within a year, he had famously given up his throne to wed. Suddenly and unexpectedly, the Duke and Duchess of York were transformed into King George VI and Queen Elizabeth. Those dramatic days also transformed their marriage from a footnote in history to a very royal wedding day indeed.

This historic royal wedding is one of dozens features in our new anthology. You can buy Royal Weddings: A Collection from Royal Central on Amazon in both ebook and paperback.