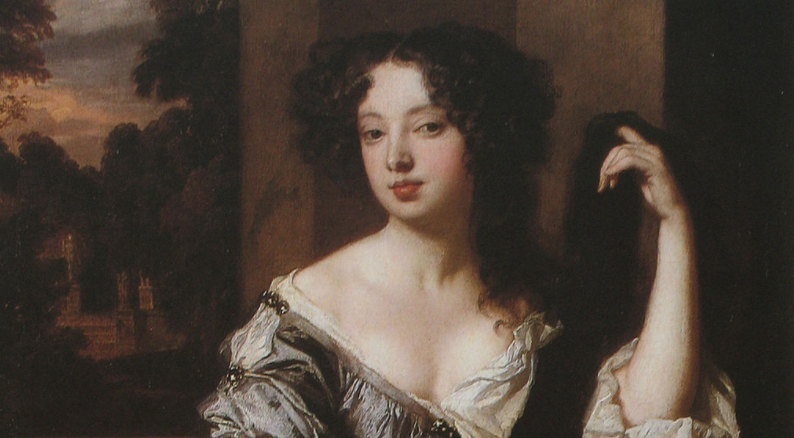 Louise Renée de Penancoët de Kéroualle, Duchess of Portsmouth was born 5 September 1649 and is the daughter of Guillaume de Penancoët, Seigneur de Kéroualle and Marie de Ploeuc de Timeur. Nobles in Brittany, France, the family name is derived from an heriess whom an ancester François de Penhoët married in 1330.

Louise was introduced early to the household of Henrietta Anne Stuart, Duchess of Orléans, sister of Charles II of Great Britain, and sister-in-law of Louis XIV of France, Louis de Rouvroy, Duke of Saint-Simon. In 1670, Louise accompanied Henrietta on a visit to Charles II at Dover. With Henrietta dying suddenly, Louise was unprovided for, but Charles II still appointed her as a lady-in-waiting to his own queen, Catherine of Braganza. It’s believed Louise was selected by the French court to fascinate Charles, although there is no evidence for this claim.

Over time, Louise established a stronghold on Charles’s affections and character. So much so, her son Charles was created Duke of Richmond in 1675. With Charles’s support, it was the understanding Louise would serve the interests of her native sovereign. The bargain was confirmed by gifts and honours from Louis XIV. Much disliked by the people of England, Louis gave her a pair of earrings worth £18,000. It was also more lavish than anything he had ever given Charles’s queen. In 1673, she was given the titles of Baroness Petersfield, Countess of Fareham, and Duchess of Portsmouth for life. Her pensions and allowances would also be enormous. In 1681, she received £136,000 alone.

In February 1685, Louise assisted in measures ensuring Charles was received into the Catholic Church on his deathbed. After his death, Louise quickly fell from favour and retired to France. Her pensions and grants on the Irish revenue given to her by Charles II were either lost in the reign of James II or at the Revolution of 1688. Louise died in Paris at the age of 85 in 1734.