Queen Margrethe’s Golden Tiaras: the Poppies and the Naasut 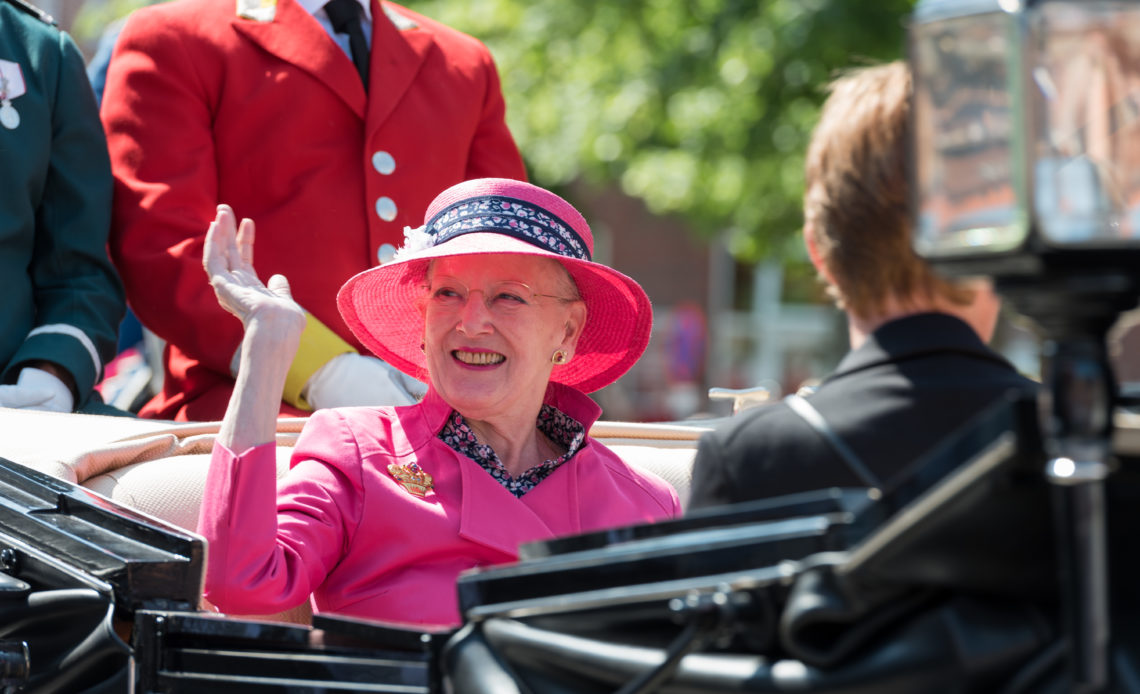 Queen Margrethe II of Denmark may be the most paradoxical personality of today’s European royals. At formal events—balls, banquets, galas and dinners—she is always dressed in lavish, elaborate dresses that mimic 19th-century ballgowns, and wears her stunning jewellery. On the other hand, at less formal occasions, Queen Margrethe and the other Danish royals are much more relaxed than their British or Spanish counterparts. Queen Margrethe is also known as a chronic smoker, though in recent years she has stopped showing this side in public.

The official events of the Danish Royal Court are steeped in an atmosphere of reverence, yet this reverence manages, somehow, to avoid stuffiness: red-liveried footmen open the Palace’s heavy doors; the Queen, who is usually seated due to hip problems, welcomes her guests in the main hall, the guests begin to arrive and, after greeting the Queen, they find their way into the banquet hall. The trumpets announce the Queen’s arrival, and the royal procession begins in the reverse pecking order: first, Prince Joachim and Princess Marie, then, Crown Prince Frederik and Crown Princess Mary, and, finally, Her Majesty the Queen.

The Golden Poppies Tiara is testimony to the Queen’s inventiveness and modern spirit: created at the Queen’s order in 1976 by Arje Griegst, this headdress looks more like a wreath than a tiara. A small comb is attached at the back of the head, from which hang tiny golden leaves. Attached to the comb are snake-like, golden threads that are hidden in Her Majesty’s hair and which extend atop her head in all directions. Each thread ends with a golden poppy, and inside each flower are diamonds and pearls representing the stamens and pistils—a total of eight detachable poppies, though the Queen sometimes wears only a few of them. The poppies visibly stand out in the Queen’s hair—an impressive creation that has been no doubt crafted with her input, given the fact that Her Majesty happens to be a costume designer.

But the most impressive golden headpiece of Queen Margrethe is the Naasut Tiara made by Nicolai Appel from melted-down gold coins—a gift from Greenland on the occasion of Her Majesty’s Ruby Jubilee in 2012. The tiara features golden poppies, leaves and bejewelled daisies (the Queen’s nickname is Daisy, the English translation of the French “marguerite”). Striking as it is, though, this tiara is not particularly loved by royal watchers. There is something off-putting by all that intense splash of gold, which just doesn’t go well with many things.

Still, if one had to wear such a tiara, my inner fashionista tells me that it should be worn with a black, or a navy dress. Indeed, Queen Margrethe was seen sporting said tiara at the New Year’s Banquet on January 1, 2013, at Amalienborg Palace, when she was clothed in a fashionable navy dress. Her most recent appearance with the Naasut was on May 26, 2018, at the reception for Crown Prince Frederik’s 50th birthday, when she wore it with a spectacular pink gown. Alas, the tiara’s gold and the gown’s pink clashed.

Fashion aside, Queen Margrethe is a royal with a mind of her own. A few weeks into the Covid-19 pandemic, she gave a speech in which she admonished (some of) her subjects for continuing to hold parties and to gather in groups. She didn’t mince her words and called them “inconsiderate.”