Ninety years of Grace: the romance with Rainier 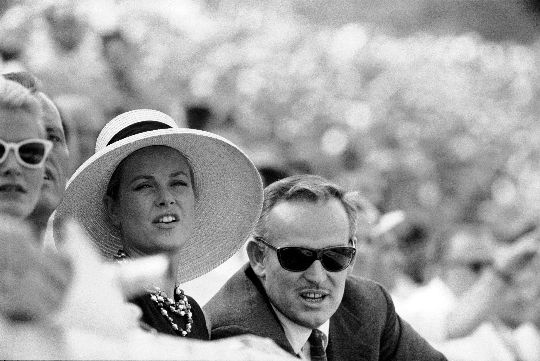 Having wrapped up filming To Catch a Thief, Grace Kelly, travelled back to the South of France to promote the movie and attend the Cannes Film Festival.

As part of her promotional duties, the French magazine, Paris Match arranged for the ‘Queen of Hollywood’ to meet a real-life prince charming, Rainier III.

The day of the shoot did not go off to a great start. A power outage at her hotel meant that Grace was unable to blow dry and style her hair, or iron any of her outfits.

Grace was forced to pull her hair back in a simple coiffure style, which she decorated with a small floral headpiece.

Searching through her luggage, Grace could find only one outfit which wasn’t wrinkled. A floral silk taffeta dress, Grace was said to not be a fan of due to its ‘fussy cut.’

With a square neckline and bold floral pattern, the dress may have look Dior inspired, but was far from designer.

It was an ‘easy to sew’ dress from a McCall pattern, which Grace had modelled on the cover of McCall’s spring pattern book in 1955.

Arriving at the palace a bit early, Grace posed for photographer Edward Quinn by herself in various locations including the throne room before being joined by the Prince.

Once Rainier joined her, he took Grace on a tour of the state apartments, the museum and the Prince’s private zoo.

Quinn would later recall the meeting. “Grace Kelly giving the Prince that kind of very discreet American bow, bending her knee, and they shook hands.

“When Grace left, [she] said to everybody, ‘He is a very charming man,’ and that was the end of it for the time being.”

While Grace may have thought Rainier was charming, she was dating French actor Jean-Pierre Aumont at the time. However, the Prince was said to be ‘besotted’ with her beauty, refinement and poise.

After the meeting, they continued corresponding through letters and phone calls, while Rainier’s priest Father Tucker, played matchmaker. Writing to Grace he encouraged the blossoming relationship, thanking her “for showing the prince what an American Catholic girl can be and for the deep impression this has left on him.”

At the end of the year, Prince Rainier would meet Grace’s family at their home in Philadelphia, and he would ask her father, Jack Kelly, for her hand in marriage.

Grace, on the cusp of becoming a princess, was about to take on the most important role of her life.