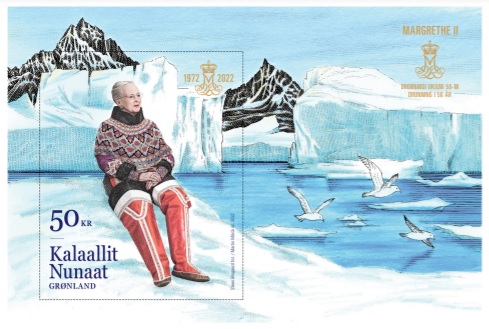 With Queen Margarethe’s golden jubilee fast approaching, institutions are revealing more of their plans to celebrate the occasion.

On the 11th of January, 3 days before 50th anniversary of the day in which King Frederik IX passed away leaving the throne in his eldest daughter’s hands, Greenland and the Faroe Islands unveiled the stamps they will issue to commemorate the occasion.

In Greenland, the stamp will feature Queen Margarethe dressed in her national Greenlandic costume posing in a fjord of icebergs and will be issued by the Greenlandic self-governing telecommunications company Tusass.

In the Faroe Islands, Her Majesty will appear with the Faroese national costume, posing in front of the ruins of Magnus Cathedral, in the village of Kirkjubøur, located on the island of Streymoy. The stamp will be issued by Faroese postal service Posta.

Both stamps are the results of 10 months of work, which began in March of 2021, when photographer Steen Brogaard snapped the Queen in the national costumes in the Dome Hall at Fredensborg Castle. Following the selection of the favourite pictures from the session, illustrator and engraver Martin Mörck went to work creating the various iterations of the stamps, including the final step of carving them in steel in a 1:1 ration to fit the printing standards of the two offices.

Like the commemorative coin produced by the Danish Royal Mint, the stamps will also be available for purchase starting on the 14th of January, and will be sold in “mini-sheets”.

This is not the first time the Queen has appeared on commemorative stamps. It is a common practice to issue such commemorative memorabilia for special occasions, such as milestone birthdays, jubilees, births or christening, and other members of the Danish Royal Family have been featured on such releases in the past.