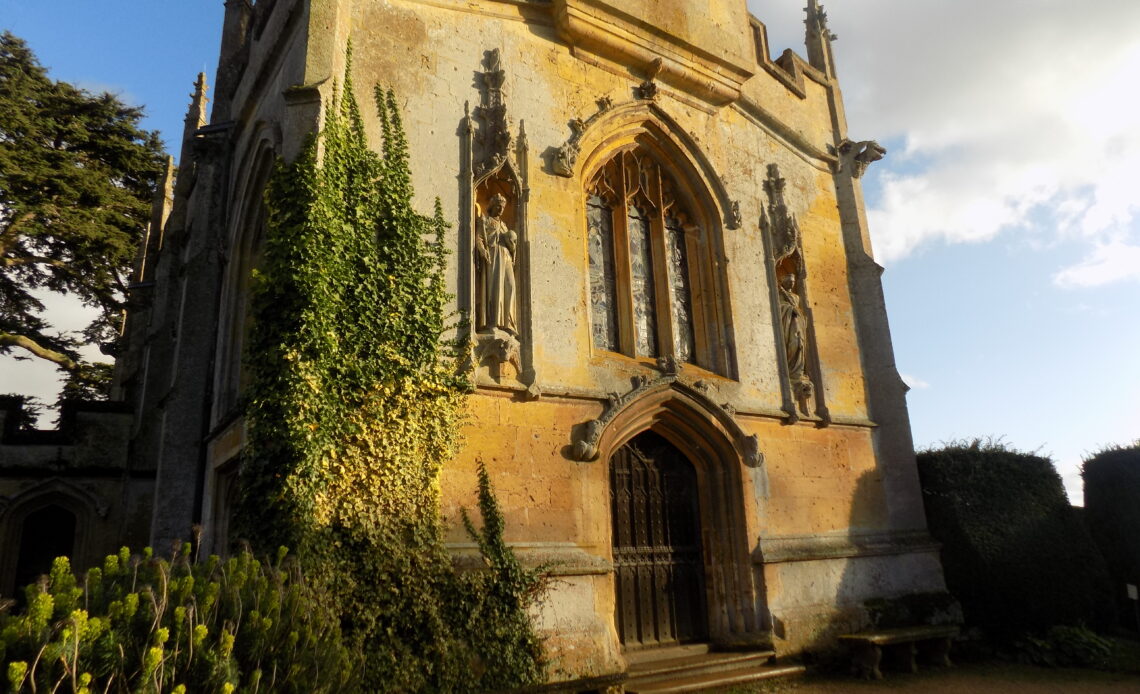 Within the walls of one of England’s most picturesque castles, a queen gave birth to her only child and set in motion a chain of events that would become one of Tudor England’s most intriguing mysteries.  The birth had been much anticipated and much talked about.  The baby, a little girl, was immediately taken off to a nursery decked in scarlet and gold where a string of attendants awaited her every demand.  And yet within days, this child’s life was turned upside down and just a few months afterwards her whole future was called into question.  For later historians, her very existence has led to endless speculation and now only scraps of evidence remain to tell the story of Mary, the queen’s daughter.

Mary Seymour was the only child of Katherine Parr – Henry VIII’s last wife. She was born at Sudeley Castle in Gloucestershire after a long labour which ended a pregnancy that had come as a great surprise to her parents. For by the time the king died in 1547, Mary’s mother had been married three times for a total of almost twenty years without ever having had a baby. But just months after her fourth wedding, that same year, to Thomas Seymour, she became pregnant for the first and only time.

The news was as welcome as it was surprising.  Katherine had been stepmother to the families of two husbands and their children were all genuinely fond of her. But her first adopted family, the Latimers, were now grown up themselves while her second brood, the royal children of Henry VIII, were apart from her for different reasons. Baby Mary would be the start of a new era in Katherine’s life.

Mary’s father was Thomas Seymour, Baron Sudeley, whose secret marriage to Katherine just months after the death of Henry VIII had caused shockwaves at the Tudor court. Thomas was the brother of Jane Seymour, Henry VIII’s third wife and the queen who provided the longed for Tudor heir who was now reigning as Edward VI. Thomas and Jane’s brother, Edward, served as Lord Protector running the boy king’s government. Thomas wasn’t happy about this and wrote to Katherine, in the summer of 1548, that their child will ‘revenge such wrongs as neither you or I can’.  Thomas and Katherine felt they should have a say in the government of Edward VI but they had been effectively sidelined by those in power.  The first mystery of Mary’s life is whether both her parents really thought their child could help unpick the power of Edward Seymour or whether this line, just one in a long letter, is more indicative of the headstrong Thomas’ attitude to life – speak first and worry later.

The arrival of a girl stemmed those ambitions to a certain extent but Thomas seems to have been overjoyed at Mary’s birth, writing to his brother about the prettiness of his daughter. The baby was named in honour of Katherine’s eldest royal stepchild, Mary, daughter of Catherine of Aragon and on her birth she became one of the most eligible women in England.  Her mother may not have been born of royal blood but she was a queen.The boy king, Edward VI, had long called Katherine his mother while the dowager queen was also held in great respect by the people most likely to succeed him on the throne – Henry VIII’s daughters, Mary and Elizabeth.  Mary Seymour was connected to some of the most important people in England and beyond.  She looked set to grow up as a queen’s daughter, enjoying wealth and privilege and with a future filled with opportunity ahead of her.

In less than forty eight hours, everything changed. For while Katherine seemed well, if tired, after the birth she soon began to show symptoms of puerperal – or childbed – fever. Katherine had employed the best medical team she could find including her trusted doctor, Robert Huicke, but there was nothing any of them could do given the medicine of the time. Records show that Katherine railed against her husband as delirium took told, accusing him of keeping her doctor from her, but when she realized she was going to die she became calm and dictated a will in which she left everything to him.  This is another mystery in Mary’s life for the little girl wasn’t mentioned at all as Katherine distributed her worldly possessions.  She was left in the complete care of her father and if anyone realised how reckless and foolhardy Thomas Seymour could be, it was Katherine Parr.

During the five years that they knew one another, Katherine saw plenty of examples of Thomas’ rash and impetuous behaviour.  They had first met at the court of Henry VIII in early 1543 when she was a widow and he was the man every woman wanted to marry.  He was handsome, charming and uncle to the Prince of Wales while she was pretty, clever and determined to climb even higher in society after an already impressive and meteoric rise.  Almost straight away there were rumours of a relationship between Seymour and Lady Latimer, as Katherine was then, but when Henry VIII decided to marry her all that came to an end.  On Henry’s death, the couple had married with almost indecent haste but Thomas had soon caused his new wife huge problems.  The dowager queen had brought her stepdaughter, Elizabeth, to live in her household and her husband’s behaviour towards the teenager soon became inappropriate.  He flirted with her, came into her bedroom dressed only in his nightclothes and tickled and slapped her. In the end, Katherine had to send Elizabeth away and the pair would never see one another again.  Set against this backdrop, the queen’s decision is perhaps even more mysterious.

Katherine died on September 5th 1548 and was buried in the chapel of Sudeley Castle.  As was customary at the time, Thomas did not attend.  Very soon afterwards he took the queen’s daughter to London and left her with Edward Seymour.  But while this gesture might indicate brotherly affection, Thomas’ other actions of the time were anything but friendly. As Mary was raised with her Seymour cousins, her father began to plot to overthrow his brother and gain influence over Edward VI. He had always been a passionate, ambitious and headstrong man and was known to deeply resent his brother. In January 1549 he was caught trying to break into the king’s chambers, while armed with a pistol, and in the fight that followed he killed his nephew’s favourite pet dog. He was quickly accused of treason and many things, including his past indiscreet behaviour with Elizabeth, was investigated. He was executed in March 1549. Mary was now an orphan.

She was also, technically, a poor one for traitors like Thomas lost all their possessions and as her mother had bequeathed everything to her father Mary was left with nothing. Her uncle Seymour certainly didn’t want his treacherous brother’s offspring in the house and set about making arrangements for Mary’s care.  In just seven months, Mary had gone from being the queen’s daughter to the orphan of a traitor.

Katherine Brandon, Duchess of Suffolk was appointed guardian to Mary soon after the execution of Thomas Seymour. But this wasn’t the first time that this Katherine had played an important part in the affairs of Katherine Parr. For in 1546, the last of Henry’s wives found her position under threat. The king was apparently tired of her religious interests and opinions and the Duchess of Suffolk, recently widowed and about seven years younger, was reported by some at court to be in line to become wife number seven. Clever Katherine Parr talked her way out of an execution and the Duchess of Suffolk became the queen’s friend rather than queen herself.

That doesn’t mean she was happy to bring up Mary. Most of her woes were financial – Mary had nothing but as but as the daughter of a queen there was an expectation that she would be royally looked after. Katherine Brandon was soon writing to William Cecil, an important man at the court of Edward Seymour, asking for funds with which to care for baby Mary. She persisted in pressing for Mary’s estate to be made available and finally, in January 1550, her father’s lands were restored to her by an Act of Parliament but this is where the story of the queen’s daughter becomes even more mysterious.

Because no claim was ever made on that estate. Mary was entitled to use what was left of her father’s possessions and money but no one ever attempted to spend a penny of it on her behalf. And that has led many historians to conclude that the queen’s daughter must have died young. In an age where many children succumbed to illnesses, it seemed clear that Mary Seymour became poorly and probably didn’t live beyond the age of two. No record or even mention of her death is found around that time which might be explained by the fact that although parishes were meant to keep records of all events by then, many still only managed to register a portion of the births, deaths and marriages that took place within their boundaries.  It could be that the record is lost, as so many were, in the centuries since.  Or, as some have argued, it could be that it never existed at all – those who believe Mary lived far longer point out that such an important child as the daughter of a queen would surely have merited some kind of memorial.

The Victorian writer, Agnes Strickland, believed that Mary lived to adulthood and that she married while others have speculated that the decision not to claim on Seymour’s estate (by then quite small) was to keep Mary safe by making people believe she was dead.  By the time the estate was released, the Seymour family had fallen from power – Edward was arrested in October 1549 and imprisoned in the Tower of London.  There were plenty of people who wanted to see the Seymours suffer and Mary’s position was even more precarious with her uncle in such deep trouble.  But in 2010, Linda Porter argued that a poem by John Parkhurst, published in 1573, probably takes Mary as its subject. The verse is an epitaph for a child who died young and who had a ‘queenly mother’.  Whatever the reason, Mary disappears mysteriously in 1550 and is never officially heard of again.  Her fate remains unknown.

The only thing we really know about Mary is that she was the daughter of a queen. It is easy to speculate that had her mother been able to provide some counter to the chaotic influence of Thomas Seymour, Mary’s life might have turned out very differently or that had she emerged as an adult at the court of one of the later Tudor monarchs she might have played a great part in the dramas that unfolded.  Her disappearance from the records only deepens the intrigue around her. Mary Seymour was born to a glittering life but sank into the shadows almost immediately. She is a real royal mystery.