‘My dear Grandmama’: Queen Victoria’s memories of her grandmother 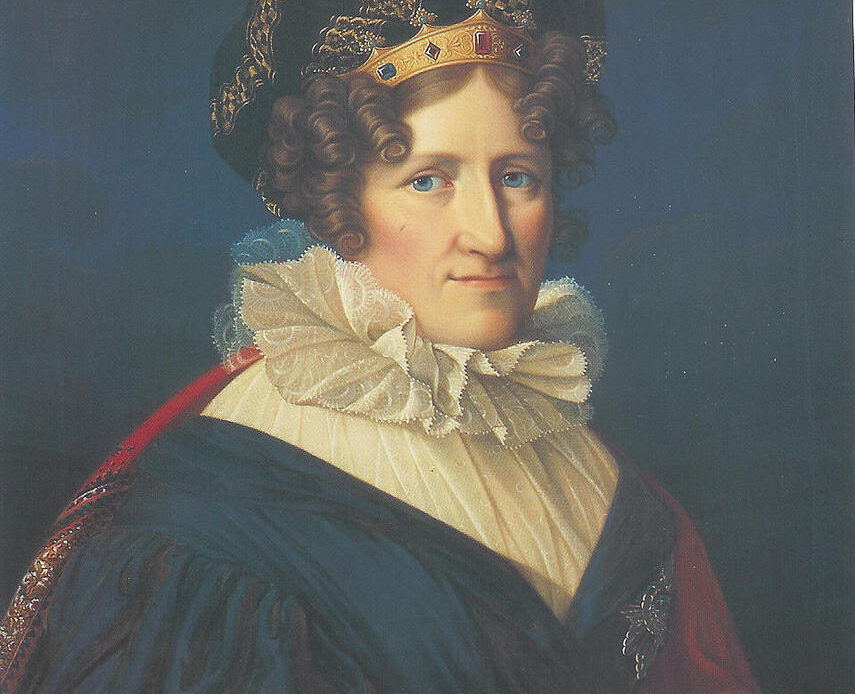 Who was Augusta Caroline Sophia, Dowager Duchess of Saxe-Coburg-Saalfeld?

Born a Princess of Reuss Ebersdorf (1757-1831), she was Queen Victoria’s ‘dear Grandmother’. In 1872, Queen Victoria wrote down a short memoir which survives at Windsor, which was reprinted in the three volumes of Queen Victoria’s published letters, edited by A. C. Benson and Lord Esher (1908). We do not know what moved Queen Victoria to write down her reminiscences, for she never again resumed the exercise – possibly for lack of time and perhaps unsurprising for one whom the author Giles St Aubyn once estimated in a 1972 lecture to the Royal Society of Literature as having written some 2,500 words a day as an adult – not to mention the Journal she kept from the age of thirteen until the end of her life. She wrote it in 1872, by which time she had become a grandmother many times over – the future Tsarina of Russia, Alexandra Feodorovna, was born that June in Darmstadt, as the child of her second daughter, Princess Alice and her husband, Prince Ludwig (‘Louis’) of Hesse. It is just possible that Queen Victoria’s establishing herself in family terms as the indisputable ‘Grandmother of Europe’, inspired her one day to write down her family memories. These included her treasured recollections of her own (maternal) grandmother, the Dowager Duchess.

In a letter to Queen Victoria in 1843, her beloved half-sister Princess Feodore wrote: ‘I was much amused in your last letter at your tracing the quickness [own italics] of our tempers in the female line up to Grandmamma [Dowager Duchess Augusta Caroline Sophia], but I must own that you are quite right!’

The Dowager Duchess had been painted as a young woman by Johann Heinrich Tischbein the Elder, in a commission for her father, Heinrich XXIV Count of Reuss-Ebersdorf. This graceful picture depicts the young Countess in a typically classical pose as the widowed Artemisia, but more unusually, this was painted in order to attract interest from first-time, potential suitors. Artemisia was the classical widow, lamenting her dead husband Mausolus, and it is extraordinary as the author A. N. Wilson has pointed out, if we consider the dreadful grief of Queen Victoria for Prince Albert, to think of this picture of her ‘dear Grandmother’, painted years before she made widowhood a cult of her own (A. N. Wilson, Victoria: A Life, p. 20, Atlantic Books, 2014).

Queen Victoria had fond memories of her German grandmother, which she wrote down in this short memoir. Whilst this memoir was written down much later, it tells us much information and most importantly, how Queen Victoria saw her own childhood. The Dowager Duchess of Saxe-Coburg-Saalfeld died the year before Victoria began her celebrated Journal. We have, therefore, no journal references to her in life, as written by a thirteen-year-old. Instead, we have the recollections of a Queen in her fifty-third year.

The Dowager Duchess features as a portrait in the Family Hall at Schloss Ehrenburg in Coburg, a room which perhaps like no other, best conveys a sense in art, of Queen Victoria and Prince Albert’s shared genealogy. The Dowager Duchess was the grandmother (maternal) of Queen Victoria and the grandmother (paternal) of Prince Albert. As Countess of Ebersdorf, she married in 1777 Franz Frederick Anton, Duke of Saxe-Coburg-Saalfeld. Together, they had ten children.

Queen Victoria wrote vividly of her ‘dear Grandmother’ visiting Claremont ‘in 1826 (I think)’. Her mother, the Duchess of Kent and half-sister, Princess Feodore travelled part of the way to greet her: ‘I recollect the excitement and anxiety I was in, at this event, – going down the great flight of steps to meet her when she got out of the carriage, and hearing her say, when she sat down in her room, and fixed her fine clear blue eyes on the little grand-daughter whom she called in her letters ‘the flower of May’ [Queen Victoria was born on 24 May 1819], ‘Ein schönes Kind’ – ‘a fine child’.

It was the Dowager Duchess who wrote to her daughter, the Duchess of Kent on the birth of Victoria: ‘My God, how glad I am to hear of you… I cannot find words to express my delight that everything went so smoothly… I cannot write much… dear mouse… for I am much too happy’. She wrote with prescience on the royal baby’s gender: ‘The English like Queens’ (cit., Christopher Hibbert, Queen Victoria: A Personal History, p. 12, HarperCollins, 2000).

One senses the pride and importance for Queen Victoria in these remembered details, as she wrote them down, mingled with feelings of regret that she was too young to enjoy the experience: ‘She was a good deal bent and walked with a stick, and frequently with her hands on her back. She took long drives in an open carriage and I was frequently sent out with her, which I am sorry to confess I did not like, as, like most children of that age, I preferred running about…’

We know that this was at Claremont, the house at Esher of her beloved uncle, Prince Leopold of Saxe-Coburg, future King of the Belgians: ‘Claremont remains as the brightest epoch of my otherwise rather melancholy childhood – where to be under the roof of that beloved Uncle…’ Princess Feodora also wrote of her love of Claremont in a letter to Queen Victoria, where recalling their shared childhood, she admitted: ‘Claremont is a dear quiet place; to me also the recollection of the few pleasant days I spent during my youth. I always left Claremont with tears for Kensington Palace…’

Queen Victoria continued: ‘She was excessively kind to children, but could not bear naughty ones – and I shall never forget her coming into the room when I had been crying and naughty at my lessons – from the next room but one, where she had been with Mamma [the Duchess of Kent]– and scolding me severely, which had a very salutary effect…’ We have a wonderful private memory of these lessons elsewhere within the memoir: ‘At Claremont, and in the small houses at the bathing-places, [Tunbridge Wells, etc] I sat and took my lessons in my Governess’s bedroom. I was not fond of learning as a little child – and baffled every attempt to teach me my letters up to 5 years old – when I consented to learn them by their being written down before me’.

Much later, visiting Schönberg near Bensheim in Germany, Queen Victoria was quick to record that ‘Here, my great Grandmother, Princess Caroline of Erbach, who married Prince Reuss Ebersdorf, was born.’ She added proudly in her Journal from Darmstadt on 29 April 1885: ‘She was the mother of my dear Grandmama of Coburg-Saalfeld’ (cit., HRH The Duchess of York and Benita Stoney, Travels with Queen Victoria, p.177, Weidenfeld & Nicolson, 1993).

In the grounds, Queen Victoria planted a tree, affectionately known in German as the ‘Viktoria Linde’ [Victoria Lime]. The plaque on the tree is touching, though inaccurate. It reads: ‘Victoria Lime: This lime tree was planted by Her Majesty Queen Victoria of England on the occasion of her visit to the Schloss 1887 to honour her great-grandfather Count George Auguste of Erbach- Schönberg, the founder of this park’ (cit., Ibid, p. 179).

Count George Auguste was the Queen’s great-great-grandfather and we also know from the reminiscences of Marie of Battenberg, Princess zu Erbach-Schönberg that the Queen visited in 1885, not 1887. Princess Marie was deeply attached to Queen Victoria and the two women shared a warm friendship. Indeed, the Princess’s own memoirs recall her own visits to Queen Victoria between the years 1885 and 1898, visits she considered to rank amongst the most enjoyable of her life. Princess Marie wrote down touching details about the Queen, including her particular habit of drinking tea and coffee by pouring it into several cups; her preferred drink at the dining table when eating was seltzer-water with a dash of whisky (Princess Marie zu Erbach-Schönberg, Reminiscences, pp. 236-7, London: George Allen & Unwin Ltd, Royalty Digest Reprint, 1996). The Princess confirmed that the Queen planted the lime tree in the garden during her visit to Schönberg in 1885, although she too repeated that Count George Augustus was the Queen’s great-grandfather (Ibid, p. 216).

The Dowager Duchess died at Coburg on 16 November 1831 and was buried in the Ducal Mausoleum at Coburg. Queen Victoria concluded her unique recollections of this German grandmother, whose memory she later cherished: ‘In November (I think, or it may have been at the end of October) she left, taking my sister [Princess Feodore] with her back to Coburg…’

Over a dozen images of the Dowager Duchess survive in the Royal Collection, including a beautiful miniature attributed to Frederic Jacob Hill, of which a pencil drawing exists in the Residenzschloss in Darmstadt, first acquired for the Royal Collection during Queen Victoria’s reign. Another miniature, attributed to W. Schmidt, was engraved ‘The late / Duchess of / Saxe Coburg / 1830’. This probably relates to a gift given to Princess Victoria, possibly in the year of the Duchess’s death. The artist Sebastian Eckardt painted her wearing a lavish white bonnet in 1831, her house near Coburg in the background.

An oil painting (copy) of the Duchess by Herbert Luther Smith, perhaps commissioned by Queen Victoria, hangs in the Arcade Corridor at Osborne House. An elegant painting of the Duchess wearing a black dress and veil was executed by William Corden the Younger for Queen Victoria in 1844. A miniature version of this by John Simpson was given by Queen Victoria to Prince Albert as a gift, possibly for Christmas 1848. It was engraved: ‘Augusta Dowager / Duchess of Saxe Coburg / Saalfeld Died Novr 16, 1831. / Simpson 1848’. In 1857, Queen Victoria’s aunt Princess Mary, Duchess of Gloucester [last surviving daughter of George III] bequeathed her a miniature of the Dowager Duchess on ivory, in 1857.