Looking for a Queen of England in Peterborough 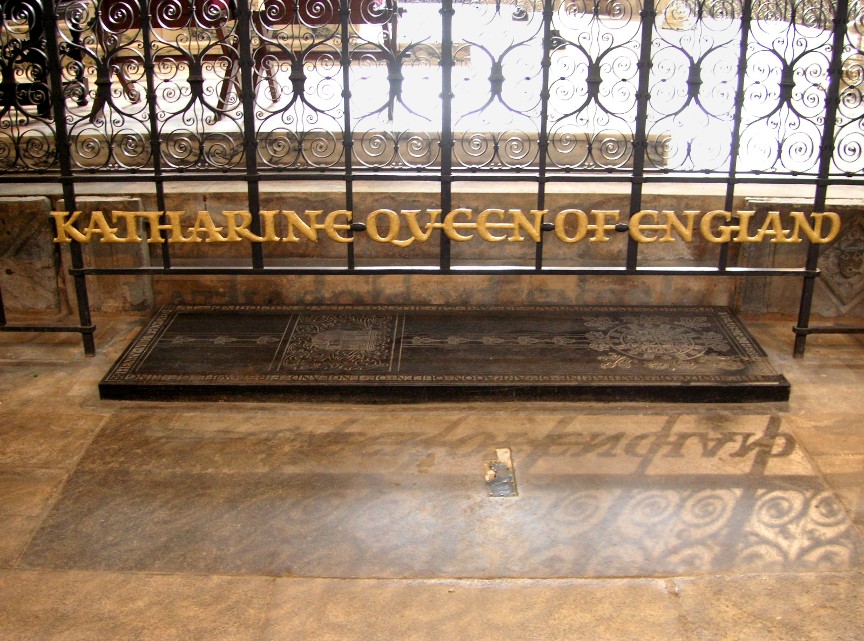 Looking for the grave of Henry VIII’s first wife, Catherine of Aragon in Peterborough, is an experience both moving and affecting and remains a special reason why many choose to visit the Cathedral today. Peterborough Cathedral hosts an annual festival devoted to Catherine’s memory, usually held at the end January, to commemorate the fact that Catherine of Aragon was buried at the Cathedral on 29 January 1536. The festival normally takes place over two days and includes a special memorial service to the Queen’s memory. During this service, there is a ceremony with the laying of a wreath, featuring representatives from the Spanish Embassy.

Catherine of Aragon’s grave is rarely to be seen without flowers or pomegranates – her chosen symbol – and in her case, a painfully chosen one, because the pomegranate has always denoted fertility. Specimens of this fruit are left respectfully on her tomb in Peterborough, all year round. In purely etymological terms, the name derives from the medieval Latin for a seeded apple, and in old English the fruit was given the byname of the “apple of Grenada”, confusing a misspelling of the Spanish city with what was meant to simply describe that which contained many seeds. Whilst her ability – at least in the early years of her marriage to Henry VIII – to conceive was in keeping with the rich fruitfulness of this symbol, the only surviving child of their union was to be that of a later pregnancy, resulting in a daughter, the Princess Mary.

Catherine of Aragon died at nearby Kimbolton Castle in Northamptonshire – some twenty miles from Peterborough – on 7 January 1536. Her body was laid in the chapel at Kimbolton whilst it awaited burial and it was transported from here to the Cathedral about three weeks after her death, stopping at Sawtrey Abbey for one night en route. This procession was recreated in 1986 to mark the four hundredth and fiftieth anniversary of her death. The burial procession was however, part of the final insult in death, as the ceremonial honour accorded to her was consistent with the passing of the wife of Henry VIII’s elder brother Arthur, Prince of Wales, to whom she had been first married. Following the King’s so-called “Great Matter” in securing the royal divorce, Catherine had stubbornly refused to deny the fact that her marriage to the King in 1509 had been valid, insisting that her marriage to Prince Arthur had never been consummated.

This rigidity on Catherine’s part led to Henry’s deliberate banishment of her and his determined insistence that she be referred to as “Princess Dowager”, a title that Catherine herself refused to acknowledge. This also meant that the King would not allow Catherine to see her beloved daughter, the Princess Mary, now styled “the Lady Mary”, in the hope that this would contribute to her will being broken and ultimately force her to comply. As Prince Arthur’s widow, Catherine had been correctly addressed as Dowager Princess of Wales some thirty years before but it was by this title that she was now to be formerly known after the King’s marriage to Anne Boleyn. Unsurprisingly, Henry VIII did not attend the funeral.

Nor did the sympathetic Eustace Chapuys, the Imperial Ambassador, who noted that she had not been buried in the manner that befitted a queen. Henry VIII chose Peterborough Cathedral as the place where Catherine of Aragon would be buried and not St. Paul’s Cathedral, where she had in fact married Prince Arthur in 1501. It was as if even in death, the King was attempting to force Catherine to acknowledge – in heraldic terms – the only title that he himself would recognise. For the coat of arms above her grave in the Cathedral was that of Wales with Spain.

It was the wish of Mary I, that her mother’s body be removed from Peterborough Cathedral and transferred to Westminster Abbey when she herself died, so that they might lie in rest together. Perhaps a sense of atoning for the years when they had been forced to be apart, one feels that this wish was a deeply held one. Instead, as in so many of these final requests, quite the reverse happened. The ill-fated Mary, Queen of Scots was interred for a time in Peterborough Cathedral, after her execution in nearby Fotheringhay Castle in 1586. And it was the body of Mary, Queen of Scots that was removed at the wish of James I to Westminster Abbey with a tomb of her own and Mary I whose mortal remains would lie alongside those of Elizabeth I, as the respective daughters Catherine of Aragon and Anne Boleyn.

And so, Catherine of Aragon stayed where she was – at Peterborough. The present tomb of Catherine of Aragon was restored and altered following the wide-scale Victorian renovation of the Cathedral. The arms above Catherine’s tomb – close to the Cathedral’s sanctuary – are those of a Queen consort of England, quartered with those of a Spanish infanta. These were placed here at the wish of Queen Mary, consort of George V. It is pleasing to note the words above her grave as “Katharine, Queen of England” as she had wished.

Then there is the spelling. Catherine would have been christened after the Spanish “Catalina” and Catherine herself signed herself using a “K” in various forms; during the years of her marriage to Henry, it was the initials “H” and “K” were featured intertwined.

It is pleasing to note that Peterborough is – most appropriately for Catherine – twinned with Alcala de Henares, the place of her birth.  Also, a statue of Catherine has been erected at Alcala de Henares, showing her as a young woman, with a rose and a book in her hand.