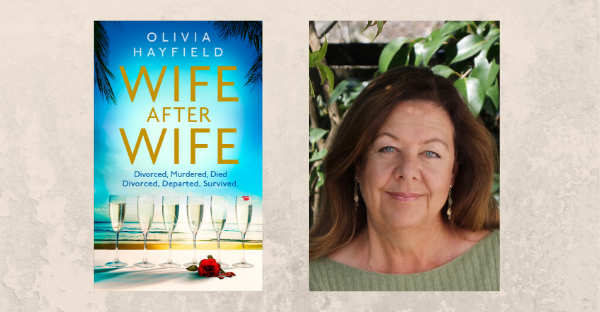 Pull Henry VIII out of the Tudor era and make him a media king in modern-day London and you’ve got the premise of Olivia Hayfield’s new novel, Wife After Wife. Spanning from 1980s London to the present day, the book tells the story of Harry Rose, head of the Rose Corporation (think Virgin) and his many unfortunate relationships.

Hayfield, who said she pondered how a man like Henry would fare during the #MeToo movement, took the time to chat with Royal Central about her lifelong love for the Tudors, favourite wives, and the intriguing sequel to Wife After Wife.

Kristin Contino: Have you always been interested in the Tudors? What made you decide to take Henry VIII and his wives and give their story a modern twist?

Olivia Hayfield: I grew up in Warwickshire, close to several Tudor and Elizabethan hotspots – castles and stately homes. My parents would take us to them on Sunday outings, and Henry was always there on the walls, and in the gift shops, there’d be Tudor tea towels, Six Wives coasters, Henry mugs – those colossal shoulders, that mean little mouth. There was no escaping the man. Then I went on a school trip to see Anne of the Thousand Days. I was outraged! How could a man order the beheading of a woman he’d loved that much? He knew those charges were lies. But I was hooked. As a teen, I read every historical novel about the Tudors in my local library, and I’m still a Tudor junkie.

Then, at the height of the #MeToo movement, I was pondering on the actions of a certain gingery, powerful man who was in the news for firing people and replacing them with yes men, and who had a bad attitude to women. He’s just like a modern-day Henry VIII, I thought. Closely followed by, But is he? What would Henry be like if he lived today? I saw my opportunity – I could reincarnate Henry, pitch him against modern-day versions of his wives, and give him his comeuppance! And off I went. The story more or less wrote itself.

What kind of research did you do for the book? Was there anything that you struggled with modernising?

My knowledge of Henry was mostly based on historical novels, so I read more authoritative texts, notably Antonia Fraser’s The Six Wives of Henry VIII. It wasn’t really a struggle to modernise the characters – they were all so strong, so vivid, it was easy to picture how they’d be if they lived today. Trouble was, the more I learned about Henry, the more I came to … maybe not like, let’s say understand him. He really grew on me. There was a lot more depth to this character than I’d thought. And the question that came to frame my Harry Rose was, What turned Henry VIII from an intelligent, charming, deep-thinking, (hot!), athletic guy who loved music, dancing and books, into a cruel, obese tyrant? And if those influences (absolute power and health issues) were taken away, what would we be left with?

My main challenge plotwise was the two beheadings. I felt that strong, modern-day women wouldn’t put up with Henry VIII-type behaviour, so I had to give Harry’s wives a reason to stick with him, to love him. I didn’t want them only attracted to his looks, wealth and power, I wanted them to have more depth than that. This is another reason I made Harry Rose a great deal more sympathetic than Henry VIII. The reader will still loathe him at times, but I hope they’ll want to shake him by the shoulders, tell him to pull himself together – to root for him. Having Harry murder two of his wives would have turned the reader against him (obviously!), so instead I made him responsible for their deaths, which then haunt his famous conscience and cause his addictions.

As an Anne Boleyn fan, I have to say Ana stood out to me the most and I loved her style and determination. Do you have a favourite wife in the story? What about supporting characters? (Terri was my fave!)

Terri is absolutely my favourite character! I’ve carried her over into the sequel too. I had a lot of fun writing the scenes where Terri and Harry spar – gritty northern lass versus southern over-privileged white male. She’s fearless; the only one who dares stand up to him.

As for the wives, I made Ana the most intriguing, to match her Tudor counterpart. I love her to bits – frosty, but I feel I could drink a few wines with her and she’d thaw and we’d have a roaring time. My favourite wife is Clare – so wise, kind, intelligent, and she’s the only one who really understands what she’s getting into with Harry. Her historical counterpart was an incredible woman. Among many achievements, she was the first woman in England to have a book published in her own name. Henry sure knew how to pick ’em!

And then, of course, there’s Caitlyn. Catherine Howard’s story is so tragic, I get annoyed when people criticise her for her infidelity and naivety. She was only a teenager when she married Henry (he was 49), and had a terrible upbringing. These days her early relationships would be described as sexual abuse, but by the standards of the time she was ‘wanton’. And then, of course, she was thrown into Henry’s path by her ambitious relatives and abandoned when it all went horribly wrong. Her story is heartbreaking, and I hope my modern-day Caitlyn makes people sympathise with her historical counterpart a little more.

The city really is a character in itself. How do you think London plays into Harry’s character and life?

Wife After Wife is a love letter to my favourite city. I worked in London for 15 years and writing this book gave me a wonderful opportunity to relive my times there. And London is, of course, brimming with history. The street names, the pubs, the parks, the palaces, the backstreets, and the River Thames – every nook and cranny has a story to tell, and I wanted to bring this through in the writing. I can’t imagine Harry Rose anywhere else. He’s very much a product of the English public school system and of the London scene in the 1980s when the City was awash with money. He’s a cliché – a Hooray Henry – as both Ana and Bennie point out. But I worked hard to make him more than a stereotype.

Hampton Court Palace has always been so interesting to me and I loved how you included it in the book. Do you have a top Tudor location and why?

Hampton Court is one of them, for sure. It’s spectacular, and its walls ooze with history. I really enjoyed writing the launch party scene that’s set there. The Tower of London is always a fascinating place to visit; the ancient graffiti on the walls of those cold, grim rooms is so evocative, and looking out of the windows down onto Tower Green, as Lady Jane Grey, Anne Boleyn, the Dudleys – so many of them – must have done, the sound of the scaffold being constructed … it sends shivers down the spine.

On a happier note, I also love Southwark, where the fictional Rose building is sited in the book. This historical area has regenerated in recent years, with its pubs and cafes, the Globe Theatre, Borough Market, the lovely Thamesside walks. It’s probably my favourite part of London now. When I was back there last summer I met up with old friends in Southwark, under the heading ‘fact-checking’. I love research!

What can you tell us about the upcoming sequel to Wife After Wife?

Sister to Sister is told mainly from the point of view of Harry’s daughter Eliza. We pick up where Wife After Wife finished, with Eliza at university in Oxford. The plot centres round Eliza’s relationships with three people: her sister Maria, her boyfriend Rob Studley (Robert Dudley, the love of Elizabeth I’s life), and her thorn-in-the-side cousin Mac (Mary Queen of Scots). Her friends also play an important part in the plot, notably the flamboyant Will Bardington (Shakespeare) and the enigmatic Kit Marley (Christopher Marlowe). These two enfants terribles of the arts world are the creative force behind Rose Corp’s new drama-production arm, RoseGold (like a British Netflix). Harry is very much still around, and we see him continuing his journey to redemption through his relationships with Eliza and Maria. This sequel has more of a mystical feel to it, with the reincarnation theme coming through. And be warned – you may need tissues!

Is there another historical story you’d like to re-tell for modern times?

Yes indeed! Henry’s and Elizabeth’s stories were the most obvious ones to tell, as people are familiar with them and therefore they work on two levels. My challenge is to find others whose stories are well-known enough for people to ‘get’ them. Of particular interest to me are Richard III, Henry VII and the ‘Princes in the Tower’ – the whole ‘whodunnit’ angle. But I’m also tempted to revisit Mary Queen of Scots, whose story I’d like to retell in more depth. I’m at the ‘mulling’ and ‘researching’ stage of the whole ‘what next?’ question, which is a lovely place to be. Of course with the current COVID-19 situation everything has been put on hold as far as launch dates go, so we’ll just have to wait and see. I’m keeping my fingers crossed it’s a ‘when’ and not an ‘if’!

Order Wife After Wife in the UK here and United States here.