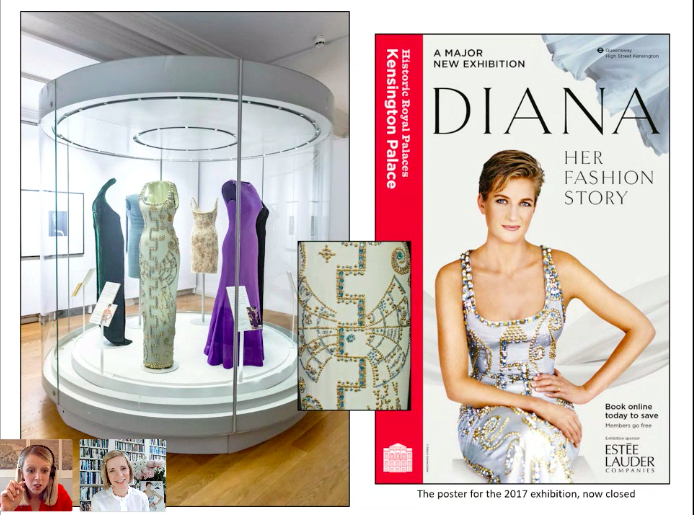 Historic Royal Palaces’ chief curator Lucy Worsley continued her series of online talks this week with a look back at Diana, Princess of Wales’s wardrobe and how she was an “influencer” before social media ever existed.

Eleri Lynn, curator for the Royal Ceremonial Dress Collection at Historic Royal Palaces, joined Worsley for the hour-long chat on July 9th 2020 on Crowdcast to discuss looking after these iconic outfits, some of which were featured in Kensington Palace’s Diana: Her Fashion Story exhibit.

Lynn touched on how people can think of fashion as frivolous but, really, clothing is an important way to get to know more about a historical person’s life.

“Diana was such a master at using clothes as a form of language, as a form of communication,” Lynn said. “She knew how to use clothes as a tool really to do her job. Whether that was sort of being an ambassador for British fashion or to champion her humanitarian causes.”

Along with some of her more famous outfits, the curators gave a peek at a new item of Diana’s clothing recently acquired by Historic Royal Palaces: a hacking jacket worn by Diana as a teenager in the 1970s. “She wasn’t born a fashion icon,” Worsley admitted as they discussed the jacket Diana would have worn for country pursuits like riding ponies. The jacket includes a sewn-on tag reading “Althorp” (the Spencer family’s estate) and Lynn shared how she found three pastel hankies in the pocket.

“Actually we know that as a teenager she had very few clothes. She had a smart pair of shoes and a shirt, and a nice dress but the rest of her clothes she borrowed from her sister and friends and things like that,” Lynn said. “She wasn’t massively into that world.”

The change in her wardrobe, of course, happened when she became engaged to Prince Charles. According to Lynn, Diana’s mother suggested she go to Bellville Sassoon in London to select some outfits, which was a typical outing for young aristocratic women.

Unfortunately, Diana had a Pretty Woman moment when the shy teenager arrived unannounced to look through the clothes and a shop assistant said, “I don’t think there’s anything for you here, perhaps you should go and look elsewhere.” Little did they know they were speaking to the future Princess of Wales. Diana went to Harrod’s instead and bought the blue suit she’d wear for her public engagement announcement (and at a later date went back to Sassoon, with rude shop assistants banned from the meeting).

On the topic of fashion misses, the curators talked about how the “complicated, overblown” outfits from the 1980s didn’t age well. “Those very seasonal fashions, they do date,” Lynn said. “So we’re looking back at it now through very different eyes.”

Another outfit considered an early miss was the “scandalous” gown by David and Elizabeth Emanuel that Diana wore to her first public outing with the Prince of Wales after their engagement announcement.

“She’d gone to their saIon and chosen this very glamorous black strapless evening gown, but it was a sample size and it was slightly too big for her so it didn’t quite fit,” Lynn said. “And also it was incredibly low cut, so when she got out of the car there was quite a lot of cleavage and the press of course, went wild.”

One of the things Diana did especially well was using her wardrobe to relate to the public. “We often think about royal dressing as very grand, and about sort of creating this sort of magnificence, particularly traditionally,” Lynn said. “But Diana also used her clothes to appear approachable to people.”

One dress, by David Sassoon, was often worn to children’s hospitals because of the “jolly” colours and pattern, along with chunky jewellery for the children to play with. Lynn shared how Diana didn’t order the hat from the original sketch because you “can’t cuddle a child in a hat.”

Once Diana and Charles separated, we saw a change in the types of designers she wore. “It was the duty of Princesses of Wales, right back into the 18th century, to wear British to showcase British fashion, and that’s something that Diana was obviously doing,” Worsley said. “After her separation, she didn’t quite have to toe that line so much anymore, did she? And she began to flirt with these dangerous continental designers.”

Covering the 1997 Christie’s auction of Diana’s dresses, the curators revealed that this was how Historic Royal Palaces obtained the bulk of the pieces included in the Diana: Her Fashion Story exhibit.

The auction, which was originally Prince William’s suggestion, included 79 dresses and raised £3.5 million for AIDS and cancer charities.

“It was widely reported at the time in the press that this was Diana closing a chapter on her royal life and moving on to a new chapter,” Lynn said.

Entering this period of her life, Diana’s fashion choices were able to relax a bit when not focused on her executive suits and workwear. Lynn said that Diana’s clothing was often about “giving the press very little to write about in terms of her fashion choices” and focusing more on being a working woman with a job to do.

Wrapping up the discussion, the curators answered viewers’ questions and one of them was about future exhibitions. Royal fashion fans are in luck, as Lynn said they would “undoubtedly” put on another exhibit of Diana’s clothes in the future.

As for acquiring new pieces in the Royal Ceremonial Dress Collection, “Anything worn by Diana of course is important in telling her story,” Lynn said. “She’s an important person in the history of our palaces so we would certainly collect anything worn by her, probably.”