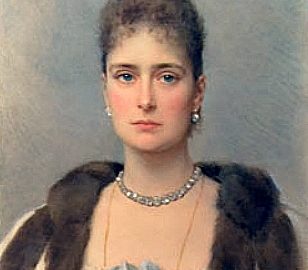 “She was a rare flower, too delicate for this world, but rejoicing others with her fragrance and cheering them on the way…”

With these words, Tsarina Alexandra Feodorovna of Russia described the death of her friend, Julia, Countess Rantzau in a letter of 1901 to Princess Marie Bariatinsky, who had become her lady-in-waiting in 1896 and who became a friend in her own right, after the completion of her duties in 1898. Alongside the female friendships that she was able to form in Russia, Alexandra retained a close attachment to the friends of her youth in Darmstadt, maintaining contact with those who were dearest to her, such as her former English governess, Miss Margaret ‘Madgie’ Hardcastle Jackson, “Pollie’ Delme-Radcliffe, Toni Becker-Bracht and Magarete, Baroness ‘Gretchen’ von Fabrice.

Alexandra’s nature was a shy one, as she admitted in words, that alone betray how difficult the magnificently public role of Tsarina would have been for her particular character, in contrast to her mother-in-law, Maria Feodorovna’s glittering personality: “I am not made to shine before an assembly – I have not got the easy nor the witty talk one needs for that…” (23.11.1905) Alexandra was able to form deep friendships with those to whom she became attached; hers was a character both introspective and fiercely loyal, writing again to Princess Bariatinsky in 1905: “I must have a person to myself if I want to be my real self… I like the internal being and that attracts me with great force…” Her female friends were of immense importance to her and the letters that she wrote to them reveal the closest interest in their sorrows, joys and circumstances, even employing a secret code which enabled her to entrust her own private feelings to paper, without fear of interception.

Occasionally the letters have a quasi-maternal ring, where she begs her friends to take proper care of their health, expressing extreme anxiety – other letters, especially those before the birth of the Tsarevich Alexei Nikolaevich in 1904, are simply from one mother to another, describing the arrival of a first tooth or exchanging photographs of a newborn child. Some of these friendships are better documented than others, in the form of surviving letters, telegrams, postcards and personal gifts, some still preserved by the descendants of their recipients, others in museums. Others are harder to trace, even in the archives. One of these is Alexandra’s friendship with Countess Julia Rantzau (1864-1901).

Julia Rantzau was born in 1864, two years after the marriage of Alexandra’s parents – Prince Louis of Hesse and Princess Alice of Great Britain and Ireland, Queen Victoria’s second daughter – at Osborne House in 1862. Julia’s birth date is possibly significant for the friendship – she shared Alexandra’s own birthday of 6th June – Alexandra being born in 1872, making her Julia’s junior by eight years. The Rantzau (Ranzow) family were of North German nobility and had lived in the region of Schleswig-Holstein for at least three centuries – Rantzau is the name of a Schleswig-Holstein municipality, with the near-lying Schloss Rantzau near Rantzau bearing a date on its outer wall for 1593.

The Rantzau family belonged to those ancient noble families of Holstein, known as the equites originarii. Julia’s father Emil, Count von Rantzau enjoyed a career as a politician in Schleswig-Holstein and was himself born close to Copenhagen, at Lyngby in 1827. He married his cousin, Caroline Christiane Elisabeth geb. Reventlow (1837–1917) and the couple had eleven children. The future Tsar Nicholas II joked to Alexandra in the period during their engagement of the honeymoon that they would in fact never enjoy, due to the unexpected death of Tsar Alexander III; he suggested they should travel incognito: “When we are once married and start on a voyage, to Italy for instance (Venice, Florence) we shall travel under the name of Count & Countess Reventlov – won’t we Sweety? Of course we must try and not to meet with the real R’s else we might get into no end of muddles!” (Alexander Bokhanov et al, The Romanovs, Love Power & Tragedy, Pg 68, 1993) Quite why the future Tsar picked this name as a possible incognito for himself and his bride-to-be is not clear.

Perhaps Julia became something of an additional ‘sister’ figure for Alexandra – Alexandra’s own elder sisters, Princess Victoria and Princess Elisabeth “Ella” of Hesse, were born in 1863 and 1864 respectively, with Princess Irene of Hesse following in 1866, the year of the conclusion of the war over the conflict concerning the duchies of Schleswig-Holstein, for which reason the name ‘Irene’ was chosen in the first place, meaning ‘peace’. Countess Julia Rantzau became lady-in-waiting or Hofdame, to Princess Irene of Hesse in 1892; Princess Irene had married her cousin, Prince Henrich of Prussia in 1888 – the son of Princess Alice’s elder sister Victoria and her husband, Crown Prince Frederick of Prussia. Emil von Rantzau died that same year.

Julia possibly met Alexandra for the first time at Kiel in 1892. We know this because Alexandra made several trips to Kiel in the early 1890s following the death of her father, Grand Duke Ludwig IV of Hesse, arguably the greatest loss in her life and of whom she could not speak without tears. Julia Rantzau loved music, and they are recorded as having “played” together, as well as read in one another’s company. Baroness Sophie Buxhoeveden, Alexandra’s former lady-in-waiting, recalled in her 1928 biography of the Tsarina: “[She] became one of the Princess’s closest friends… she was a bright, merry girl, and knew how to draw the Princess out….”

Julia subsequently visited Wolfsgarten, the seventeenth-century hunting-lodge of the Hessian landgraves near Langen outside Darmstadt, so beloved of Alexandra’s childhood. Alexandra visited Kiel in 1892, writing a letter in December from the Royal Castle of Kiel (or Königliches Schloss) to her maternal grandmother Queen Victoria, to thank her for her gift of a bracelet set with an image of her late father, Grand Duke Ludwig IV, as well as for sending her a volume of the works of Alfred, Lord Tennyson. Alexandra wrote a further letter to Queen Victoria, the following winter of 1893, from the Royal Castle at Kiel, both occasions on which she probably saw Julia.

It is curious to wonder what happened to the letters which Alexandra exchanged with Julia Rantzau, as it is important to remember that those letters which do exist today from Alexandra to her friends are those that were fortunate enough to have survived. Alexandra burned much of her private correspondence in 1917, to save her personal letters falling into hands other than hers. She had, in fact, asked Tsar Nicholas II to burn her letters for precisely this reason, but they were found instead in a black box at Ekaterinburg, much later. According to Alexandra’s biographer, Carolly Erickson, Alexandra burned her private correspondence from her father and grandmother and those letters from Nicholas at the time of their engagement (Carolly Erickson, Alexandra, the Last Tsarina, Pg 301, Notes Pg 369, 8). Not everything was destroyed, however, as the archives of the Russian Federation in Moscow (GARF) thankfully attest. No letters of Alexandra to Julia Rantzau have survived in the private archive of Prince Henry and Princess Irene of Prussia, something confirmed to the present author. Alexandra wrote of Julia’s letters: “Only her dear writings have remained to me…” and again to another friend: “Her letters are a joy and they help one in difficult times to do one’s duty…” Baroness Buxhoeveden recorded that the friendship must have been of very close nature, because Alexandra and Julia exchanged communication each week, writing in sort of diary form to one another.

Julia Rantzau died on 9 September 1901. It had already been a hard year for the Tsarina – the previous year 1900 had seen the loss of three of her uncles as well as the serious illness of Tsar Nicholas II, suffering from typhoid. The death of Queen Victoria at Osborne House, 22 January 1901 robbed her of the mother figure that the Queen had attempted to fill in the lives of her Hessian grandchildren – despite the geographical difference between Windsor and Darmstadt – since the death of her daughter, Grand Duchess Alice of Hesse in 1878 when Alexandra was aged six. On 18 June 1901, Alexandra’s fourth daughter, Grand Duchess Anastasia was born. In photographs that were made a short time after Anastasia’s birth, Alexandra is still dressed in black, mourning the loss of Queen Victoria.

Already in 1898, Julia Rantzau had been seriously ill. Alexandra wrote to the close friend of her youth, Magarete ‘Gretchen’ von Fabrice: “At last Irene has been able to give me good news – dear Juju is out of danger…” Julia had taken a cure at the fashionable spa town of Bad Nauheim in Hesse and then became badly ill afterwards at Hemmelmark, the estate of Prince Heinrich of Prussia at Barkelby, outside Eckernförde. Julia’s mother came to her bedside. Despite the fears of the doctors that she might suffer a heart attack, Julia received the best possible care through Princess Irene and recovered. Alexandra wrote to a friend: “I have undergone agonies, the uncertainty… poor thing… God knows if I shall ever see her again….”

Alexandra described her friend, fittingly enough, to another friend, Princess Bariatinsky: “She understood the difficulties of this world and the different temptations…. It came so naturally to speak about one’s faith to her, that now I feel her loss greatly… I pray to God to make me as worthy as she was…” And again: “Such a loss – it is very hard… only an hour before the fatal news, I received her last letter, so you can imagine what a shock it was. But I must not write to you about sad things, though my heart is full of sorrow….”

In the memoirs of Prince von Bulow, one passage relates to Countess Julia Rantzau’s friendship with the Tsarina, which in a way, sums up Alexandra’s devotion not only to Julia but to all her friends: “Princess Alix, even after her marriage, corresponded with the young Countess, and when the latter, who had been sickly from childhood, died young, the Empress of Russia did not hesitate when travelling to Darmstadt on her first visit to take the roundabout way via Kiel in order to lay flowers on the grave of her friend.”