Adelaide, the queen who met her king in a hotel 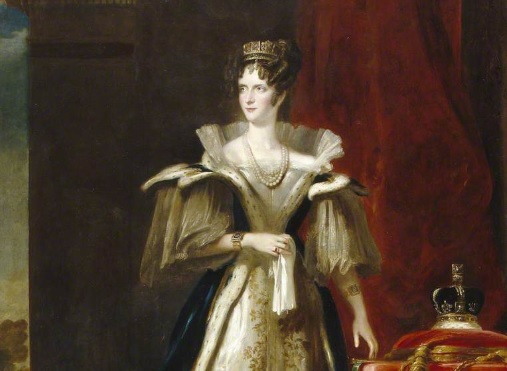 On a summer’s day in 1818, a young German princess walked into one of the most famous hotels in London to meet a man twice her age. Just a year earlier, Adelaide of Saxe-Meiningen and her suitor, William, Duke of Clarence, would never have considered chatting let alone taking the step that would inevitably follow this brief exchange. But after a short time together, with chaperones, of course, they both agreed to meet again in around a week’s time when the setting would be far more formal. For this brief interview, at Grillon’s Hotel, was the final step in their hasty plans to become husband and wife.

It was a marriage of necessity, at least for the Duke of Clarence. The British Royal Family had hit a succession crisis that needed to be resolved as soon as possible. Just nine months earlier, the crown had been destined for Princess Charlotte of Wales – William’s niece and only child of his eldest brother, the Prince Regent. But she had died in November 1817 giving birth to a stillborn son. Her death caused widespread mourning but also plunged the House of Hanover into panic mode. For while the aged and ill king, George III, had had fifteen children, there were now no legitimate grandchildren to inherit the throne in the future.

After a suitable period of mourning, several of the unmarried sons of George III and his wife, Queen Charlotte, set off in pursuit of wives – and heirs. Among them was William, the couple’s third son, who had spent most of his 52 years being rather bluff and aimiable and anything but a model prince. He was known for his long career in the Royal Navy (earning him the nickname Sailor Billy) and his equally long relationship with actress, Dorothea Jordan, with whom he had had ten illegitimate children. Several potential wives were suggested, but he settled on one German princess, partly because she seemed so keen – as far as he could tell – on his large family. William agreed to the wedding, with the words ‘’she is doomed, poor dear innocent young creature, to be my wife’’.

He needn’t have worried for the ‘’poor princess’’ in question was made of stern stuff. Adelaide of Saxe-Meiningen had been heir to her father’s throne until she was eight and had grown up in a liberal and enlightened court. She was 25 when the marriage was proposed while her groom was about to turn 53, but that didn’t deter either of them. William wobbled briefly when the allowance Parliament promised him as a married man turned out to be far lower than he hoped for but by the summer of 1818, a royal wedding day loomed.

There was just the small matter of the bride and groom actually getting to know one another to get out of the way. With the date for their marriage set for July 1818, William and Adelaide had to start talking. And they chose, as the setting for their famous face to face, one of London’s best-known hotels – the Grillon.

Set on Albermarle Street, just off Bond Street, in the centre of the capital, Grillon’s Hotel was no stranger to royalty – in 1814, Louis XVIII of France had famously stayed there as he made his way to Paris to reclaim the French throne. It had also become well known as a place where MPs and leading members of society met to talk about anything other than politics. It was here that William and Adelaide headed on July 4th 1818, for a quick chat and possibly a cup of tea – in reality, a brief chance to size each other up and see if they really could go ahead with a marriage that was all but signed, sealed and delivered.

The meeting clearly went well for just a week later, on July 11th 1818, the couple married at Kew Palace. Their wedding was a double celebration – William’s brother, Edward, exchanged vows with Victoria of Saxe-Coburg-Saalfeld at the same time. William and Adelaide then headed to Hanover where they lived for the early part of their marriage with the new Duchess of Clarence quickly credited with turning her husband into a healthier and happier man. In fact, the union proved more than successful with the sailor prince and his determined duchess growing increasingly devoted to one another.

However, one joy would elude the couple. They had at least five children, but all were either stillborn or died young. By the time they settled for good in England, it was clear that William and Adelaide would have no family of their own. Instead, they both showered affection on the little girl born to the couple who had shared their wedding day. That princess, Victoria, eventually became William’s heir when he ascended the throne in 1830.

King William IV and Queen Adelaide were a hugely popular royal couple, with the consort in particular celebrated for her good work for charity. She was so well loved that a new city set up in South Australia was named in her honour. The King and Queen also remained devoted to one another, and when William’s health failed, and death became inevitable, Adelaide stayed by his side for days.

The hotel where they first met, just over two hundred years ago, no longer stands, but it retains an important place in royal history. For while the union of William and Adelaide isn’t one of the best known or most talked about royal romances, it brought with it a stabilising influence that in some ways helped to shape the modern concept of family being at the heart of the monarchy.