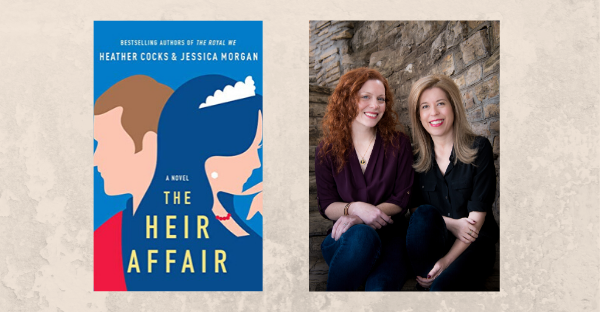 When The Royal We, the 2015 bestseller from Jessica Morgan and Heather Cocks (aka The Fug Girls) was released, fans ate up the story of Bex, an American study abroad student who marries Nick, second-in-line to the British throne.

The Will-and-Kate-esque royal couple (along with a ginger brother named Freddie and a Pippa-like sister named Lacey) have now returned in The Heir Affair, the long-awaited sequel to The Royal We.

Much like the Sussexes escaping to live a more normal life in California, the book starts with Nick and Bex in exile (and in disguise) after the fallout from the events on their wedding day. But they can’t hide forever, and eventually, duty intervenes and they must return to London.

The ups and downs of life as a young married couple at Kensington Palace are explored, along with sibling rivalry and the realities of an aging monarch, but some surprisingly weighty topics also come into play in this royal sequel. While the book has plenty of lighthearted and fun moments, Morgan and Cocks put readers through the emotional wringer in The Heir Affair and parts of the plot feel genuinely devastating and complicated on multiple levels.

Royal Central spoke to the authors about their thoughts on a changing monarchy, the challenges of co-writing a novel, and what’s next for their fictional royal family.

Kristin Contino: The Royal We is one of my favorite books ever and I have to say the sequel didn’t disappoint. Did you feel a lot of pressure to write something that matched up to the first book since it was so popular?

Heather Cocks: I absolutely did, and not even just because people were so loving toward The Royal We. We have a really wonderful community because of our website, Go Fug Yourself, and they have supported us massively as we’ve delved into novel writing. Anytime someone is spending actual money to show their support for you…I mean, that’s huge, especially in times like this. We take it so seriously. It’s an act of love, in a way. So I was terrified that people would somehow feel like the sequel was a WOMP-WOMP moment. Total sad trombone.

Jessica Morgan: It’s also honestly challenging — or at least it was for us — to come up with a plot for a sequel to a romantic comedy. We didn’t want to break up the central couple just to go through the intellectual exercise of getting them back together again, so it took some thinking to come up with something that felt high-stakes and emotionally important that didn’t undo what we’d done in the first book.

When planning The Heir Affair, what were some other plot ideas you considered but didn’t make the cutting board?

HC: I am the Grim Reaper and I always suggest killing people. So there’s that. I won’t say whom I suggested killing, but it was more than one person, and one would have been a surprise. How’s THAT for a cliffhanger?

JM:  I do think we threw a lot of things at the wall to see if they stuck, and then they ultimately did not stick. But the big one is that we did toy with the idea of killing off….a variety of folks.

How does it work with both of you writing the book? Do you take turns writing chapters, or scenes? Do you ever disagree on how the story should be heading?

HC: It usually works out to chapters, just because once you get started, and you have an idea of where you’re going, it’s hard to send something back to the other person and be like, “Okay, pick it up mid-flow, good luck!” Although there were definitely a few times where, say, an idea I was trying required me to write a little ways into the next chapter, but then I petered out, so I’d have to leave Jess a note that was like, “Is this even RIGHT? I don’t want to push further if it’s insane.” We do work off an outline, so that at the very least we know how everyone is supposed to be feeling in a given moment and where their emotional arcs are going, even if we have to move around setpieces.

JM: We don’t really disagree exactly — at least not in a major way, where one of us really wants X to happen and the other believes the story needs to be about Y, and X and Y are diametrically opposed.  Mostly we just have a long series of really complicated conversations.

A lot of the book involves the monarchy changing and evolving and the younger generation starting to step up, just like in real life. How do you see the Royal Family changing in the coming years?

HC: That’s the question of the moment, right? Just as it’s easy to sit back and observe the royals from all the way over here in the United States, where we don’t have any taxpayer stake in any of it, it’s also easy to sit back and make wild predictions when we’re not actually on the ground over there with people whose real lives would be affected by how the monarchy changes. So in that sense, any opinion I have is totally ill-informed and made of guesswork, and might seem ridiculous to a person who lives in England. But it sure feels like there is an immense fondness for their long-reigning Queen, and while people seem to love William, too, I don’t know that anyone has ever felt that kind of affection for Charles — and he’s the one who’s up next. So a lot may depend on how he steers the ship.  Will he be bold enough to streamline it, and will he be able to, or want to, change the level of activism when it comes to issues like Black Lives Matter and racism? And of course, will it be too little, too late, especially when you consider Meghan and Harry and how unsupported they felt. I think a lot is probably environmental, as well — what is the actual state of the world when Queen Elizabeth does pass the baton, metaphysically or otherwise? And how might that lead to either louder calls for radical change, or will there be an allergy to upheaval?

JM: Yes, it will be interesting to see, when the time comes, whether or not the kind of coronation we saw for the Queen will feel archaic and excessive for Charles (he may even feel that way himself). It certainly feels as if we may be on the precipice of a great change. But if there is anything I have learned in the last six months, it’s that none of us know what the future holds.

Do each of you have a favorite member of the Royal Family?

HC: I don’t really think so — they all have things about them that are fun from a spectator’s view. I do have a lot of awe for The Queen and how much of history she’s seen first-hand. Princess Anne works incredibly hard. Sophie Wessex seems to be doing a good job with that, too, but because neither is a factor in the line of succession, they don’t get as much global attention for it.

JM: I don’t really either — although some of them are more sartorially entertaining than others!  I always do enjoy seeing all the little kids together.

Is this it for Bex, Nick, Freddie, and company? (Mostly, will we ever see Freddie get his own book?)

HC: That is the great debate. I feel like… we’ve all seen TV shows where the popular secondary or tertiary character gets elevated to a more dominant role, and suddenly you’re like, “Aah, too much, you’re hijacking the show.” But then again, we’ve also all seen Dawson’s Creek, where more Pacey was never enough Pacey. We’re not sure yet in which camp Freddie resides.

JM: Never say never! But right now we’re just enjoying this one being finally out in the world.

Are you working on anything new right now that you can share with us?

HC: Honestly, our day to day is consumed right now with trying to hunt down content for GFY, because when there aren’t any NEW celebrity events, you really have to dig for fun archival things and it takes some doing! Also, the analogy I like to make is: This book was like childbirth, and we’re so glad it’s in the world, but DAMN that was a lot of work and our bodies need to recover.