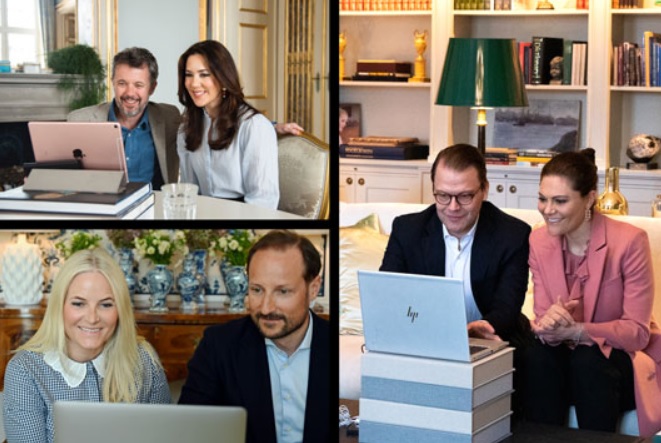 At a time when the royal present is still heavily impacted by the coronavirus pandemic, this past week has seen a focus on the past and the future for many of the ruling houses across Europe. Milestones including anniversaries and birthdays have taken centre stage while tentative steps towards a return to some kind of normality have also featured. Here’s the past seven days, in pictures.

There was a right royal get together in the week as the heirs to the thrones of Norway, Sweden and Denmark and their spouses took part in the ultimate regal video call. Crown Prince Haakon Magnus and Crown Princess Mette-Marit linked up with Crown Princess Victoria and Prince Daniel and Crown Prince Frederik and Crown Princess Mary for a chat about their patronages. Sadly, there were no Zoom quizzes or karaoke but the six, all good friends, ended with a heartfelt wish that soon, they will be able to meet again in person.

A Virtual Day Out

King Willem-Alexander of the Netherlands turned 54 on April 27th and took the lead in celebrations for a very different King’s Day. People were asked to stay at home to mark the annual festivities for the Monarch’s birthday. Willem-Alexander, accompanied by Queen Maxima and their three daughters, headed to Eindhoven where they took part in a special broadcast for King’s Day. Although still markedly quiet in comparison to the usual crowds, it was a step towards normality after the royals celebrated last year’s event indoors as the coronavirus pandemic took hold.

The King of Sweden celebrated his 75th birthday on April 30th but this milestone was also muted because of the coronavirus pandemic. Carl XVI Gustaf was presented with a medallion portrait that will hang in the RIksdag. He also took a salute from representatives of Sweden’s Armed Forces and got a surprise present in the form of a flyover from the Veteran Aviation Association. Carl Gustaf was born on April 30th 1946 and became King of Sweden on September 15th 1973. His reign is currently the longest of any male monarch in Europe.

The Monarch and the Motorbike

King Felipe VI headed to one of the least densely populated parts of Spain in the week for a visit to the Civil Guard station. During his time in Valencia de Alcántara he was given an overview of the work going on in the area and was shown some of the facilities available, including a rather shiny motorbike used in traffic patrols. It was one of a number of engagements for Spain’s king during a busy week which has seen him and Queen Letizia out nearly every day as their royal diary heads back to pre-pandemic levels.

New beginnings on an anniversary

The Duke and Duchess of Cambridge celebrated ten years of married life on April 29th and after a sad and difficult few months for the Royal Family, their anniversary provided plenty of smiles. William and Kate posed for two new portraits and also shared a video of themselves with their three children, enjoying beach life in Norfolk. It was a happy day after a month of tears and farewells.