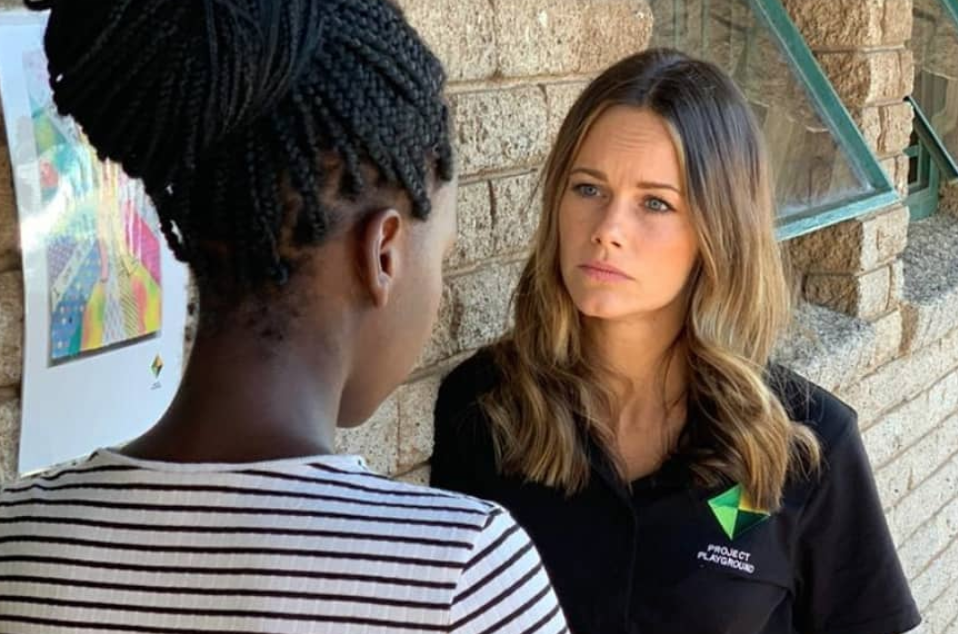 Princess Sofia of Sweden has recently arrived back in Sweden after a visit to the charity she co-founded, Project Playground, in Cape Town, South Africa. As Honorary Chair, the Princess remains actively involved in the non-profit organisation.

It has been a while since Princess Sofia of Sweden had undertaken an official engagement or visit. Two weeks ago, the Princess was last seen on an outing with her parents-in-law Queen Silvia and King Carl Gustaf, the Crown Princess Couple and her niece, Princess Estelle when they attended a concert given by the music school Lilla Akademien. The concert was a belated gift for Queen Silvia’s 75th Birthday. Princess Sofia has now given a reason for her unusual absence from royal duties.

On Instagram, the wife of Prince Carl Philip of Sweden shared some happy snaps from her recent trip to Cape Town, South Africa. Princess Sofia visited ‘Project Playground’, the charity she co-founded in 2010 with her friend Frida Vesterberg. The non-profit organisation supports vulnerable children and youth at different stages of life in South Africa. Since the refugee crisis hit Sweden in 2015, the organisation has expanded its expertise and work to various areas in Sweden. ‘Project Playground’ saw strong similarities between the children of refugees with the organisation’s target groups in South Africa.

Princess Sofia thus founded the charity before joining the Swedish Royal Family through her marriage to Prince Carl Philip in 2015. Therefore, her recent visit to the project was in a private capacity. Upon her marriage, it was announced that Sofia would take a step back as director of the organisation. Instead, the Princess became Honorary Chair of Project Playground. In this capacity, Sofia visits the projects in South Africa at least once a year.

In her message about the visit, the Duchess of Värmland wrote: “The end of a productive and fantastic time with my colleagues at Project Playground in South Africa.” It’s unknown whether Princess Sofia was joined by her husband and/or children on her visit to Cape Town.

Her Royal Highness also shared the happy news that she and her colleague Frida were able to meet with the Premier of Western Cape, Alan Winde to talk about the work of Project Playground in the area. The meeting took place earlier this week and the Premier seemed to be impressed with the work of the two leading ladies of the organisation. Mr Alan Winde tweeted: “I look forward to further engagements around the expansion of Project Playground as it plays a fundamental role in keeping our children safe and also provides meaningful social and personal development to shape responsible adults who will contribute to the well-being of society.“

At this moment, Princess Sofia is back at home to enjoy a short break with her husband and two sons, Prince Alexander and Prince Gabriel. Both Sofia and Carl Philip will resume their work with a board meeting of their foundation on the 3rd of March.