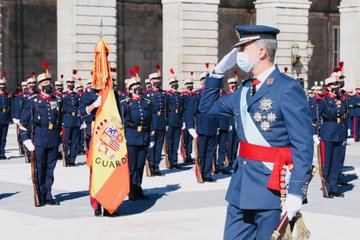 It was a muted celebration in difficult times. King Felipe VI has led Spain’s National Day celebrations but the event looked very different from the spectacle that usually takes over Madrid. The pandemic always meant that the usual military parade and reception would be scaled back but just days ago the city was placed under a State of Alarm by the government over concerns about a new wave of coronavirus. Movement in and out of Madrid is severely curtailed but authorities in the capital as well as many residents are unhappy with the restrictions. It’s against that backdrop that King Felipe, along with Queen Letizia and their daughters, Princess Leonor and Infanta Sofia, attended a scaled back parade inside the confines of the Royal Palace. Here, Royal Central looks at the best images of the day.

Despite strict regulations, crowds gathered outside the Royal Palace with Spanish flags as the events marking the country’s National Day got under way.

The commemorations themselves took place behind the palace walls, in the Plaza de la Armeria. King Felipe, Queen Letizia, Princess Leonor and Infanta Sofia were greeted by the Prime Minister of Spain, Pedro Sanchez, and other dignitaries.

The parade itself was much reduced with just over 500 participants from the military. All of them are based in Madrid with the exception of The Spanish Legion which was given special permission to take part as this year marks its centenary.

Following the parade, there was a very brief meeting between the royals and some of the dignitaries involved. It was a National Day commemoration like no other.