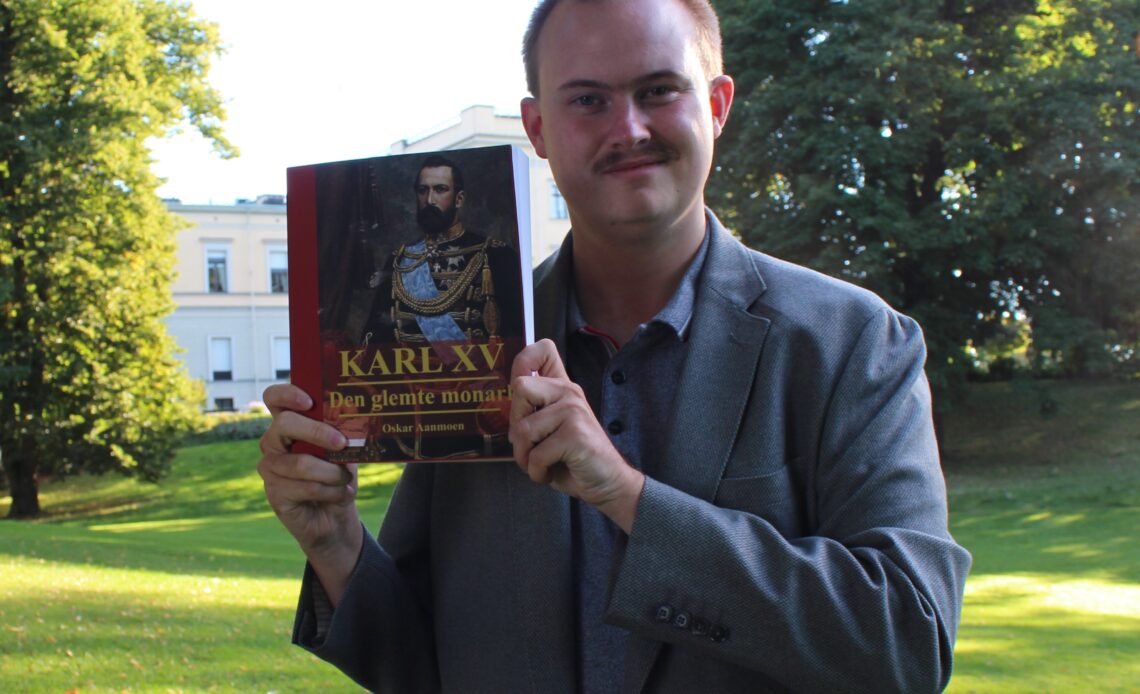 Royal Central’s Europe Correspondent, Oskar Aanmoen, has had a busy year. As well as covering the continent’s royal families in a time of unprecedented challenges, he’s also been completing a brand new book. Oskar, who has already published five books, is now proud to present his latest work – on King Karl XV who ruled Norway and Sweden in the 19th century.

Although this historic monarch might not be the most familiar name in royal family trees, his influence on both countries was immense. However, until Oskar began his research, no authoritative work on his life and reign had been published in over a century. Thanks to some royal support, that’s all changed and Oskar Aanmoen can now present his fresh perspective on this modernising monarch – Karl XV, Den glemte monark (the Forgotten Monarch). Royal Central spoke to Oskar about his inspiration and discoveries.

ROYAL CENTRAL: Oskar, you’ve described Karl XV as one of the most unknown monarchs of Norway and Sweden – why do you think he is so overlooked?

OSKAR AANMOEN: I also wondered about this when I started to research but over time there was only one real reason. Karl did a lot as king, so he should not have been overlooked. The reason why he is perhaps Norway and Sweden’s least known monarch is because of his own brother. King Karl had no sons, so he was succeeded by his brother, the more famous King Oscar II. Karl and Oscar were, to put it mildly, bitter enemies through much of their lives. Oscar hated his brother because he was more liked than himself. In fact, Oscar spent his entire royal career trying to push his brother’s memory out of the history books. Unfortunately, he succeeded. Books about King Karl were discarded, paintings were taken down, and throughout Oscar`s reign no statues of his brother were erected. Funnily enough, while Karl was forgotten, Oscar has since become known as the most unsuccessful monarch of the Norwegian-Swedish union as the union collapsed under his rule in 1905.

What did Karl’s subjects think of him during his reign?

King Karl was much loved by his people, almost throughout his reign. The only time his popularity suffered a setback was in the years 1868-69. Then, there was a famine in Northern Europe and the King’s lavish use of money was viewed with criticism. Besides this, he was respected and loved. Karl was a kind of transitional monarch. During his time, Sweden and Norway went from being absolute monarchies to more constitutional monarchies. The governments of both nations were perceived as controlled by the rich and egotistical elite. The king, on the other hand, was very popular, often wearing ordinary clothes and often taking the side of the poor when it came to political issues. In this way, Karl created an image as one who fought for the ordinary citizens of society.

What made you want to find out more about his story?

In my work, I often research how the Bernadotte family has influenced Norwegian politics and social development. When I was reading up on this subject, I realized that in the recent decades, extensive literature has been published on all of the Berndotte monarchs, with the exception of Karl XV. I investigated this further and found out that no good historical work had been published about him, in any language, in over 100 years. The knowledge of him was deficient and old. I presented the problem to the University of Oslo, the Norwegian Historical Association and the Norwegian Writers’ Association. The answer was clear and became my task to map the life of this unknown monarch. Thanks to help from the King of Sweden and the King of Norway, I have gained access to unique sources and a lot of knowledge no one before knew about King Karl.

How important is he in the royal history of Norway and Sweden?

In short, Karl was extremely important. I could talk for hours about what he did politically and militarily for Norway and Sweden. To list the most important things, he gave the nation a new and more liberal legal system. The death penalty was removed – one of the first countries in Europe to make this major change. Karl upgraded the military to meet German and Russian aggression. He raised living standards through a series of absolutely essential agricultural reforms and pursued a Western-style foreign policy with the desire to draw the Union closer to France and Britain. At the same time, he created a lot of chaos in his own time. He is without a doubt the king with the most illegitimate children. He was not well liked by large parts of his own family. When he became a widower at the age of 45, he tried to marry an 18-year-old Polish Count’s daughter, a marriage that was stopped because his own mother entered into a secret agreement with the kings of Spain and Italy. He also spent his entire life trying to go to war against Russia to take Finland back under Swedish control.

What is his legacy?

The enormous change in the Norwegian and Swedish legal system is perhaps the most visible legacy of Karl today. Norway and Sweden have made very few changes to the legislation that Karl himself worked on in the 1860s. This says something about how modern and liberal it was, that it can still be used today. Another thing that many do not think much about is that Karl was a great advocate for building more railways. Here he was opposed as many in Norway and Sweden thought it was better to build canals. Fortunately, Karl got through a number of railways that are still understood to be absolutely essential in Norway and Sweden. He is considered the father of the train in Northern Europe.

You’ve spent a lot of time with him in the past few years – do you like him?

Well, I am not quite sure to be honest. Karl did a lot of good and some things that can otherwise be described as strange. He was modern and liberal at the same time as he was an instigator of war and twice tried to commit coups himself, but the plans were never put into action. He had rather bad morals, at times, and mistresses in most cities. All in all, though, I think he was a nice man. Although many may criticize his morals, I still have not managed to find a single source who says that the king was rude or sinister. It is quite exceptional and in stark contrast to sources about the other monarchs in his family. At least I have become very well acquainted with Karl through my work in recent years and can say with the greatest certainty that his story deserves more attention than it has received.