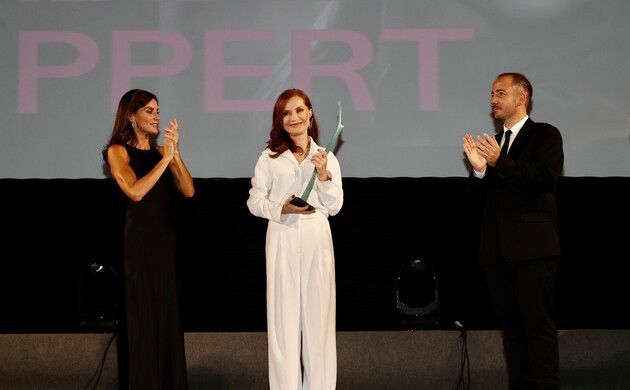 Queen Letizia arrived at the La Misericordia Cultural Centre on the closing night of the film festival and was accompanied by the President of the Balearic Islands, Francina Armengol, as well as other cultural and governmental dignitaries, along with Jaume Ripoll, the Director of the Atlàntida Mallorca Film Festival.

During the closing ceremony awards, Queen Letizia was on hand to congratulate director Samuel Theis for his prize of Best Film for the French film Sophie before presenting the 2022 Master of Cinema Award to the iconic French actress Isabelle Huppert.

Huppert said in a press conference afterwards, “It is an honour for me, and I am very happy because I really like this festival, which is precisely dedicated to giving visibility to new directors and new talents, something that I find very interesting.”

Following the awards portion of the closing ceremony, Queen Letizia watched a film screening of El Falsador by director Kike Maillo and listened to a musical performance by pianist Amaia Romero.

The Atlàntida Mallorca Film Festival ran from 24 to 31 July and was created 12 years ago as an online film festival to ensure that international films that rarely screen in traditional movie theatres are shown to interested moviegoers.

The Spanish Royal Family typically spends their summer holiday in Mallorca, with the family posing for a photocall at the Cartuja de Valldemossa earlier in the week. The visit also included a walkabout through the streets of Valldemossa.