Dutch Royals make a video call tour of the Netherlands 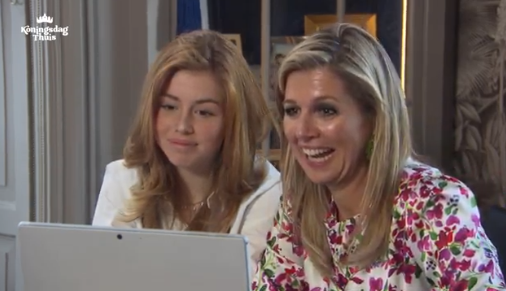 King Willem-Alexander and his family have been video calling all around the Netherlands this morning and this afternoon.

King Willem-Alexander and Queen Máxima joined a call with several healthcare professionals of the UMC Maastricht Hospital who were eating a traditional tompouce during the break with the Mayor of Maastricht. Maastricht would have been the scene of King’s Day 2020 if the events had not been cancelled due to the Coronavirus.

King Willem-Alexander later joined a workshop of Anna Yilmax of the program Heel Holland Bakt (the Dutch version of the Great British Bake Off) while Queen Máxima joined a piano workshop with singer Jeroen van der Boom. Princess Alexia and Queen Máxima later joined a vlogging workshop with well-known Dutch vlogger Enzo Knol. When asked what Queen Máxima was like behind the scenes, Princess Alexia revealed that despite her mother’s busy job, she does a great job as a mother. Máxima cheered and exclaimed, “This was not scripted!”

Catharina-Amalia, the Princess of Orange, had her own video call, with her proud mother looking on, with Dutch equestrian Anky van Grunsven and other horse enthusiasts.