Who is Princess Claire of Luxembourg? 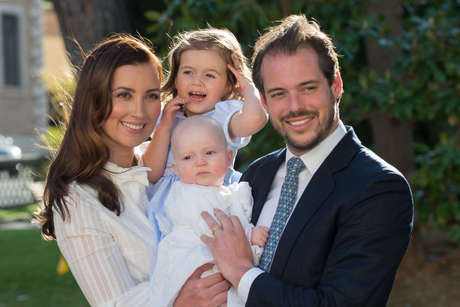 Claire Margareta Lademacher was born to Gabriele and Hartmut Lademacher on 21 March 1985 in Filderstadt, Baden-Württemberg, Germany. She has one older brother, Felix.

Claire spent most of her childhood with her family in Usingen, which is a district of Haut-Taunus in Germany. She did spend a short time in Atlanta, Georgia, USA, during her youth where she attended the Atlanta International School beginning at age 11. The family returned home to Germany in 1999 whereupon the future royal was enrolled at the Frankfurt International School in Oberursel. Later, she would spend her last two years of compulsory education in Switzerland at the Collège Alpin International “Beau Soleil”; she graduated from the institution in 2003 achieving A-levels, as well as Prize of Excellency for extraordinary merits according to the Grand Ducal Court.

A highly educated woman, Her Royal Highness holds degrees in History, English, German, Psychology and Art in the form of a Bachelor’s degree in 2007. After completion of these degrees, she began studying in Paris at the American University of Paris to take a course on international communication. Claire later studied for a Master’s degree in bioethics at the Pontifical Athenaeum Regina Apostolorum in Rome, graduating with the highest honour distinction of summa cum laude. The Grand Ducal Court said that in coordination with her studies during this time, she also worked for the Chair of Bioethics and Human Rights of UNESCO.

Her education did not end there. The Princess went on to complete a doctorate regarding “the ethical aspects of consent to organ donation” from the same Italian school, according to the Court. During this time, she was welcomed as a guest researcher at the Kennedy Institute of Ethics at Georgetown University in the United States’ capital of Washington D.C in the autumn of 2012. Aside from her native German, she also speaks English, French and Italian.

Claire’s first job was at the Condé Nast publishing house in New York and Munich after receiving her undergraduate degree. She later worked at IMG World in Berlin as a project manager.

She is known to enjoy dance, travelling and sports. She loves to ski and play tennis, volleyball and badminton.

She had been seen out with His Royal Highness on numerous occasions, including to the wedding of Félix’s cousin, Archduke Imre in Washington DC earlier that year. She also attended the marriage of the Hereditary Grand Ducal Couple but did not sit with the Prince. Reportedly, the couple met while Claire was studying in Switzerland.

Félix and Claire were married in both a civil and religious ceremony. The civil ceremony was held, as is customary in the bride’s hometown, in Königstein im Taunus, Germany, on 17 September 2013 at the Villa Rothschild Kempinski. Their religious service took place on 21 September at the Sainte Marie-Madeleine Basilica in France.

Princess Claire and her husband are not full time working members of the Grand Ducal Family. They only carry out a few engagements a year and reside in Frankfurt, Germany, since August 2018. They also manage the French winery owned for many years by the Lademacher family Château les Crostes à Lorgues, and Claire works as a bioethics researcher.

Her Royal Highness is the high patron of Luxembourg Transplant asbl, where she utilises her educational and research background for the organisation. In addition, she supports the Le Sourire de Lucie Foundation. The foundation is very active in research for rare diseases with the Sjögren-Larsson syndromes as a focal point. She has also been involved in humanitarian projects in Tirupur, India.

Beginning in February 2018, Claire was a visiting professor at the Faculty of Bioethics of Ateneo Pontificio Regina Apostolorum University in Rome, Italy. Additionally, in March 2018, she took part in the Conference of Ethics in Action, “Modern Slavery, Human Trafficking and Access to Justice for the Poor and Vulnerable” at the Vatican’s Pontificia Academia Scientiarum.