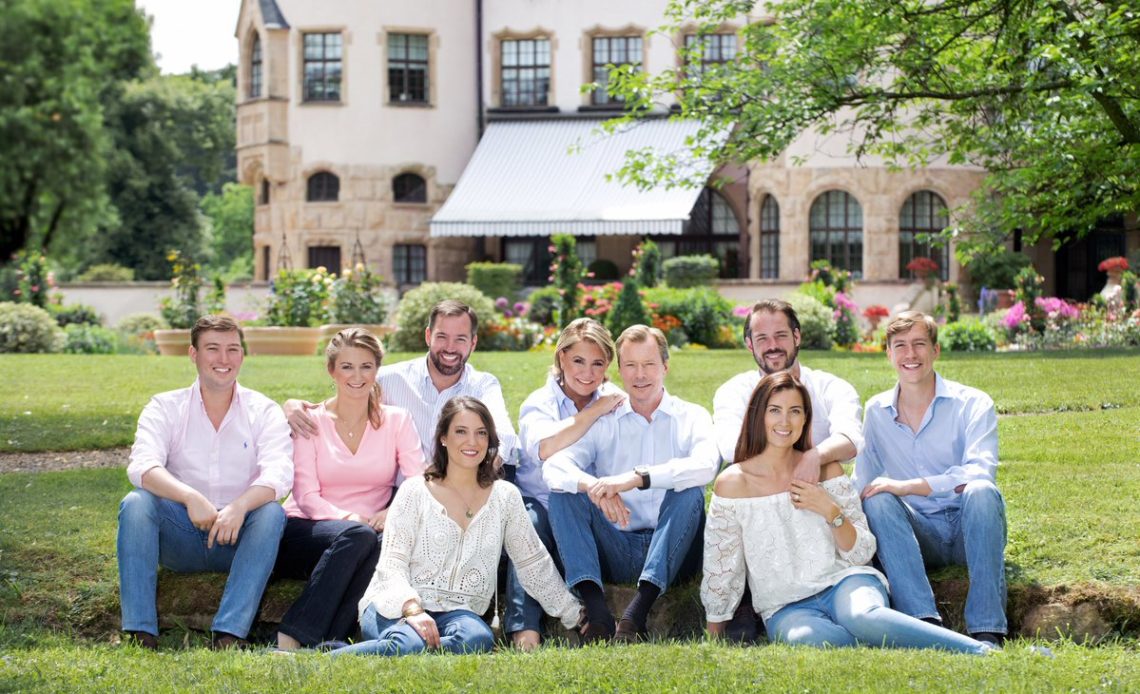 As Grand Duke Henri is set to celebrate 20 years on the Grand Ducal Throne this month, we are taking a look at his immediate family.

Grand Duke Henri’s wife was born in Cuba in 1956. Her family left Cuba after Fidel Castro took control and headed to New York. She met Grand Duke Henri during university in Switzerland. They married on 14 February 1981 in a religious ceremony after a civil ceremony on 4 February. Together, they have five children and five grand children.

Hereditary Grand Duke Guillaume was born on 11 November 1981 while his father was the heir. Guillaume became the heir upon his grandfather, Grand Duke Jean’s abdication in 2000 when Henri became Grand Duke. Guillaume married Belgian Countess Stéphanie de Lannoy in October 2012. Together, they have one son, Prince Charles, who was born on 10 May 2020.

Countess Stéphanie de Lannoy was born into a Belgian noble family on 18 February 1984. She married the heir to the Grand Ducal Throne in 2012. They have one son, Prince Charles.

The second in line to the Luxembourgish throne was born on 10 May 2020. He just recently had his christening.

Prince Félix is the second child of the Grand Duke and Grand Duchess; he was born on 3 June 1984. He married German-born Claire Lademacher on 21 September 2013 in a religious ceremony after a civil ceremony took place on 17 September. They have two children: Princess Amalia and Prince Liam.

Claire Lademacher was born on 21 March 1985 in Germany as the only daughter and second child of Hartmut and Gabriele Lademacher. She married Prince Félix in 2013, and they have two children: Princess Amalia and Prince Liam. The family lives in Germany.

Princess Amalia is the elder child of Prince Félix and Princess Claire; she was born on 15 June 2014. At the time of her birth, she was third in the line of succession and the future Grand Duchess of Luxembourg. Upon the birth of her cousin, Prince Charles, she moved down to fourth place, and he is now the future Grand Duke.

Prince Liam is the younger child of Félix and Claire and was born 28 November 2016. He was christened in the Vatican in April 2017.

Prince Louis is the third child of the Grand Duke and Grand Duchess. He was born on 3 August 1986. He gave up his place in the line of succession (and that of his children) when he married Tessy Antony in 2006. The couple have two children: Prince Gabriel and Prince Noah. They divorced in 2019. Louis lives in Paris.

Prince Gabriel is the elder son of Prince Louis and Tessy Antony de Nassau. He was born on 12 March 2006, and he was granted the title of Prince de Nassau and style of Royal Highness by his grandfather on National Day in 2009. Gabriel primarily resides in London with his mother and brother.

Prince Noah is the younger son of Louis and Tessy; he was born on 21 September 2007. He was granted the title of Prince de Nassau and style of Royal Highness by his grandfather on National Day in 2009. Noah primarily lives in London with his mother and brother.

Princess Alexandra is the fourth child and only daughter of the Grand Ducal Couple. She was born on 16 February 1991 and was excluded from the line of succession until 2011 when absolute primogeniture came into effect for the descendants of Grand Duke Henri. Alexandra is now sixth in line.

Prince Sébastien is the youngest child of the Grand Duke and Grand Duchess; he was born on 16 April 1992 (his father’s birthday). He lives in the United Kingdom and serves in the “Irish Guards” regiment of the British Army – just like his grandfather, Grand Duke Jean.