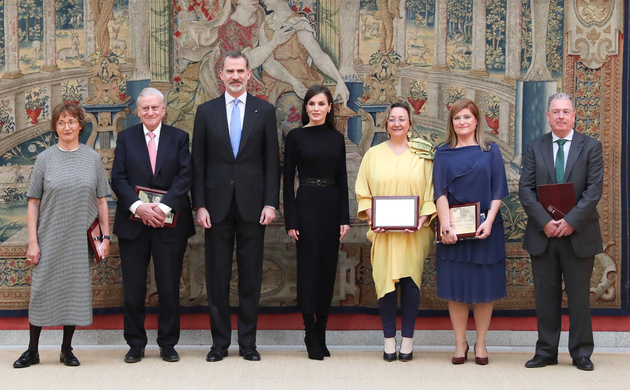 Spanish leaders in science were honoured Monday when King Felipe VI and Queen Letizia presented the 2019 National Research Awards at the Royal Palace of El Pardo in Madrid.

King Felipe praised the winners, saying, “You know well – and so many times you remind us – that good science, high-altitude research, and great impact, requires not only resources, always scarce; you need – with almost equal demand – for stability, foresight, patience in the times and rigour and ethics in the processes.”

He also shared his appreciation for their “exemplary dedication and commitment in favour of science and knowledge” and pride at how these scientific leaders were impacting the country.

“Your daily work and your success undoubtedly contribute to the greater social welfare of citizens,” he said. “And you are the evidence of the scientific talent that our country treasures, a talent that we have to take care of with care and long-term vision.”

“I will not get tired – we will not get tired – of insisting on the importance of science for our present and future, and the need for Spain to be at least at the level of investment in science and innovation of the countries around us and the EU average. All of us – university, companies, administrations, and society as a whole – must do everything possible to increase the capacities, quality, and excellence of Spanish science.”

The King added that science “generates wealth and jobs, improves life, favours development and, yes, for all this, it also gives great prestige as a country.”

The awards were given to:

Valentín Fuster Carulla: “Gregorio Marañón” National Prize for Medicine for “his contributions to research, prevention and diagnosis and treatment of cardiovascular pathology.”

Angela Nieto Toledano: National Prize “Santiago Ramón y Cajal” of Biology for being “a pioneer in the study of the epithelial-mesenchymal transition, a biological process transcendent in understanding the origin of cancer and degenerative diseases of ageing.”

Susana Marcos Celestino: “Leonardo Torres Quevedo” National Engineering Prize for her “pioneering contributions to optical and photonic engineering, and to the industrial development of diagnostic and correction instruments in ophthalmology, which have benefited thousands of patients.”

Manuel Francisco Carreiras Valiña: National Prize “Pascual Madoz” of Law and Economic and Social Sciences for his work “dedicated to increasing equal opportunities in atypical problems (deaf people, with dyslexia, illiterate or neuro-typical); also his work on bilingualism and sign language is excellent.”

Mercedes García-Arenal Rodríguez: National Award “Ramón Menéndez Pidal” of Humanities for his historical work with religious minorities, which “helps to analyse the possibilities of coexistence between diverse cultures, including their inevitable conflicts and their overcoming.”

According to Casa Real, “These awards are granted by the Secretary of State for Universities, Research, Development and Innovation, which recognise the merit of those researchers of Spanish nationality who are carrying out outstanding work in scientific fields of international relevance and who contribute exceptionally to the advancement of science, to the best knowledge of the human being and his coexistence, to the transfer of technology and to the progress of humanity.”