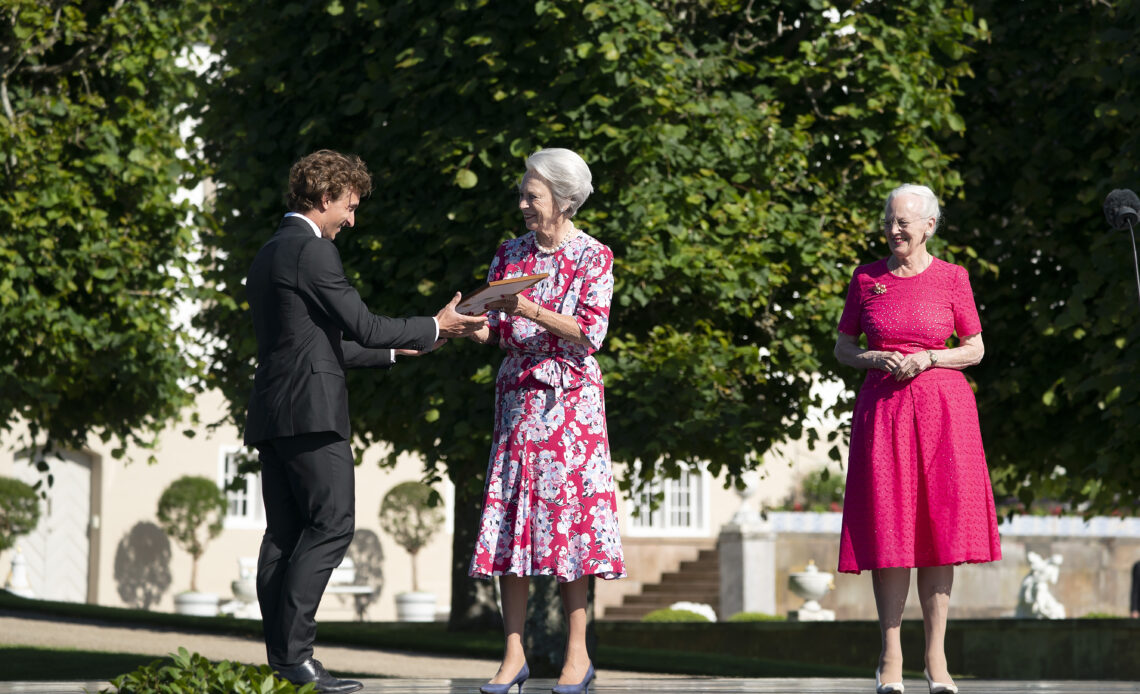 Queen Margrethe of Denmark teamed up with her younger sister Princess Benedikte on Sunday for a rare royal event as coronavirus restrictions continue. On Sunday the two attended a small ceremony to hand out the “Queen Ingrid’s Honorary Legate”. The ceremony happened in the private garden at Fredensborg Castle.

Queen Margrethe and Princess Benedikte unfortunately had to oversee the traditional ceremony without their sister, Queen Anne-Marie of Greece. She usually attends these events but due to travel-restrictions, Queen Anne-Marie is unable to leave Greece to go to Denmark.

It was also due to the coronavirus crisis that the awards ceremony on Sunday took place in the private part of Fredensborg Palace Garden. Usually the ceremony would be held in the Tivoli Concert Hall in downtown Copenhagen and is followed by a tribute to Queen Ingrid in the subsequent days.

Back in March, Princess Benedikte revealed that the grant in memory of her mother of 250.000 Danish crowns would be presented to bassist Nicolai Elsberg and ballet dancer Tobias Praetorius.

Both Queen Margrethe and Princess Benedikte thanked the distinguished scholars. Nicolai sang Mozart’s “In diesen heil’gen Hallen” from the opera “The Magic Flute”, while Tobias Praetorius danced to music by Ravel with Stephanie Chen Gundorph before the former scholarship recipient in 2018, solo dancer Astrid Grarup Elbo, danced a new ballet created by Tobias Praetorius during the coronavirus pandemic.

Queen Margrethe began living in isolation herself at the beginning of the coronavirus crisis when she spoke in a TV address to Denmark. Now the royal isolation is over and the Queen has begun to appear outside the castle again. Later on Sunday the Queen enjoyed herself in the Tivoli in Copenhagen with her sister, Princess Benedikte.

This was the first time the two sisters met after the crisis according to Danish media. The two sisters attended a ballet performance “Cinderella” at the Pantomime Theatre in the Copenhagen Tivoli. This is a performance that Queen Margrethe has created costumes and scenography for.