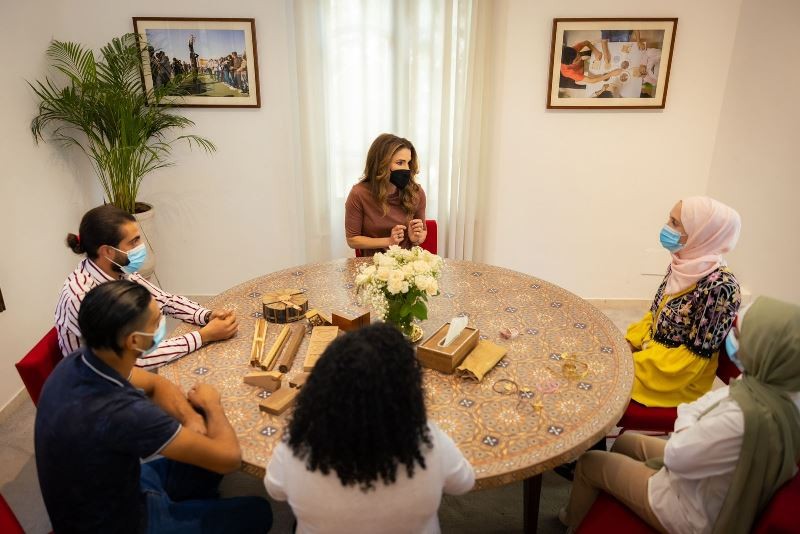 When you think of the Prince of Wales, your mind might not instantly go to Jordanian crafts, but Queen Rania was able to meet a group of local artisans who have benefitted from an international cultural heritage organisation he launched.

Her Majesty visited the Turquoise Mountain showroom in Jabal Amman on 11 October to learn more about the organisation and how it supports cultural heritage.

Dressed casually in flared jeans and a t-shirt, she was greeted by Country Director Richard Dwerryhouse, who showed Queen Rania around the facilities and introduced her to a group of artisans assisted by Turquoise Mountain’s training and employment services. Queen Rania also observed a jewellery-making workshop where she could see the non-profit’s work in action.

Turquoise Mountain was launched by Prince Charles in 2006 and initially focused on crafts in Afghanistan, later expanding to Jordan, Saudi Arabia, and Myanmar. The organisation’s Jordanian branch launched in 2018 and today employs around 70 people.

Queen Rania spoke with young artisans about their training and how they have been impacted by taking part in Turquoise Mountain’s various learning opportunities, such as jewellery-making, woodworking, and design workshops. She also heard about how these programmes foster a spirit of cultural exchange between Jordanian and Syrian artisans.

The organisation works closely with those displaced by conflict to enable them to reconnect with their cultural heritage through both in-person and online teaching.

“We began working with Syrian families in Azraq and Zatari refugee camps using hands-on activities to learn about traditions such as Mosaic, Islamic Geometric Patterns, Storytelling, Traditional Songs, Folklore Dance, and much more,” Turquoise Mountain states on their website.

“The curriculum was built around the model of a typical Arabic house, with the project culminating in its decoration and construction using the skills developed through the course.”

The non-profit also hosts a cultural heritage program for children between the ages of six and 16 and recently cooperated with the Jordan River Foundation on a re-engagement program for out-of-school children, preparing them to rejoin the education system.

Members of the public can support Turquoise Mountain’s work by purchasing items ranging from candle holders to jewellery to mirrors through their online shop.