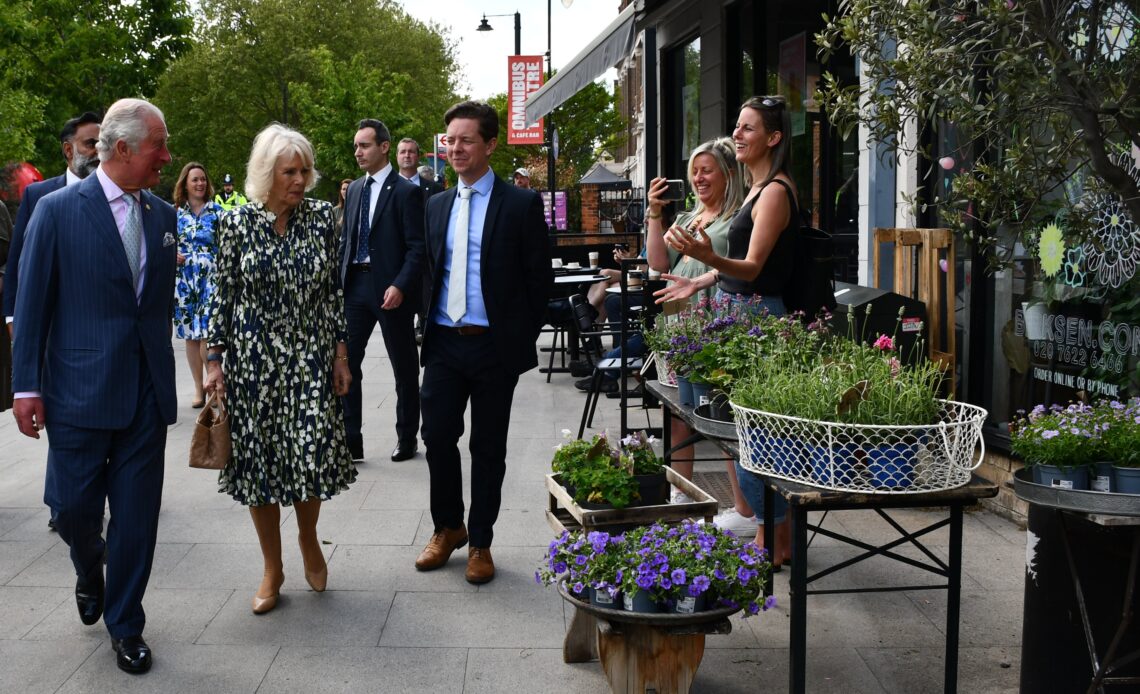 Outside of the Omnibus Theatre, the Prince and Duchess were first introduced to Jeremy Keates, Manager of This Is Clapham and Christopher Wellbelove, Councillor at Clapham Town Ward. They then met with Omnibus Theatre staff and discussed reopening plans for the theatre.

Clapham is a busy and popular area. In 2014, a new £2.6 million public space was unveiled for the Clapham Old Town Regeneration Project, a joint venture between Lambeth Council and Transport for London. The town square, cycle paths and cycle stands, and step-free pavements have been welcomed by the busy community.

Their Royal Highnesses continued walking down the hill, to meet with other independent business owners, including Birksen Florist and the Prince of Wales pub. They spoke of the difficulties faced during closures, and what they have planned for reopening.

After meeting with various business owners and residents, Charles and Camilla stopped at a pub, appropriately named the Prince of Wales.

Charles went behind the bar and pulled a pint of beer, joking that he would like to travel the country visiting every pub called The Prince of Wales to get a free drink.

The Prince is a firm supporter of the hospitality industry, and in a message last summer said: “I can only express my warmest appreciation for the resilience and fortitude  shown by those in hospitality and offer my deepest sympathy to those who are  struggling to keep their businesses going or are having to cope with the  appalling misery of seeing their businesses go into administration.”

Their Royal Highnesses finished their Clapham visit by meeting with fire fighters at Clapham Fire Station to thank them for all of their service.