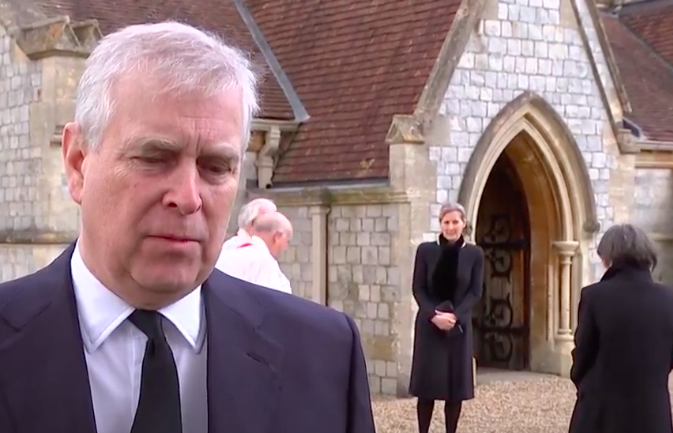 The Duke of York has paid tribute to his father saying “we have lost the grandfather of the nation.”

Prince Andrew added that we “are all feeling a great sense of loss.”

Speaking of his mother, The Queen, Andrew said that her husband’s death has “left a huge void in her life.”

Andrew was speaking to journalist outside a private service at the The Royal Chapel of All Saints of Royal Lodge in Windsor Great Park.

“It’s a great loss. I think the way I would put it is we’ve lost almost the grandfather of the nation”

Prince Andrew pays tribute to his father the Duke of Edinburgh following his death.

He said:“It’s a total loss. My father said to me on the telephone a few months ago that we are all in the same boat and we must always remember that.

“My father’s death has bought home to me not just our loss, but actually of the loss everybody else has felt for the people who have lost loved ones during the pandemic.

“So we are all in the same boat… we are all feeling a great sense of loss. At the same time the tributes have been absolutely amazing. The messages I am getting are absolutely outstanding.

“I just want to say how grateful we are for these tributes.

“He was a remarkable man. I loved him as a father, he was so calm. If you had a problem, he would think about it.

“He was always somebody you could go to and he would always listen.

“We have lost the grandfather of the nation. I feel very sorry and supportive of my mother who is feeling it probably more than everybody else.

“She described it as leaving a huge void in her life. The family are rallying around to make sure we are there to support her.

“I know that there is a huge amount of support, not just for her, but for everybody as we go through this enormous change.”