The Duchess of Cambridge plays tennis with Britain’s champions 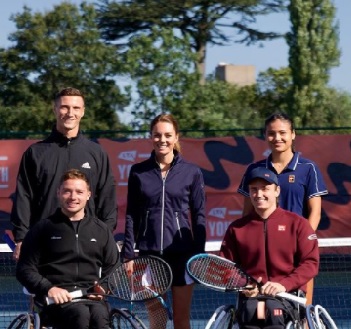 The Duchess of Cambridge has taken to the tennis court with four British Grand Slam winners at a meeting with some of the country’s biggest sports stars.

Kate, who is patron of the Lawn Tennis Association, met the champions at a special homecoming event for them. Hosted by the LTA Youth Programme, it took place at the National Tennis Centre in Roehampton on September 24th 2021.

The celebration marked the success of British players at the recent US Open. Eighteen year old Emma Raducanu made history when she became the first qualifier to win a Grand Slam as she claimed the Women’s Singles title. Kate also met another pair of record breakers. Gordon Reid and Alfie Hewett won the Men’s Wheelchair Doubles at Flushing Meadow, becoming the first team ever to take all four Grand Slam Wheelchair Doubles events in the same season and the same year. The fourth champion to greet the Duchess was Joe Salisbury who claimed the Men’s Doubles Title with his American partner, Rajeev Ram, at the US Open.

Kate took to the court with all four and chatted to them about their successes.

The event also spotlighted the future of the sport. Kate spent time chatting to teenagers playing tennis at grassroots level and hearing about the LTA’s work across the country to encourage young people to take up the sport. The organisation’s Youth Programme, for 4 to 18 year olds, aims to get more children starting tennis and staying with it to grow the sport across Britain.

The Duchess of Cambridge is well known for her passion for tennis. As well as being patron of the LTA, the national governing body for tennis in Great Britain, she is also patron of the All England Lawn Tennis and Croquet Club and is now a regular presenting the trophies at its main event at Wimbledon.