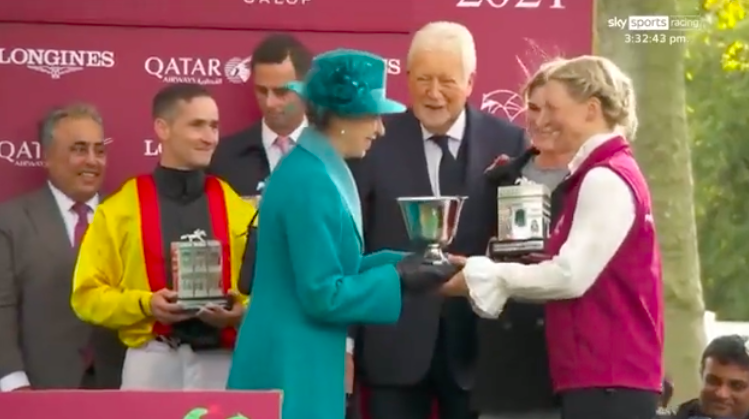 The Princess Royal kicked off her two-day visit to Paris with a visit to Longchamp Racecourse to watch the 100th running of Europe’s richest horse race – the Prix de L’Arc de Triomphe.

Her Royal Highness watched the German trained horse, Torquator Tasso, romp to victory in the race in what has been described as one of the biggest shocks in horse racing history.

The little known Torquator Tasso won at odds of 80/1 beating horses which have previously won the Derby, the Oaks and the St Leger.

After the race, Princess Anne presented the trophy to winning connections as tens of millions of people around the world tuned in.

Ridden by Rene Piechulek and trained by Marcel Weiss, Torquator Tasso‘s pick up €2,857,000 in prize money for their Arc success.

Princess Anne is undertaking the two-day visit to Paris for a series of engagements surrounding sport.

As a long-time member of the International Olympic Committee, she is meeting with representatives of the Paris 2024 Olympics and Paralympics as they being planning the competitions in earnest.

This is the first time Princess Anne has traveled abroad in 2021. She is usually present at the Olympic Games, but was unable to attend this year’s Summer Olympics or Paralympics in Tokyo, instead sending virtual greetings to the athletes competing on behalf of Team Great Britain.