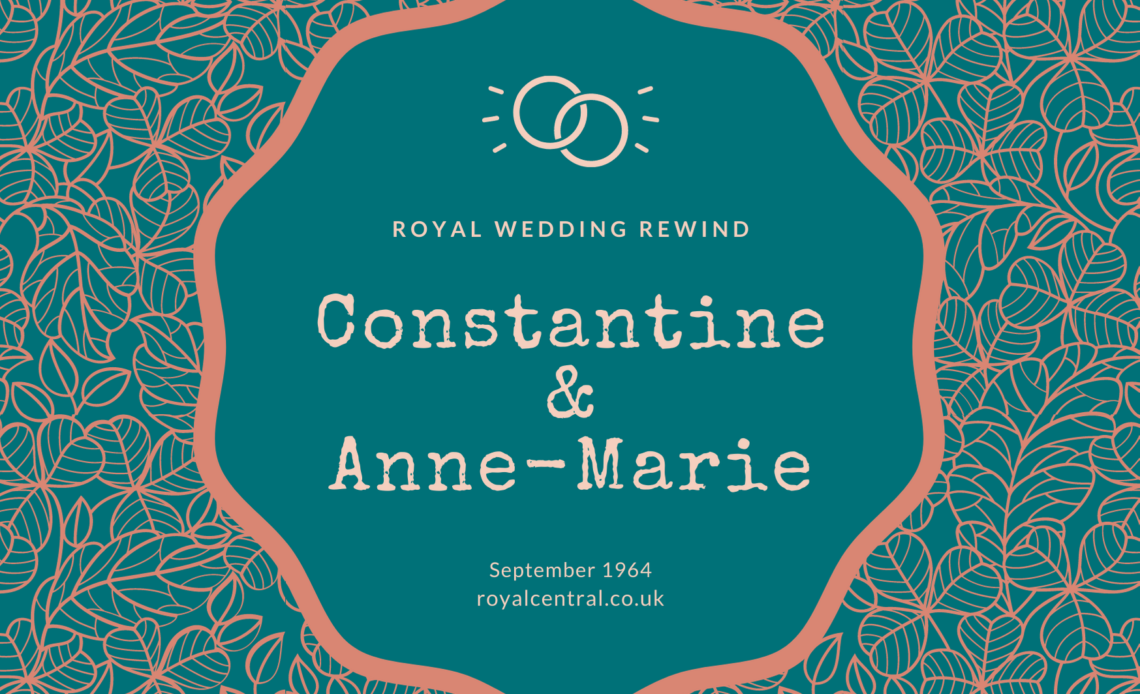 It was a marriage that sealed a famous love story and turned a princess into a queen. On September 18th 1964, royalty from across Europe gathered in Athens to see the continent’s newest monarch wed a bride who had just turned eighteen. Constantine II of Greece and Anne-Marie of Denmark’s romance has since weathered political crises and exile – here’s a look back at a very royal wedding indeed.

Their path to the altar had begun five years earlier when the then Crown Prince Constantine, only son of King Paul and Queen Frederica of Greece, had accompanied his parents on a State Visit to Denmark. There, they had been hosted by King Frederik IX and Queen Ingrid and their three daughters, among them Anne-Marie. Two years later, Constantine and Anne-Marie met again in Denmark, and by the time she acted as bridesmaid to his sister, Sofía, in Athens in May 1962, the couple were smitten.

The Crown Prince of Greece proposed to his Danish princess that summer, but her father had other ideas about marriage. King Frederik insisted that his daughter, still just sixteen, had to complete her education before any wedding could take place while the couple also had to wait to make their engagement public.

The confirmation that the pair were to wed finally came on January 23rd 1963. Twenty-two-year-old Constantine travelled to Copenhagen for the announcement, appearing on the balcony of the Amalienborg Palace with his bride and her family. The wedding was due to take place two years later. However, the death of King Paul in March 1964 turned Constantine into a monarch. Suddenly, marriage plans were accelerated, and the ceremony was set for September that year.

The bride arrived in her new home country in the week before her wedding, having taken part in several days of celebrations back in Denmark. A gala dinner for the couple’s royal guests took place a few days before the marriage at the Royal Palace.

By the time Princess Anne-Marie walked into the Metropolitan Cathedral of the Annunciation in Athens on the arm of her father, she had already converted to the Greek Orthodox faith. The marriage ceremony took place in front of around 1,200 guests including the Prince of Wales. He stood alongside King Baudouin and Queen Fabiola of the Belgians, Queen Juliana of the Netherlands, King Olav V of Norway and King Gustaf VI Adolf of Sweden and dozens of other royal guests for the ceremony which was followed by a reception at the Royal Palace.

The new Queen of Greece had chosen a Danish designer to make her wedding gown. Jorgen Bender’s creation featured a rounded neckline, three quarter length sleeves and an empire line waist which gave way to a full skirt with a train measuring around twenty feet. The bride’s bouquet was dominated by lily of the valley, the sweet-scented flower which denotes a return to happiness in the language of flowers.

All royal brides need a tiara, and Anne-Marie kept things in the family for this part of her bridal look, choosing an all diamond diadem which belonged to her mother. Queen Ingrid of Denmark had inherited the Khedive of Egypt tiara from her mother, Princess Margaret of Connaught, following her untimely death in 1920. Presented to Margaret by the Khedive of Egypt at the time of her marriage in 1905, it features swirling scrolls of diamonds and has been used by all of Ingrid’s female descendants on their wedding days.

Anne-Marie wore it with another family heirloom that provided a link with Margaret, the maternal grandmother she never knew. The tiara anchored in place the Irish lace veil which Margaret had worn at her own wedding and which her only daughter, Ingrid, also chose to use as part of her wedding outfit.

Constantine and Anne-Marie had enjoyed a very romantic royal love story, and the fairytale air continued as they departed for a honeymoon in Corfu. Reality would kick in very soon after their return as political unrest in Greece led to a tumultuous and bumpy reign for Constantine which ultimately led to exile. But their royal wedding remains a glittering moment in a story that continues to fascinate.