Queen Anne of Romania: a queen without a country 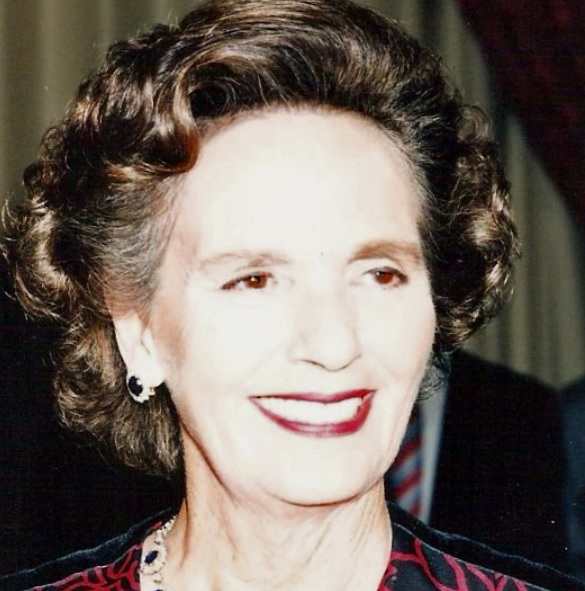 On 13 August, Romania commemorated four years since the funeral of Queen Anne, Romania’s first royal funeral since the burial of Queen Marie in July 1938. Queen Anne of Romania, born Princess of Bourbon-Parma in 1923, died on 1 August 2016, and Romania and Moldova, two republics, held national services in her honour.

A graduate of the New York Parsons School of Design and a former sales assistant at Macy’s, Anne met King Mihai I (Michael) of Romania in November 1947 when they both came to London to attend the wedding of Princess Elizabeth. In an interview with TVR, the seventy-something-year-old Romanian queen, who had a healthy sense of humour, described the meeting with her future husband at Claridge’s Hotel as not particularly romantic: her mother, Princess Margaret of Denmark, who was acquainted with King Mihai’s mother, Queen Mother Helen, invited Anne to meet the Romanian King. Anne, who was half French, had volunteered as an ambulance driver during the war on behalf of General de Gaulle’s army—a service for which she was rewarded with the Croix de Guerre—so, under the momentary emotion, she reverted to her military reflexes and, instead of curtsying, she clicked her heels.

After this (not very graceful) introduction, she was mortified and ran from the room. Still, the King must have seen something in her because he invited her to accompany him and his mother to Lausanne, where he proposed a mere two weeks after their first meeting. In the same interview, the Queen remembers that she accepted the proposal, which the King had made while driving, but according to the King, she first refused him and only accepted after she got to know him a little. (It also seems that the King, who was two years older, had previously seen the Princess-soldier in a war newsreel and, impressed, had asked to be given a likeness of her, which he carried with him until he met her in the flesh.)

During the time spent in London and Lausanne, the young couple was seen going to the movies or walking together, always chaperoned by the Princess’s brothers. According to Queen Anne, it was the first time the King had been to the movies, and she had to show him how to stay in line and how to buy a ticket. The King returned to Romania, where on December 30, he was forced to abdicate by the Soviet-backed Communist government, blackmailed that if he refused, 1,000 students who had been previously imprisoned, would be executed. On January 3 1948, King Mihai I and Queen Mother Helen left Romania via the royal train with only a few pieces of luggage. They were forced to leave in the middle of the night, and, in the train station, the soldiers had been ordered to stand with their backs facing the King. Even so, the King could see tears running down the cheeks of one of them.

The King and the Princess reunited a few weeks later and, eventually, they wed on 10 June 1948 in Athens, Greece. Anne’s parents couldn’t be present at the wedding because she was Roman Catholic and Pope Pius XII refused to give her a dispensation to marry a non-Catholic (King Mihai was Christian Orthodox). Anne’s mother and Mihai’s mother went together to convince the Pope, and when the latter continued to decline to give his consent, the Princess of Denmark pounded her fist on the table in anger. The Pope’s refusal was motivated by the fact that King Mihai had refused to promise that his children would be raised in the Catholic faith, given the fact that, according to Romania’s Constitution, all royal children had to be brought up in the Orthodox tradition.

The couple had five daughters: Margareta, who is now Custodian of the Romanian Crown, Elena, Irina, Sophie, who has inherited her mother’s artistic talent, and Maria. After a few years spent in the British countryside, the couple moved to Switzerland where they lived until they were allowed by the Romanian government to return to Romania. After the King’s return in 1992, when a million people welcomed him on Bucharest’s streets, the government, concerned by his popularity, refused to let him return again until 1997 when they reinstated his citizenship.

Between 1992 and 1997, Queen Anne, who never reigned in her husband’s country, visited Romania numerous times, learning the language, meeting people and getting acquainted with the country’s traditions and customs. At night, she was known to watch Romanian TV for hours in order to learn as much as she could about her new country. A sociable woman full of joie de vivre, she complemented her shy, introvert husband perfectly. Although a strong woman, Queen Anne never put herself first and always acted in her husband’s interest, earning the respect of two republics, Romania and the Republic of Moldova (the latter had been part of Greater Romania until the Soviet takeover). “I am a normal woman, a woman who had the joy of meeting an extraordinary man, King Michael of Romania,” she once declared. At her funeral, a Moldovan teenager with a slight British accent said: “The Queen was close to our hearts because, like her, we know what it means to live in exile.”

Queen Anne is buried in the Curtea de Arges Cathedral, next to her husband, who passed away in 2017, and the rest of Romania’s Royal Family. Her long list of royal cousins includes the reigning monarchs of the United Kingdom, Denmark, Norway, Belgium, Spain and Luxembourg.