Looking at the women behind the Windsor Beauties 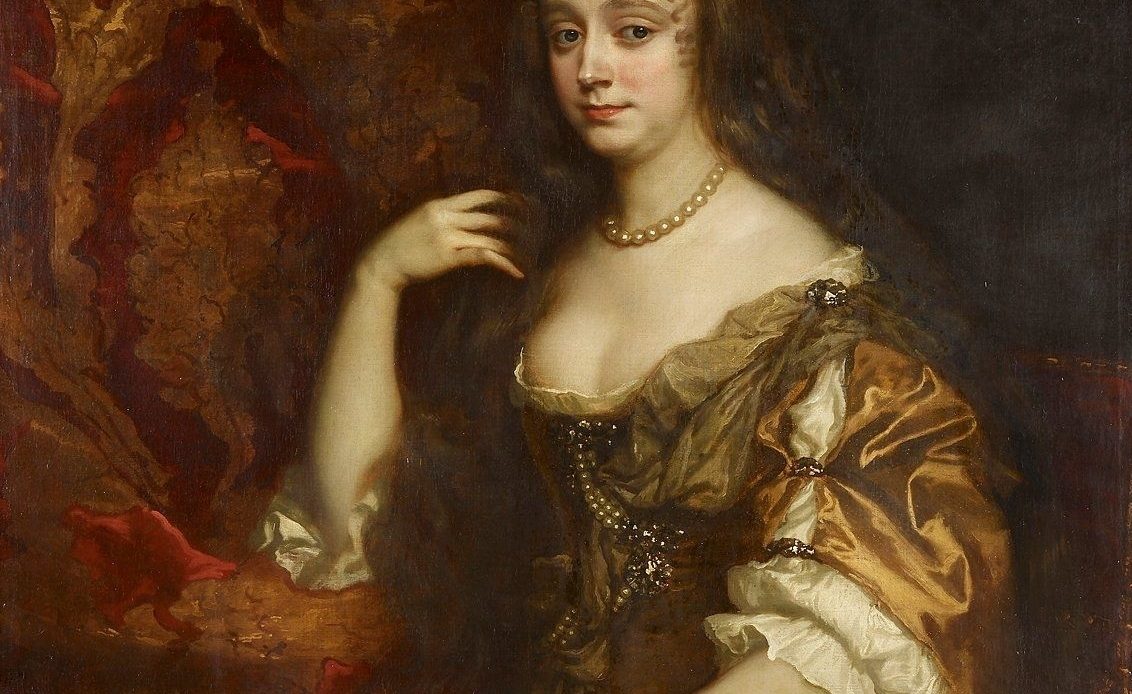 The gallery of so-called ‘Windsor Beauties’ is the name given to the collection of portraits painted by Sir Peter Lely (1618-80) of celebrated courtesans and women of the nobility in Restoration England, which can be seen – and indeed, still admired – in the Communication Gallery at Hampton Court Palace.

Ten portraits today in The Royal Collection can be identified as having belonged to the original group of Lely’s eleven paintings. The Communication Gallery can be found just off of the former 1730’s suite designed by William Kent for the Duke of Cumberland, now displaying a magnificent changing selection of art masterpieces from The Royal Collection, known as the Cumberland Art Gallery; the Communication Gallery itself overlooks Fountain Court.

Probably commissioned in the early 1660’s by Anne Hyde, Duchess of York – first wife of James II – the diarist Samuel Pepys recorded in 1668 that he had seen some of Lely’s portraits of female beauties in the rooms of the Duke of York, but alluded to the fact that they were “not like” – an indication that the beauty is maybe more the result of Lely’s brush. It is appropriate that Pepys commented on the ‘Windsor Beauties’ in his great Diary; his entries confirm his intense and lifelong interest in women, in tones that range from the gallant to the exotic.

Sir Peter Lely was appointed Principal Painter in Ordinary to Charles II in 1661 and was given a court stipend equal to that which had been previously granted to Van Dyck. Lely’s portraits of the celebrated ‘Windsor Beauties’ became some of his most well-known – there is a similar set of Lely female beauties at Althorp, the Spencer ancestral seat in Northamptonshire.

The ‘Windsor Beauties’ should not be confused with the ‘Hampton Court Beauties’, which adorn William III’s Apartments at Hampton Court Palace and were instead painted by Sir Godfrey Kneller in the next generation and commissioned by Anne Hyde’s daughter, the future Mary II. (The 19th century saw the famous ‘Gallery of Beauties’ appear at Nymphenburg Palace, the Wittelsbach summer residence outside Munich). The ‘Windsor Beauties’ hung at the palace of Whitehall after the death of Anne Hyde but were later moved to Windsor – hence the name ‘Windsor Beauties’ – where, during the reign of Queen Anne, they were hung in the Queen’s State Bedchamber. It is not certain exactly when they were moved from Windsor, but the ‘Beauties’ were recorded as being at Hampton Court Palace by the reign of the Hanoverian King William IV.

Frances Stuart, Duchess of Richmond (1648-1702) is probably the first in the series because the portrait was painted before 1662, when Lely was still at a very early stage in his court appointment. Out of all of the ‘Windsor Beauties’, only the beautiful Frances – much admired by Charles II – occupied such a post at the Restoration Court, first as maid of honour and then as Lady of the Bedchamber to Charles II’s queen, Catherine of Braganza. Lely had no need to flatter Frances with his brush. In 1663, Pepys observed the ladies of the Stuart court at Whitehall, including Frances, who wore a hat with a red plume and concluded that she was the most beautiful woman he ever seen, later confiding to his Diary that he had been that night “fancying myself to sport with Mrs Stewart”; two nights later, he imagined the same thing, but this time with Queen Catherine herself.

Pepys described Frances as having a “Roman nose” and an “excellent taille” – thoughts no doubt shared by Charles II, who pursued Frances with enthusiasm. Frances was painted by Lely holding a bow, perhaps a classical Diana-like reference to her famous chastity, which at the Stuart court was certainly unusual enough. Frances eloped in 1667 with Charles Stuart, the third Duke of Richmond and is perhaps best known for the fact that she did not become one of Charles II’s mistresses. Frances was the model for Britannia on the British coinage – Queen Catherine of Braganza was later depicted in turn as Britannia in one of the allegorical paintings at Windsor Castle. Frances’s famous beauty survived an attack of smallpox in 1669, from which she recovered. Following the death of her husband, Frances did not remarry but dedicated herself to her cats and female friends. Frances Stuart hangs amongst the ‘Windsor Beauties’ arguably as the most beautiful – and at the last, she continues to be surrounded by females, as she was in fact at the end of her life.

Elizabeth Hamilton, Countess de Gramont (1641-1708) was born in Ireland as the daughter of Sir George Hamilton and Lady Mary Butler. Elizabeth came to the English court around the time that Lely was appointed Principal Painter in 1661. Known as “La belle Hamilton”, she married Philibert, Count de Gramont in 1663; just visible is the wheel of St. Catherine, another possible reference to Queen Catherine of Braganza. Philibert returned to France the year after their marriage, taking his wife with him, where she became a Dame du Palais to Louis XIV’s queen, Marie Therese. Later, the couple became markedly pious in their way of life, something which one of their two daughters, Marie Elizabeth also pursued, as an abbess. Elizabeth survived her husband by only a year, dying in Paris in 1708.

Barbara Villiers, nee Palmer, Duchess of Cleveland (ca. 1641-1709) was painted by Lely as one of the ‘Windsor Beauties’ in around 1665. Villiers was much admired for her beauty by Pepys, who referred to her in his Diary as ‘Lady Castlemaine’ and mentions her first in 1660. Villiers was one of Charles II’s many mistresses and became a Lady of the Bedchamber to Catherine of Braganza in 1662. Lely painted her many times – as part of the ‘Beauties’ series she appears as the Roman goddess Minerva. She was married to her husband Roger Palmer, at the age of eighteen. Palmer was granted the title of Earl of Castlemaine in 1661 but separated from his wife sometime after the birth of Barbara’s second child; of the six children that she would bear, Charles II acknowledged the paternity of at least five. Barbara ruled more or less as maitresse-en-titre until the arrival of Louise de Keroualle, Duchess of Portsmouth, who became later known as the ‘most absolute of the King’s mistresses’.

Jane Needham, Mrs Myddelton (1646-92) was the daughter of Sir Robert Needham of Lambeth and his second wife Jane Cockayne; she was baptised in Lambeth Church in 1646, the same church where she would later marry Charles Myddleton, 3rd son of the second Sir Thomas Myddelton, Kt., of Chirk Castle and Kevenywerne, Ruabon, in the year of the Restoration. Despite her married status, Jane Needham was still pursued by many male admirers, including Charles II, the Duke of York and even apparently, Philibert de Gramont, the husband of Elizabeth Hamilton. She was a supposed mistress of Ralph Montagu, 1st Duke of Montagu – husband of Elizabeth Percy, Countess of Northumberland – and later of Lawrence Hyde, 1st Earl of Rochester. John Evelyn called her “That famous, & indeede incomparable beautifull Lady” in his Diary.

Margaret Brooke, Lady Denham (1647-1667) was the daughter of the English soldier and politician Sir William Brooke, who was a Member of Parliament for Rochester and his second wife, Penelope Hill. She became a “public” mistress (Pepys’s Diary, 7.1.1667) of the Duke of York and was married to Anglo-Irish poet, Sir John Denham. Pepys’s Diary records that he found out about her death (“my Lady Denham”) in a coach on his way to the Temple and that it took place on 6 January 1667, her early death having given rise to much speculation, even to the extent that she had been poisoned. The Hon. Frances Brooke, Lady Whitmore (ca. 1640-90) was a sister of Margaret Brooke, Lady Denham and a daughter of Sir William Brooke by Penelope Hill. She married Sir Thomas Whitmore sometime before 1665 and sat for Lely’s series of ‘Windsor Beauties’ as her sister had done.

Mary, Countess of Falmouth and Dorset (1645-79) was a beauty of the Restoration court and the daughter of Col. Henry Bagot and his wife, Dorothea Arden. Unlike some of the portraits of the other ‘Windsor Beauties’, who appeared in contemporary dress, Lely painted her in classical attire, recalling the designs of antiquity in her loose-flowing robes and sky-blue silks. She married Charles Berkeley, 1st Earl of Falmouth in 1664. Charles died the following year at sea during the Battle of Lowestoft, having been hit by a cannonball aboard the HMS Royal Charles, which was under the command of the Duke of York. She later married Charles Sackville, 6th Earl of Dorset – an earlier Countess of Dorset had in fact been the official governess of the infant future Charles II.

Henrietta Hyde, Countess of Rochester (1646-87) was the daughter of Sir Robert Boyle, 2nd Earl of Cork and his wife, Elizabeth Boyle. She was painted by Lely as one of the ‘Beauties’ in around 1665, the year that she married Lawrence Hyde, 1st Earl of Rochester – the same Earl of Rochester who later supposedly took Jane Needham as his mistress. Through this marriage, Henrietta became sister-in-law to Anne Hyde, the Duchess of York and in fact later held the post of governess to Anne’s daughter, the future Queen Anne.

Anne Spencer, Countess of Sunderland (ca. 1646-1715) was the daughter of George Digby, 2nd Earl of Bristol and his wife, the Lady Anne Russell. She married Robert Spencer, 2nd Earl of Sunderland in 1665. The portrait of Anne Spencer is probably from the studio of Sir Peter Lely, because the inscription on the Lely at Althorp bears the date of 1666. Pepys mentions the preparations for her marriage in his Diary in 1663. Anne Spencer was a lady-in-waiting to the future James II’s second wife, Mary of Modena and was herself a close friend of Sarah Churchill, Duchess of Marlborough. The Marlborough linked with properly cemented with the marriage of her son Charles, 3rd Earl of Sunderland to Anne Churchill, Sarah Churchill’s second surviving daughter.

Painted in many cases around the time that each sitter married, the ‘Beauties’ have lost none of their power to charm. Was Lely’s choice of them random? As Lely was the court’s Principal Painter, it is perhaps not so unusual that some of the ‘Beauties’ share connections with each other. Yet it is still a curiosity that these Restoration ‘Beauties’ hang together in the same gallery at Hampton Court and yet are linked in many other ways too, through shared acquaintances or admirers, family associations or blood-ties. Had they been themselves in reality together in this way, whether they would have enjoyed the experience is questionable – perhaps Barbara Villiers would have minded her portrait being in the same series as that of the beautiful Frances Stuart – on whom she played innocent tricks to subdue?  Would they have admired themselves or been happier to be admired? One rather supposes the latter.