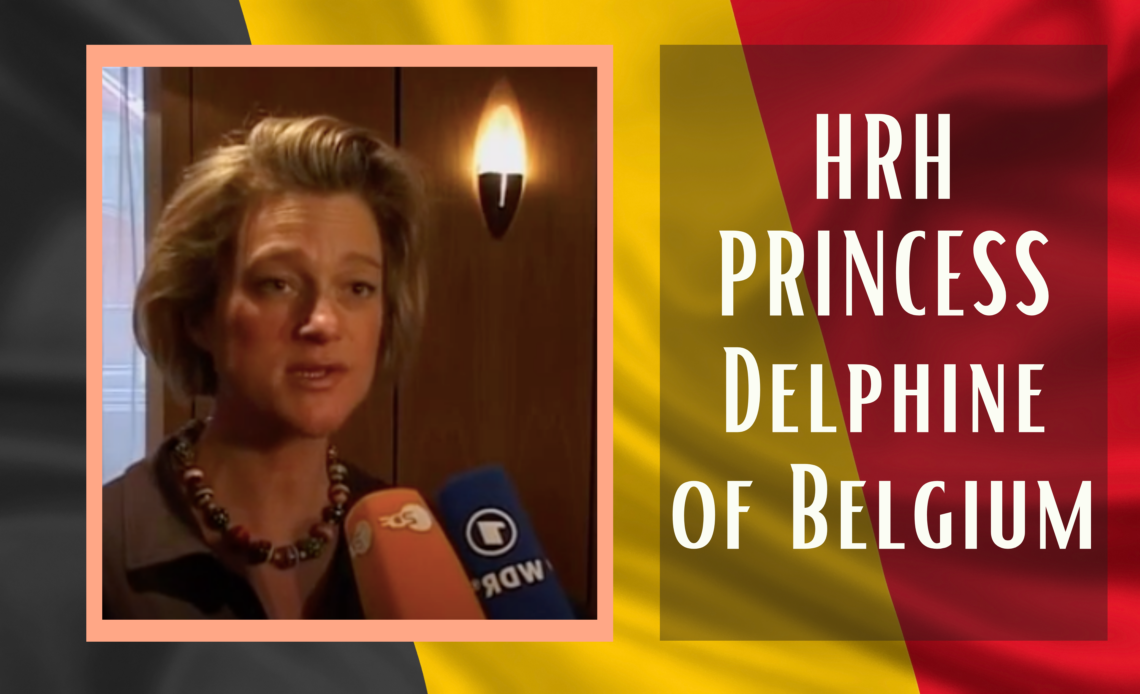 Delphine Boël, the acknowledged illegitimate daughter of King Albert II of Belgium, has been granted the title of Princess of Belgium with the style of Her Royal Highness, her lawyer has confirmed.

Her new official name will Delphine of Saxe-Coburg (van Saksen-Coburg). Her children Josephine (16) and Oscar (12) will also be recognised as Princess and Prince with the style of Their Royal Highness.

Delphine has been fighting to be recognised as the daughter of King Albert II, who abdicated in favour of his son King Philippe in 2013, for many years. The case came to a head in 2019 when the former King was finally forced to undergo a DNA-test under threat of a 5,000 euro a day penalty for refusing to take the DNA-test.

Princess Delphine’s new title brings to an end an eight-year-long legal battle between father and daughter. But who exactly is Belgium’s newest Princess? Here is her story.

On the 22nd of February 1968, a little girl named Delphine Michèle Anne Marie Ghislaine Boël was born in Uccle, close to Brussels. Her parents are Sybille de Selys Longchamps, a Belgian baroness and King Albert of the Belgians. This last fact, however, was only revealed to her at the age of 17. At the time of her birth, both her mother and father were married but not to each other. Her mother gave birth to Delphine on her own while her father, then Prince Albert, was waiting outside in the car. On her birth certificate, the name of Sybille’s husband, Jacques Boël was written next to “father” as this happens automatically when one is married.

Let’s go back to the summer of 1966. Sybille de Selys Longchamps was married to the industrialist Jacques Boël at the time, but it was not a happy marriage. Happy to be able to escape from her marriage, the young woman joined her father in Athens, where he worked as the Belgian Ambassador to Greece. She was only there for a few hours when they received a message from Prince Albert of Belgium. His boat had engine troubles and his cousin and himself wanted to spend some time at the embassy while they waited for the boat to be repaired. And that is how the two met. Their relationship developed at a fast pace, and after only three weeks, Prince Albert declared his love for Sybille. The Belgian Prince was married to Princess Paola at that time, but they were struggling.

Once they both returned to Belgium, they remained in touch and kept seeing each other on and off. The Baroness had ended her relationship with Jacques Boël, but they remained legally married. Also, Prince Albert and Princess Paola lived two separate lives with the annual family holiday as their only reunion.

From the birth of Delphine until she was about eight-years-old, Delphine saw Prince Albert every day. He lived almost permanently with her and her mother on the Belgian coast. The three of them often went on family holidays, but out of sight, they were constantly hiding. The relationship between Albert and Sybille lasted around 16-17 years. During that time, almost everyone in the Belgian Royal Family was aware of the affair, also Albert’s wife, Paola. The Prince and Princess almost divorced which was very extraordinary at the time. After the affair, Prince Albert reunited with his wife, Princess Paola. In 2019, they celebrated their 60th wedding anniversary.

In 1999, the news broke that then King Albert of Belgium had an illegitimate daughter. It was Queen Paola’s biographer who mentioned it in one of his books. Nevertheless, the King remained in contact with his daughter. He sent her small gifts for birthdays and holidays. Until right before the 34th birthday of Delphine, Albert, all of a sudden, broke off all contact. Delphine and her mother tried to contact the King for years, but he refused. After many efforts, Delphine held a last phone call with the King in which he reportedly stated that he was not her father. Sybille de Selys Longchamps said about this moment: “If you know a little about psychology, you know that you never recover when your father rejects you. You will never get over that.”

Fast forward to 2013. Delphine Boël is happily married and has two children. She has become a famous and talented artist and a recurring theme in her artwork is her struggle for recognition and the pains of rejection. In 2013, Delphine filed a lawsuit against King Albert in which she demanded that he publically recognise her as his daughter. Ever since, it became publicly known that she was the illegitimate daughter of the King, Delphine, her mother, children and other family members were listed as “dangerous persons” or “threats to the state” which has caused a lot of trouble for them at the bank and for travelling abroad. In an interview in 2014, Delphine Boël stated: “I want the word “illegitimate” to disappear from my name.”

In October 2018, the Court of Appeal ruled that Delphine Boël, King Albert and Delphine’s mother Sybille de Selys Longchamps had until the 7th of February 2019 to take a DNA test to determine the paternity of Delphine. King Albert refused to take part in such a test. The lawyers of King Albert objected to the court’s ruling and took the case to the Court of Cassation which was their last resort. However, the Court of Cassation ruled that no errors were made during the trial and that the King was still forced to take the DNA test. If not, the refusal could be considered as “proof” that he was indeed her father.

Fast forward to the 27th of January 2020, in a statement through his lawyer, King Albert admitted that Delphine Boël is indeed his natural daughter. It was most definitely not a warm welcome but that was never the purpose of Delphine’s case. She wanted to be recognised and her honour to be restored, and this is also because of her children. Delphine has also stated through her lawyer, that she will not ask for any money nor is she interested in a title.

Now that King Albert has officially recognised Delphine as his daughter, the Court of Appeal will have to confirm the recognition and pronounce the legal paternity of King Albert. This is, however, only a formality. And this will be the end of a very long legal, emotional, expensive and hard struggle for Delphine Boël and her family.