Anne: a year in the life of an ever-busy princess 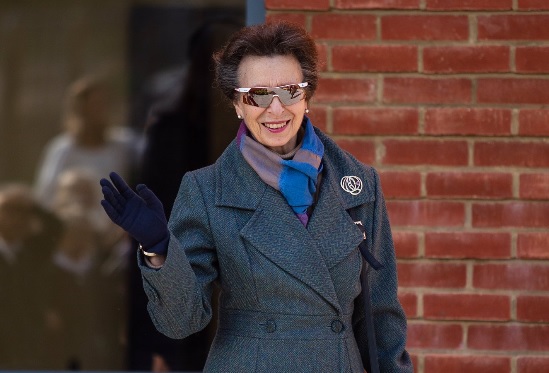 With restrictions easing and diaries filling up, things are starting to look like they once were. As the world hits a milestone in the global health crisis and the Princess celebrates her 71st birthday, Royal Central is taking a look back at the year the Princess has had.

August 2020, the Princess celebrated her 70th birthday. On the actual birthday itself, 15 August, three official portraits of the Princess at her Gatcombe Park home were released. It wasn’t the first brush with royalty for photographer John Swannell. Previously, he’s photographed The Queen for her official Golden and Diamond Jubilee Portraits. He also worked with Anne on numerous occasions including the portraits for her 40th, 50th, and 60th birthdays.

Also in August, The Queen’s second child took up the role of General and Air Chief Marshal, bringing her ranks in line with her rank in the Royal Navy. It’s a tradition that as senior royals get older, they are treated as military members and receive promotions.

In September, the Princess spent Hidden Heroes Day at Bullingdon Prison. The day is to celebrate those working in prisons and within the justice system. During the global health crisis, the justice system in the UK had to quickly adapt with many court hearings switching to video calls. The Princess visited as Patron of the Butler Trust, a charity that is dedicated to recognising outstanding practice by those who work with offenders.

The 70th birthday celebrations continued well into autumn. In October, three of the Princess’s Ladies-in-Waiting were honoured by The Queen in her delayed 2020 Birthday Honours List. Leonora, Countess of Lichfield, Araminta Ritchie, and Jane Holderness-Roddam all serve as Ladies-in-Waiting to Princess Anne, and became Commanders of the Royal Victorian Order. The order is awarded to those who have personally served the Monarch with distinction.

The Princess would also continue to support those working on the frontlines during the pandemic. She visited Scarborough Hospital in North Yorkshire to show appreciation for the work the NHS has done and hear firsthand what it had been like to work in the medical industry during such a critical time.

November saw the second England-wide lockdown of 2020. While restrictions were in place, Anne continued engagements including meeting virtually with the Royal New Zealand Nursing Corps, the Royal Canadian Medical Society, and World Horse Welfare. She also took part in the Royal Family’s Remembrance acts by laying a wreath at the Cenotaph.

In December, Anne continued online engagements by meeting with the Wellington Trust, the Blues and Royals, Wise, and UK Youth. The Princess would also make an appearance at a special reception given by The Queen at Windsor Castle to show support for frontline workers in the area.

On 8 January 2021, the Princess made one of her first public appearances of the year from her Gloucestershire home, Gatcombe Park. She met with seven scholars from the Oxford Farming Conference via Zoom, serving in her role as Honorary President.

In March, Anne became a grandmother for the fifth time. Her daughter, Zara Tindall, welcomed her third child with her husband, Mike. Lucas Philip Tindall was born 21 March at the Tindall family home on the Gatcombe Park estate.

April would mark an emotional time for the Royal Family. Anne’s father, Prince Philip, died at the age of 99 at Windsor Castle on 9 April. Like her siblings, the Princess shared a statement following her father’s death:

“You know it’s going to happen but you are never really ready. My father has been my teacher, my supporter and my critic, but mostly it is his example of a life well lived and service freely given that I most wanted to emulate. His ability to treat every person as an individual in their own right with their own skills comes through all the organisations with which he was involved.

“I regard it as an honour and a privilege to have been asked to follow in his footsteps and it has been a pleasure to have kept him in touch with their activities. I know how much he meant to them, in the UK, across the Commonwealth and in the wider world.

“I would like to emphasise how much the family appreciate the messages and memories of so many people whose lives he also touched.  We will miss him but he leaves a legacy which can inspire us all.”

Anne, alongside Prince Charles, led the funeral procession behind Prince Philip’s personally-designed Land Rover hearse as his casket made its way to St George’s Chapel for his funeral on April 17 2021. Following a period of mourning, Anne along with other members of the Royal Family returned to their duties at the end of the month.

In May to mark her 70th birthday, the Princess lent her name to a charity appeal for unpaid carers. The Princess, who is President of Carers Trust, helped launch The Princess Royal Respite Fund for Carers. It’s an organisation aimed at supporting 30,000 unpaid carers over the next three years with  £3 million in donations from trusts, foundations, members of the public, and major donors.

June was full steam ahead for members of the Royal Family as their diaries started to fill with summer engagements. The Princess found herself in Dorset for a visit to the 13th Signal Regiment at their base at Blandford Forum where she cut a cake for the first anniversary of their formation. She would also travel to Lockleaze in Bristol in her role as patron of Gloucestershire Rugby Football team, to thanking those for their service to the community.

At the end of the month, the Princess joined The Queen in Scotland for the second half of Holyrood Week. The duo visited The Children’s Wood Project in Glasgow, a dedicated green space that’s been built specifically to bring communities together with different outdoor activities. On a different occasion, the duo visited The Edinburgh Climate Change Institute where they spoke to staff and students about their research on how the effects of climate change can be reversed.

Anne would also be busy ahead of the 2020 Summer Olympics as she is chair of the International Olympic Committee Members Election Commission. With concerns over the ongoing global health crisis, the meetings were held virtually.

The Princess started off July with a visit to Northern Ireland for a full day of engagements to celebrate the 100 year anniversary of Northern Ireland, and to thank volunteers for their efforts during the global health crisis. Also early on in the month, Anne received a special lifetime achievement award. She was presented with the City Livery Club’s delayed 2020 Root & Branch Lifetime Achievement Award which recognises the Princess for her long involvement with the City Livery Club.

Upon the start of the 2020 Olympic games, the Princess sent a good luck message to Team GB as the final countdown to the games got underway. President of the British Olympic Association, she told the team ”This is your Olympics. It will be different, but not in its importance to you. Savour it, and above all, enjoy it.”

The Princess’s diary stayed full until the end of the month. Among her engagements, Anne opened a new mental health hospital on Merseyside, as well as the new RFCA Headquarters for the North West of England and Isle of Man. The dog-loving Princess would also find herself at the new Lucky Pup dog-friendly cafe at Cannon Hall Farm near Barnsley.

As her 71st birthday approached, the Princesshas continued her royal duties. On 5 August, she presided over an Investiture Ceremony at St James’s Palace, celebrating recipients for their work in healthcare, justice, arts, and culture. The ceremonies had been put on hold for the duration of the global health crisis. In a normal year, there could be up to 30 separate ceremonies. The Queen, the Prince of Wales, and the Duke of Cambridge are the only other three to carry out this duty.