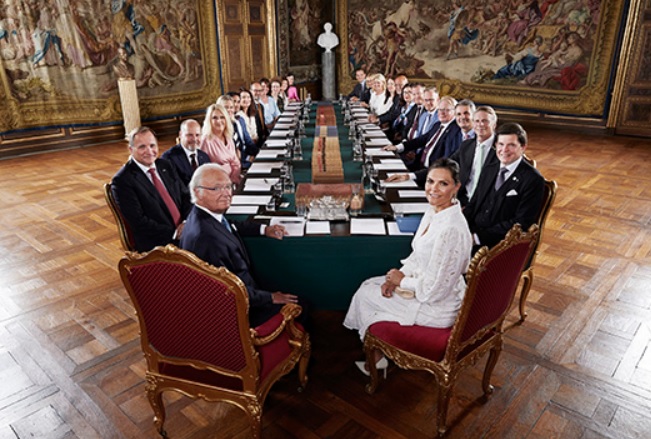 King Carl XVI Gustaf has overseen a special gathering at the Royal Palace in Stockholm as Sweden saw a Prime Minister only recently voted out of power take the reins of government once more.

As the Swedish monarch welcomed Stefan Lofven and his new administration to a council meeting that marks the start of their tenure, he spoke of his own place in the politics of chte country.

Addressing the council, which was also attended by his heir, Crown Princess Victoria, King Carl Gustaf said ”this year is 100 years since the first Swedish parliamentary elections with universal and equal suffrage were held. For almost half that time, almost 48 years, I have been Sweden’s king and head of state. And thus I have led a number of these special councils, here at the Royal Palace.”

The King of Sweden reflected on the instability that has affected his country’s government and parliament in recent times, noting ”Governments have taken office, resigned and been reorganized. Not infrequently with some turbulence. But always in good democratic order.…different perceptions have been handled in an orderly manner. The democratic processes have worked as intended in our constitution.”

It’s less than two weeks since King Carl Gustaf held an audience with Stefan Lofven as he stepped back as Sweden’s Prime Minister. The leader of the Social Democrats had been forced to give up power when his coalition government crumbled after one party, the Left, withdrew support in June over policies on rent controls on new flats. Lofven scrambled to rebuild his minority coalition and was narrowly re-elected as Prime Minister by Sweden’s parliament, The country’s rules mean a politician can take the position if a majority of the 349 MPs in parliament don’t vote against them. Lofven was backed by 116 MPs and opposed by 173, just meeting the criteria.

However, he had admitted that governing will be hard and he is already struggling to find majority backing for his budget, due this autumn. Sweden’s next general elections are due in 2022.