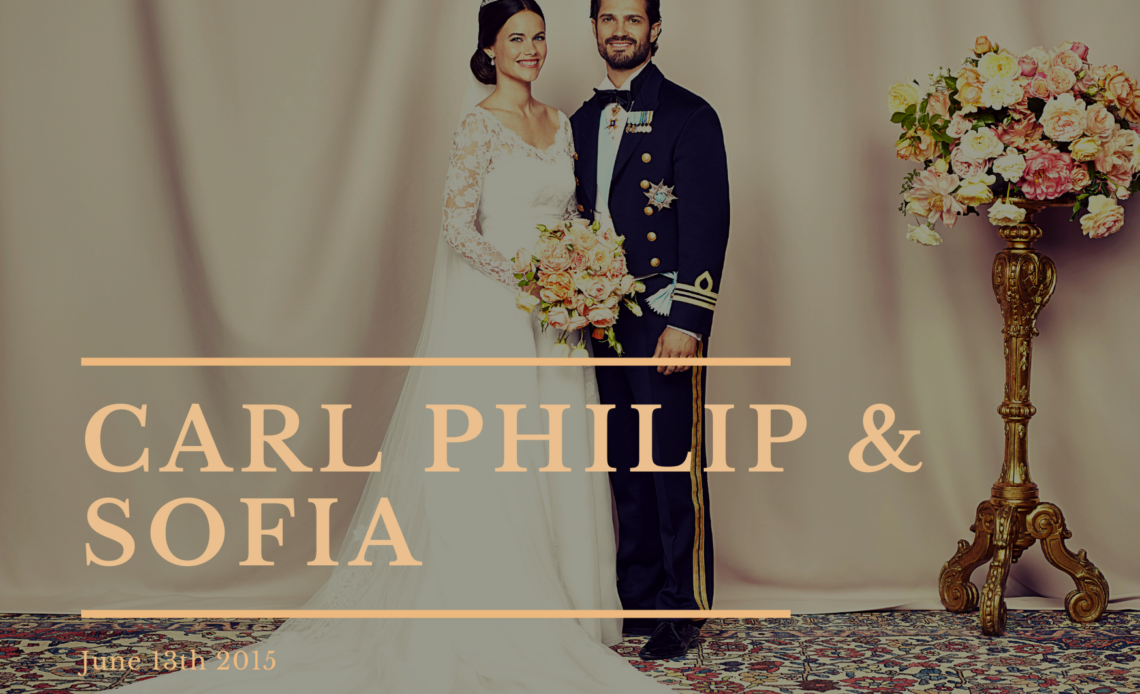 When the news broke that Prince Carl Philip of Sweden was dating former reality show participant and model Sofia Hellqvist, a flood of criticism followed. Many doubted that this most unlikely romance would be sealed by marriage. Today, Prince Carl Philip and Princess Sofia celebrate six years of marriage.

In the summer of 2009, Prince Carl Philip met Sofia Hellqvist through mutual friends at a nightclub in Båstad, Southern Sweden. The Prince was enjoying his bachelor life after breaking up with his girlfriend of nearly ten years, Emma Pernald. Meanwhile, Sofia Hellqvist had just returned to her home country after spending four years studying in New York City. The pair had met each other on other occasions before but they only started talking at that encounter.

The couple tried very hard to keep their relationship away from the press. Whenever they went to the movies, they entered separately. Whenever they spoke to each other on the phone, they used different names and so on. However, in early 2010, the news broke that the only son of King Carl XVI Gustaf and Queen Silvia of Sweden was dating a former reality show star and glamour model with several tattoos. It is safe to say that this was not what the Swedes had expected.

In the months following the news, the Swedish media dug up all kinds of unflattering and bold pictures of Sofia. During her time as a student, Ms Hellqvist worked as a glamour model and posed topless with a boa constrictor around her neck for the men’s magazine Slitz. After the shoot, Sofia was named ‘Miss Slitz 2004’. A year later, Sofia appeared on a reality tv-show called “Paradise Hotel” in which six singles live together at a luxury resort. In addition to all the stories about her student years, also the relationship between Sofia and the Royal Family was questioned. Carl Philip and Sofia later admitted that these rumours hurt the couple the most because they were untrue. Sofia stated she was welcomed in the family from day one.

Against all odds, the Royal Court of Sweden announced the engagement of His Royal Highness Prince Carl Philip and Ms Sofia Hellqvist on the 27th of June 2014. Earlier that day, Prince Carl Philip went down on one knee to ask his girlfriend of four years to marry him. In the late afternoon, the engagement was announced, and the pair posed in front of the Royal Palace of Stockholm. The couple decided not to reveal much about the exact proposal but confirmed that it was at a special place for them.

A year later on the 13th of June 2015, Prince Carl Philip and Princess Sofia were married during a ceremony in the Royal Chapel of the Royal Palace of Stockholm. In addition to becoming Princess of Sweden, Sofia also received the title of Duchess of Värmland. The day before, an informal dinner was held for friends and family.

Princess Sofia opted for a custom-made lace wedding dress by the Swedish designer Ida Sjöstedt for her big day. Her wedding dress was accompanied by a long veil with lace on the sides and a diamond tiara with emeralds on top – a wedding gift of her parents-in-law. The bride wore myrtle in both her hair and bouquet, a Swedish royal wedding tradition since 1905. Despite all the criticism Sofia had experienced over the previous years, she proudly showed off her large tattoo on her upper back.

Prince Carl Philip wore his military uniform from the Swedish Amphibious Corps accompanied by the sash of the Order of the Seraphim and the Order of the Polar Star around his neck. The groom was escorted by his best man, Jan-Åke Hansson into the Royal Chapel.

Many foreign royal guests attended the royal wedding on a very hot summer day in June 2015. Among others, Queen Máxima of the Netherlands, Queen Mathilde of the Belgians, the Crown Prince Couple of Denmark, the Crown Prince Couple of Norway, the Earl and Countess of Wessex, Queen Sonja of Norway and Prince Carl Philip’s godmother, Queen Margrethe of Denmark witnessed the union.

Of course, the Swedish Royal Family was in full attendance. Prince Carl Philip’s godchild and niece, Princess Estelle played a central role in the ceremony as one of the bridesmaids. The groom’s younger sister, Princess Madeleine, was heavily pregnant with her second child, Prince Nicolas, at the time – giving birth only two days after the wedding.

Upon entering the Royal Chapel, guests saw the striking and large number of flowers decorating the chapel. The pair had chosen various shades of cream and coral as their colour scheme, and the floral arrangments included roses, peonies, carnations, hydrangea and fuchsia. The decorations were a masterpiece by the Court’s florist, Claes Carlsson and his team of 45 florists.

Even though the Prince and Princess opted for a traditional Evangelical Lutheran ceremony, many personal elements were included. This was reflected in their music choices as “Fix You” by Coldplay was performed, and a Swedish customised version of Rihanna’s hit “Umbrella” was also played. Upon leaving the Chapel, “Joyful Joyful” from the popular movie Sister Act was performed which resulted in many of the royal guests clapping and dancing on their way out.

After the ceremony, the newlyweds took a carriage ride through the city of Stockholm to greet wellwishers. The couple then appeared with their families on the balcony at Logården. The Prince made a short speech in which he thanked the Swedes for the warm welcome his wife received as a new Princess of Sweden. The pair smiled and waved while they were treated to applause and “Hurrahs” from the crowd. They appeared to be so impressed by all the wellwishers, that they almost forgot their “mandatory kiss”.

A special treat for the public was that also the wedding speeches, cake cutting and first dance were broadcast live on the Swedish national television. The highlight of the evening was, without a doubt, Princess Sofia’s unexpected speech and the song she had written for her husband in which she declared her love. The song was performed by Molly Sanden and Danny Saucedo and moved the Prince to tears.

After the cutting of the cake, the newlywed couple performed their first dance to another special song, “Sofias Brudvals.”

On 19 April 2016, the Duke and Duchess of Värmland welcomed their first child, Prince Alexander. A little over a year later, on 31 August 2017, the couple’s second son, Prince Gabriel was born. Their third son, Prince Julian, was born on 26 March 2021.

Carl Philip and Sofia’s wedding features in a new book from Royal Central, out now. Royal Weddings, A Collection is on sale as a paperback and an ebook at Amazon.