Which royals we will see at Queen Margrethe’s Golden Jubilee banquet? 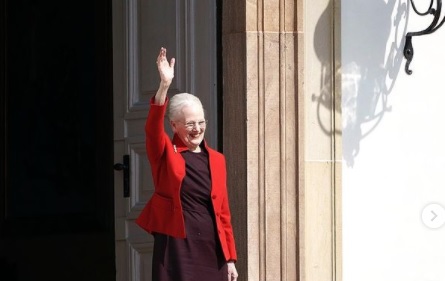 The year 2022 will mark Queen Margrethe II of Denmark’s Golden Jubilee – her 50th year on the throne – and, like many important occasions, it will be marked in style.

Events to celebrate the occasion will include homages to her father, King Frederik IX, who passed away on the 14th of January 1972, making Margrethe Queen, but also a special Parliament session, a gala evening at the Royal Theatre and a banquet where Her Majesty will host local and foreign dignitaries, including royals from all around Europe.

Pending travel restrictions and health issues, the presence of the Greek Royals is almost certain – Queen Anne-Marie of Greece was born Princess Anne-Marie of Denmark and is Queen Margrethe’s younger sister.

Other potentially obvious presences would be members of other Scandinavian monarchies, specifically Sweden and Norway. At her previous Jubilee dinner (her 45th anniversary on the throne back in 2017), only the monarchs were present, with Sweden sending King Carl XVI Gustaf and Queen Silvia (with an injured shoulder), and Norway only sending King Harald, since Queen Sonja was in New York at the time for an official engagement. But, of course, it is also possible that the two countries could send their heirs, Crown Princess Victoria and Prince Daniel, for Sweden and Crown Prince Haakon and Crown Princess Mette-Marit for Norway.

Moving down south, and we can expect the Netherlands and Belgium to send representatives as well. In 2017, we saw King Willem-Alexander and Queen Máxima and King Philippe and Queen Mathilde, respectively. However, while I would venture to say that the Dutch kingdom will be represented in some form, Belgium has always been more “elusive”, and it is not clear whether or not they will send anyone.

The further down south we go, the less likely it is that someone will be there; Luxembourg and Spain’s royals were both represented in 2017, but they are not always featured. It is unclear whether they will manage to travel to Copenhagen to celebrate with Queen Margrethe. The more likely options for Luxembourg are either Grand Duke Henri and Grand Duchess Maria Teresa or the Hereditary Grand-Ducal Couple Guillaume and Stéphanie. For Spain, the only viable option is King Felipe and Queen Letizia, who, because of their very busy schedules, have missed several foreign appointments.

And finally, two principalities that were not represented in 2017 but that form part of the currently reigning European royals are Monaco and Liechtenstein. It seems highly unlikely that they will send anyone, although Monaco is often represented by Princess Caroline in more high profile events abroad.

But the biggest and most notable absence during the 45th anniversary celebrations was anyone representing the United Kingdom. Generally, the Earl and Countess of Wessex make the trip to represent the British royals at major foreign events, but in 2017 no one was there. Pending travel restrictions, it is reasonable to expect someone from the UK to be there, and it may well be Prince Edward and his wife.

As for the non-reigning royals, Princess Benedikte will definitely bring with her several members of the Sayn-Wittgenstein-Berleburgs with her, as she married into the family when she became the wife of Prince Richard. So again, a representation of the Greek royals is almost certain, while other non-reigning branches of European royalty may not be represented because of health and safety restrictions.