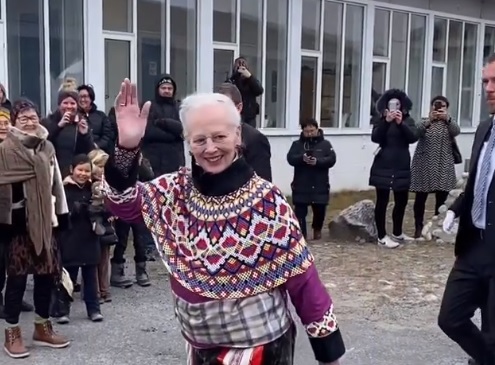 Queen Margrethe of Denmark has concluded her official visit to Greenland. At the invitation of the chairman of the Greenlandic parliament, the Naalakkersuisut, Múte B. Egede, Her Majesty the Queen started her visit on October 9th 2021 and concluded it on October 12th.

The five-day long visit took in Ilulissat, Nuuk, Pituffik and Station Nord. It was full winter when the Queen arrived and the temperature was cold, about twenty degrees Celsius below zero.

On 12 October, the last day of the visit, the Queen visited Station Nord, which is the northernmost place in Greenland, where there is a permanent crew all year round. During her visit to the station, which is only 933 kilometres from the North Pole, the Queen was informed about the crew’s diverse work tasks, which include supporting the Armed Forces’ units in Greenland, including the Sled Patrol Sirius, and keeping the runway ready.

In connection with the visit, Her Majesty the Queen drove about two kilometres away from the station, where the Greenlandic self-government in collaboration with Danish Aarhus University and the Danish Armed Forces runs a climate station. Here, air pollutants, air temperatures and pressures as well as outgoing radiation and UVB radiation are measured.

Station Nord was built in 1952 as a weather and telecommunications station and emergency landing site. In 1972, the station was shut down, but re-emerged three years later as a military station. The small area consists of a series of buildings with a runway, which is maintained by five people all year round.