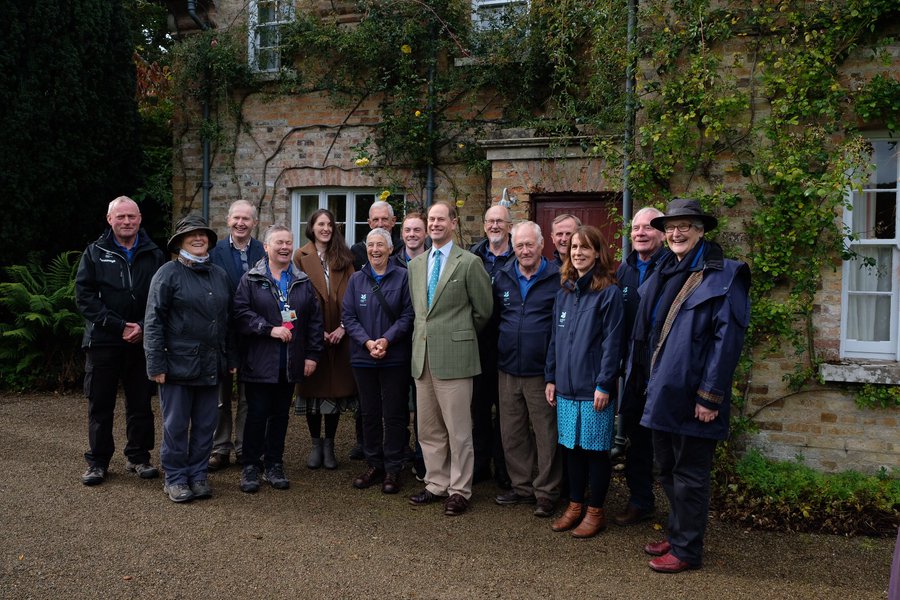 The Earl of Wessex spent the day getting back to nature in Northern Ireland Wednesday as he visited a newly remodelled 1930s garden at a historic home, helped launch a new Scouting facility, and celebrated the 25th anniversary of a community care centre.

The Earl kicked off his two-day visit to Northern Ireland by travelling back in time to the 1930s at the newly renovated kitchen gardens at Florence Court, an 18th century home in County Fermanagh. After the royal helicopter landed he was greeted by local schoolchildren along with Heather McLachlan, Regional Director for the National Trust NI and Jim Chestnutt, General Manager for Florence Court. He then joined the property’s longest-serving tour guide, Heather Hamilton, for an introduction to the house.

“We were privileged to welcome Prince Edward to Florence Court today,” said McLachlan on the National Trust website. “This is a very exciting time for the property as the project to restore the Kitchen Garden to its 1930s character and atmosphere escalates. From small beginnings in 2009 led by a team of property volunteers, this 2-acre garden which had been neglected and overgrown for 60 years is now on the cusp of a significant revival, restoring its heritage, reconnecting it with people and its past, and offering fresh and meaningful experiences for people and communities to get more involved.”

The Earl of Wessex met National Trust volunteers who have helped to restore the walled garden, including the longest-serving volunteer at the garden, Jules Caithness, who has worked on the project for the past eight years.

The Earl then travelled to open the Fermanagh Centre for Scouts. The £400,000 extension to the facilities is situated within a UNESCO Global Geo Park along a wooded glen next to the River Claddagh.

The rain didn’t dampen @UKScouting’s spirits as The Earl of Wessex opened the Fermanagh Centre! ?

The centre is located in a UNESCO Global Geo Park, built along a wooded glen, next to the River Cladagh, and features brand new facilities for Scouts of all ages to enjoy. pic.twitter.com/21TzEp5F78

“I have to warn you that the unveiling of a plaque is not necessarily the most exciting thing that has happened in your lives,” he said, but the crowd cheered anyway as he raised the flag in the pouring rain.

During his visit, the Earl of Wessex met Scouts from across County Fermanagh and joined in on bushcraft activities (and even tomahawk throwing) whilst speaking “with group leaders about how Scouts provide young people with skills for life.”

The Queen, who was a Girl Guide in her youth, serves as patron of UK Scouting whilst the Duchess of Cambridge also is involved as a volunteer with Scouts. The Earl works with the Duke of Edinburgh’s Award, a programme which many Scouts also choose to take part in.

Next, he stopped by the Lakeland Community Care Centre in Belcoo, which is marking its 25th anniversary this year. The Earl of Wessex joined community members in the anniversary celebrations, including a very enthusiastic cake cutting ceremony.

The community centre offers a variety of care options for rural Fermanagh residents such as adult daycare, help with household tasks, shopping, and more. They also have space for social and sport activities to improve socialisation in older residents.

The Earl of Wessex toured the community garden and learned about a mental health initiative called the Men’s Shed. “The shed provides a space for men to chat and take part in practical activities; in the hope of reducing loneliness and isolation,” the Royal Family said on Twitter.