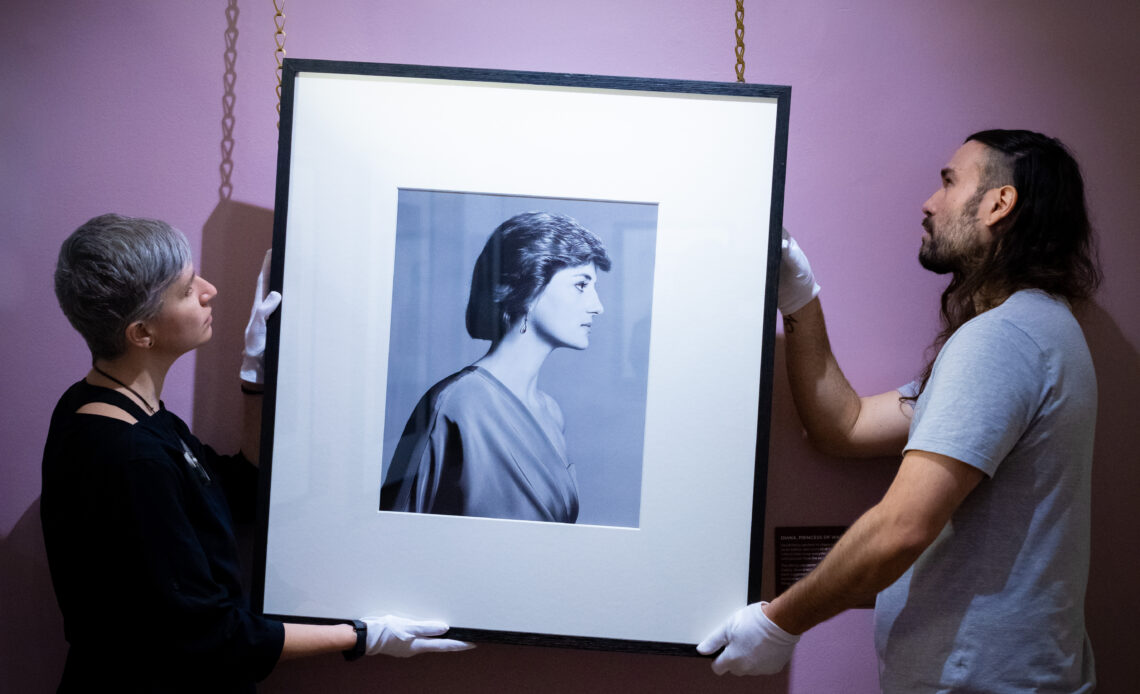 A previously unseen portrait of Diana, Princess of Wales is among the photos on show in a new exhibition opening at her former home, Kensington Palace.

The picture, taken by David Bailey is part of a new event in Jubilee year, Life Through a Royal Lens, which examines the relationship between royalty and photography. The snap was taken in 1988 for one of Diana’s patronages but never shared until now.

It hangs at the centre of the exhibition on the way that the art of photography has helped shape the modern image of royalty and how the Royal Family has used that to try and control its public face. And the display includes other previously unseen images alongside some of the most famous royal photos of modern times.

Life Through A Royal Lens starts with a reminder of that famous quote ”I have to be seen to be believed” and what follows is a fascinating journey through the deep interest that royalty has had in the power of photography for over 150 years. From Queen Victoria and Prince Albert’s fascination with the new art of picture taking to the Duchess of Cambridge’s subtle takeover of official royal photos, it highlights the power that one single image can have over the story of a royal dynasty.

Hundreds of royal images are pulled together in displays focused on family, ceremonial and the media. You’ll find iconic images like the famous photo of Princess Margaret wearing a tiara in the bath and the hologram of The Queen alongside real family snapshots including a sweet picture of Princess Alexandra sent to the future Edward VII when their families were first discussing the possibility of them marrying. Royal albums are also on show allowing dozens of snaps, pasted into books, to tell the tale of a family over decades.

This is also the story of innovation and the driving forces are unexpected. A major theme throughout the exhibition is The Queen’s determination to explore new photographic methods and styles, a pursuit which has allowed the royal image to remain fresh throughout her record breaking reign. Another key theme is the role that George V and George VI played in establishing strong relations between the Royal Family and the photographic press, both keenly aware that one good image can tell a thousand stories in itself. The exhibition also includes a screen with photos taken by members of the public over the years to underline how royalty is always on show.

There are some unexpected treats, too. I loved the 1895 photo of Queen Victoria knitting which was taken, at her insistence, by one of the few female photographers working professionally at the time and which was chosen for the front of the prestigious London Illustrated News for a piece called ‘Inside the Longest Reign in History”. Another favourite was a contact sheet of photos of The Queen with a newborn Prince Edward in which the Monarch is caught, unawares, by a lens as she nuzzles her tiny son with eyes closed, the image of maternal bliss. Queen Mary digging for potatoes is a royal treat that needs no explanation, just time to enjoy it in all its glory.

Many of these moments, like the Diana portrait, have never been shared before. What makes this exhibition so interesting is them being placed alongside much more familiar royal photos. It’s a reminder that a famous picture takes a lot of work. Hundreds of images of royal events are taken but just a handful last the test of time. Elizabeth II’s celebrated Coronation portraits are seen with the hastily taken shots that didn’t make the cut while the display also shows her children at play at the end of her long train while she smiled for the cameras.

A walk through the exhibition is a walk through royal history, surrounded by moments that have become symbolic of the House of Windsor in the 20th century. There’s also some fun interaction with a magical royal photo album that responds to a wave and the chance to light up Queen Victoria.

Life Through A Royal Lens is perhaps more relevant in 2022 than it has ever been as social media means the royal story is told in images within moments of it happening. This exhibition, in Platinum Jubilee year, provides food for thought as well as some spectacular images.

Life Through A Royal Lens is on at Kensington Palace from March 4th 2022 until October 30th 2022 and admission is included in the entry ticket to the Palace. More details on the Historic Royal Palaces website.