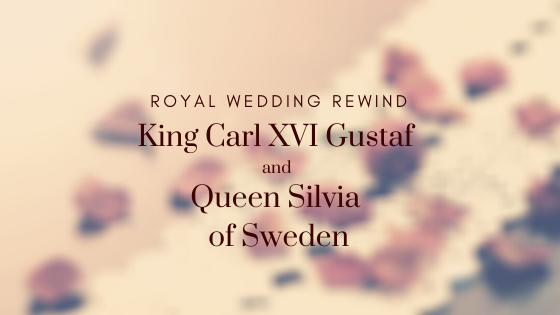 It was an historic royal wedding which created a consort. When Silvia Sommerlath married King Carl XVI Gustaf of Sweden on June 19th 1976, she became the country’s queen as she said her vows. The couple are now marking their 45th wedding anniversary. Let’s rewind to June 19th 1976 for the wedding of King Carl XVI Gustaf and Queen Silvia of Sweden.

Carl XVI Gustaf had been King of Sweden for just over two years when he confirmed he would marry Silvia Sommerlath, whom he had met at the 1972 Munich Olympics where she was working. The king famously said things ”just clicked” between them at that moment and they announced their engagement on March 12th 1976. The wedding date was set for June 19th when Silvia would become the first woman to marry a reigning King of Sweden in almost 200 years. The night before the wedding, a special gala show was put on as part of the celebrations with ABBA taking to the stage where they performed ‘Dancing Queen’ for the first time.

The couple picked Stockholm Cathedral for their marriage and in the hours before the ceremony, it was decorated with a new breed of rose named ”Queen Silvia” in honour of the bride. Crowns belonging to King Erik XIV and Queen Louisa Ulrika had been placed on blue cushions by the altar. The church was packed with royal gusts including Queen Margrethe II and Prince Henrik of Denmark, Queen Ingrid of Denmark, King Olav of Norway, Grand Duke Jean and Grand Duchess Josephine-Charlotte of Luxembourg, Princess Beatrix of the Netherlands and the Duke and Duchess of Gloucester. They stood to greet the bride and groom as, following tradition, they entered the church together for the marriage ceremony which was conducted by Olof Sundby, Archbishop of Uppsala.

The bride wore a simple white duchess silk dress designed by Marc Bohan of Dior. It featured a rounded neckline on a loosely fitted bodice that flowed into a slightly flared full length skirt. The new Queen of Sweden wore one of the most famous tiaras in the royal collection, the Cameo, which had been used by two of the king’s sisters at their marriages and which had once belonged to the Empress Josephine. Silvia’s wedding veil was another Swedish royal heirloom. The cream lace had also been worn by Carl Gustaf’s sisters for their weddings although Silvia had to arrange it rather differently when it turned out to be too long for her train. The bride’s bouquet featured orchids, jasmine, lily of the valley and stephanotis as well as myrtle from a plant growing at the Swedish royal residence of Sofiero. Silvia also wore sprigs of the myrtle in her hair, another Swedish royal wedding tradition.

After the ceremony, the new Queen of Sweden and her husband were cheered through the streets of Stockholm by huge crowds who watched their wedding carriage procession. They then boarded the royal barge, Vasaorden, and sailed across to the Royal Palace for a balcony appearance and their wedding reception.

Queen Silvia quickly became a popular royal while her first born child, Victoria, made history when succession laws were changed allowing women to stand in line to the throne. Victoria not only gained the right to succeed, she became heiress, supplanting her younger brother. The family formed by Carl Gustaf and Silvia has helped to cement their popularity as has the couple’s duty as working royals. Forty five years on from their big day, it remains a royal wedding to remember.

There is lots more about this historic royal wedding in our new anthology, out now. Royal Weddings, A Collection is on sale as a paperback and an ebook at Amazon.